A friend whom I met during the Economic Freedom Network (EFN) Asia conference in Hong Kong in 2004, Chatib "Dede" Basri, has been appointed yesterday as the Finance Minister by Indonesian President Susilo Bambang Yudhoyono.

In his presentation nine years ago in HK, I remember that two of his slides showed a quote from Adam Smith,


[The rich] consume little more than the poor… They are led by an invisible hand … and thus without intending it, without knowing it, advance the interest of the society, and afford means to the multiplication of the species.

And from Milton Friedman, something like "The politicians and bureaucrats, they are led by an invisible hand and without intending it, without knowing it, advance their own interest over that of society."

I liked his presentation. He is a soft spoken yet highly articulate and intelligent guy. He got his PhD Econ from the Australia National University (ANU). During the EFN Asia conference in Kuala Lumpur in 2005, he was supposed to come too but he did not arrive. He was at that time, the Director of the Institute for Economic and Social Research Faculty, University of Indonesia.

Here are two news reports today from the Jakarta Globe.

By Jakarta Globe on 9:23 am May 21, 2013.
http://www.thejakartaglobe.com/opinion/editorial-free-market-thinker-to-lead-finance/ 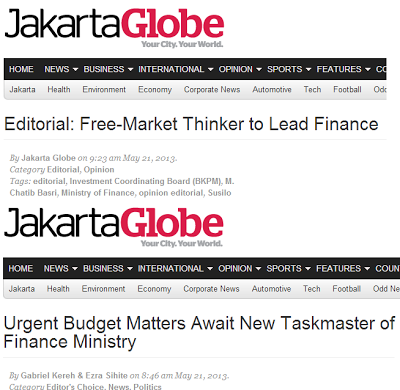 The appointment of M. Chatib Basri as the fourth finance minister under President Susilo Bambang Yudhoyono is a welcome move. The new minister has the requisite experience, but more importantly he understands the needs of the business community.

As he settles unto his new post after a successful stint at the Investment Coordinating Board (BKPM), Chatib will have to tackle several key issues immediately. These include keeping the budget deficit from exploding, dealing with the fuel subsidy issue and boosting tax collection.

These are not easy challenges, but Chatib has the experience, skills set and economic knowledge to make the right decisions.

The most pressing challenge will be to deal with ever-rising fuel subsidies. It is clear that the state cannot afford to fund fuel subsidies without causing serious damage to the state budget and macroeconomic stability. But managing the political implications of raising fuel prices will require skill and a significant amount of socialization.

On this score, his apolitical stance will stand him in good stead. Political parties cannot accuse him of politicking or favoring any side. But he will have to work hard to get legislation on his side.

Chatib is also probably the best person to improve the investment climate given his time at BKPM, where he cut red tape significantly. He will have to continue these efforts at the Finance Ministry. If he is able to streamline bureaucracy, he will have made a major contribution to improving both the investment as well as the business climate in the country.

A soft-spoken man, Chatib is nonetheless a forceful economic thinker. He is a free-market advocate who supports free enterprise, which is critical in ensuring that Indonesia remains an open economy. His appointment is good for the country and the economy.

Tackling the national budget will be a recurring experience for M. Chatib Basri, who becomes the fourth finance minister in the administration of President Susilo Bambang Yudhoyono.

Among the priorities to tackle are fuel subsidies, the budget deficit and tax collection, according to business leaders.

Yudhoyono has said that the subsidized fuel price will increase by a third to Rp 6,000 (61 cents) a liter in order to reduce the burden on the state budget.

He warned last month that the budget deficit could widen to 3.8 percent of gross domestic product if no action was taken to curb the use of subsidized fuel. The budget deficit is currently at 2.5 percent of GDP, below the legal limit of 3 percent. Fuel subsidies are estimated to cost about $20 billion this year alone.

As a person not affiliated with any political party, Chatib will have to polish his political skills in working with other ministries, the House of Representatives and opposition parties, said Didik J. Rachbini, a senior economist and member of the National Economic Committee (KEN), which advises the president.

“He [Chatib] is a professional. He knows all the technical things that he needs to do,” Didik said. “Nonetheless, he also needs to know about the art of politics. Political actualization needs to be shown. He needs to have good networking with the House, opposition and political parties in order to do this.

“He has to be able to do this. But I think he can. I mean, the orientation of the House, the parties and other ministries are to help the people of Indonesia to prosper. This could be seen as a meeting point of interests despite all the differences that might exist,” Didik said. “My response toward him as the new minister of finance is positive. He seems like a capable man. Let’s give him room to do more.”

Yudhoyono said on Monday in announcing Chatib’s appointment at the State Palace in Jakarta that Chatib should maintain the country’s prudent fiscal policy amid volatility in the global economy.

“[The state budget] has to be kept healthy, that needs a prudent fiscal policy,” the president said.

The second task is to improve the country’s investment climate. Yudhoyono said that the new finance minister should be able to provide incentives — such as tax breaks — to attract more investment.

Third, Yudhoyono asked Chatib, who will be inaugurated as finance chief today, to support sectors that provide many jobs….

Suryo Bambang Sulisto, chairman of the Indonesian Chamber of Commerce (Kadin), said that Chatib’s experience as head of the BKPM helped him in understanding many aspects of the economy.

“We hope the new finance minister could cooperate better with the business sector in order to create a more conducive business climate and to boost the performance of our real sector, especially in trades and industries.