Below is a research proposal that I submitted to the East Asia Development Network (EADN) for a regional research competition (RRC) on the theme, "Toward a More Resilient Society". Among the factors that they want to be discussed by research proponents is "disaster risk management in disaster-prone countries" and hence, is related to (man-made) climate change.

Even if I know that this kind of research competition is tailored for the climate alarmists and planet saviours, I still joined the competition. My would-be partner in the research project is my PDE classmate and now Ateneo de Manila University, Economics professor Joey Sescon.

To make the story short, our proposal was not accepted. There should be many factors why, including a big number of research contestants who submitted better-written or better-packaged proposals. Anyway, I am posting a portion of the research proposal that I submitted, below.
------------


How to Improve Resilience in Facing Global Cooling and Financial Turmoil

I. Research Questions and Background

How much global cooling can we expect in the coming decades?
Implications in flooding in the tropics, damages to crops, private properties, public infrastructures, civilian casualties?
Policy options both at the micro and household level, and macro and government level?

Over the past 2,000 years, climate change has shifted from global warming for about six centuries during the medieval warm period (MWP) to global cooling and a little ice age (LIA) for about four centuries, and back to warming over the past century. 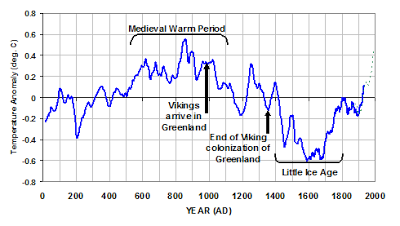 Source: Dr. Roy Spencer, presentation at the 2nd International Conference on Climate Change (ICCC), New York Marriott Hotel, NYC, March 8-10, 2009.
(Note: The team leader of this paper has attended that conference, as well as the 4th ICCC held in Chicago, Illinois, May 16-18, 2010)

Since the start of this century, global temperature has stagnated over the past 15 years, and showed a decline in recent years. Chart below compares temperature projections (by the UN IPCC, different models) vs. actual global air temperature, composite for Northern hemisphere + Tropics + Southern hemisphere, satellite data from 1979 to March 2013, as interpreted and plotted by the  University of Alabama in Huntsville (UAH) and Remote Sensing System (RSS). The disconnect between projections (more warming) vs. actual data (stagnation or cooling) is getting wider. 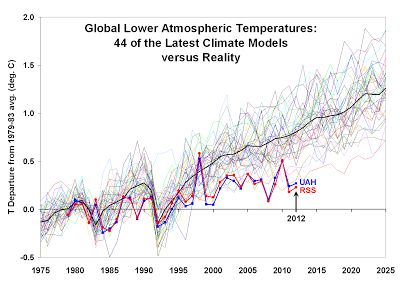 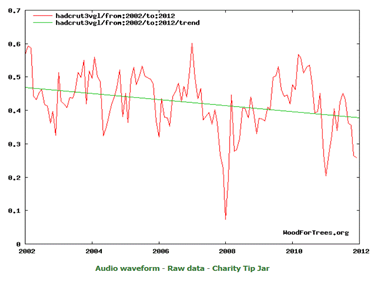 So as the planet enters the global cooling phase, we should expect that the frequent occurrence of heavy rains/snow and flooding in recent years will become even more frequent and severe that can approximate the LIA several centuries ago. Major damages to some public and private properties, high crop damages, high casualty figures from those heavy flooding and brutal winters, can be expected.

This chart shows that the major financial and human losses since the last decade were due to severe flooding and strong hurricanes and storms, other than strong earthquakes and tsunami. Not one major catastrophe was due to severe drought. 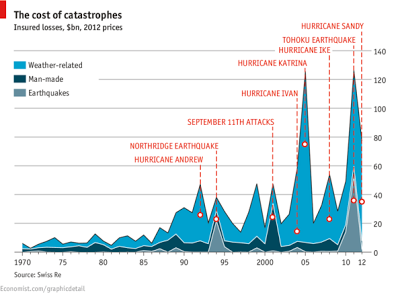 Recognition of the reality of nature-made global cooling as opposed to anthropogenic global warming (AGW) or anthropogenic climate change will enable households and governments to institute more practical and cost-effective policies. Preliminary recommendations to improve resilience against global cooling and frequent flooding, test their practicality would include, among others:

·         Households should avoid living in low-lying areas, or leave those areas and move to higher elevation. Or if they live in one-storey bungalow houses,  consider building a second or even third floor, to their house.

·         Governments, national and local, should invest significantly in dredging creeks, rivers and lakes, big and small, to improve their water catchment capacity. Low lying areas with few residential structures may be cleared of human settlements, be dug and converted to water catchments or mini-lakes.

·         Governments to invest in more boats and amphibian vehicles for quick search and rescue work during heavy flooding. Public and private drainage system be de-clogged to minimize street flooding.

·         Subsidies or higher energy prices for renewables like wind and solar should be reviewed, encourage cheaper and more stable energy sources that do not require subsidies.

The book, Climate Change Reconsidered: Report of the Non-governmental International Panel on Climate Change (NIPCC), 2009, Chicago, published by the Heartland Institute, offers a comprehensive discussion of the physical science basis of climate change and cycles.

Another book, Climatism, deals with clarifying certain misconceptions on climate and human economic activities, and how energy policies should not be distorted.
------------

… On the other side of the account, terrestrial coverage has declined sharply over recent decades. For this and other reasons, the HadCRUT4 record takes explicit account of three distinct species of uncertainty: measurement and sampling, bias, and coverage. Combining the effects of these three, the 2 σ uncertainty bounds today are approximately one-sixth of a Celsius degree either side of the central estimate: 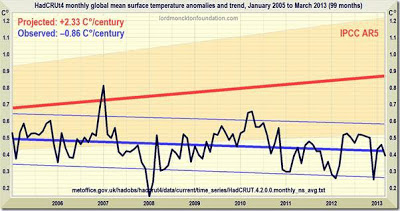 …. The discrepancy between the projections in the IPCC’s Fifth Assessment Report (red central projection bounded by orange region) and the outturn in HadCRUT4 (bright blue trend-line) is startling. The difference between the observed cooling at 0.86 Cº/century and the predicted warming of 2.33 Cº/century is equivalent to a hefty 3.2 Cº/century.