Jeju -- Today is our third day here in the Jeju Forum for Peace and Prosperity held in this big and sprawling Haevichi Hotel&Resort, southern island of South Korea. I am one of the 13 people from the EFN Asia and FNF Korea team who came here from Seoul last Wednesday, led by Lars Andre Richter, the Country Representative of FNF Korea (5th from left), and Pett Jurapaiboon of EFN Asia (4th from right). Our group photo on our first night here. Only Sam Rainsy from Cambodia not present here. 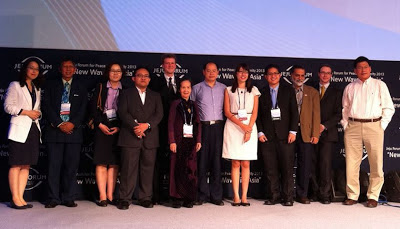 On Day 1 (May 29) afternoon, I attended session [2-A], "Making Ideas Work: Challenges and Opportunities for Think Tanks in Asia". 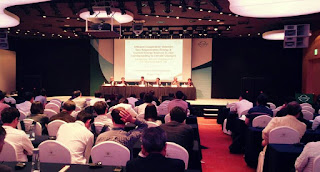 Dr. Yi mentioned at the start that the University of Pennsylvania's Think Tanks and Civil Society Program (TTCSP) has listed two Japanese and three Chinese institutions in the world’s 50 best think tanks, and none from Korea. So the Koreans are wondering how to strengthen the competitiveness of their think tanks.

Among the factors identified to attain this is autonomy of think tanks from big businesses and government funding, consistent research topics and direction and strengthen specialization, balance relevance, influence and independence, and involve civil society.

Mr. Kang said that the Samsung Economic Research Institute (SERI) is perhaps the best think tank in Korea, with wide range of research areas from engineering to economics, especially after the 1997 financial crisis, it expanded its research work beyond science and engineering. But SERI is for Samsung mainly, not for the entire country.

The Korea Development Institute (KDI) was powerful in the 80s but not so now.

Mr. Kawaguchi said that their think tank also has varied research areas but the bulk is on engineering, 58 percent of total resources devoted to various engineering R&D, then 20 percent for basic science, 11 percent economics, and 5 percent each on law and politics, and sociology. I was wondering why Mitsubishi would be interested in sociology, perhaps to help them understand consumer behavior in other countries and cultures.

Mr. Yeoh of ASLI in Malysia said that those think tanks that have clear strategic vision are more successful. They have active engagement with many sectors, public, private and civil society. They have good communications strategy in mainstream and social media. And have good monitoring and feedback mechanism to trace their effectiveness.

focus more on applied research, leave basic research to universities. They are able to maintain their independence by getting funding from different and diverse sources. In particular, they should not get any funding from government.

Among the specialized areas that think tanks should deal and do more research are on regional and trade integration, environmental studies, CC, inclusive growth, disease control, etc.

There was a short open forum after the discussants have spoken. I was the last to make a comment/question from the audience as time was running out. I said that governments now are the main creators of economic uncertainties and instability, like what is happening in Europe, the US fiscal cliff, Japan, etc. Their huge and rising public debt is the main generator of such instability. Government think tanks including the multilaterals like the WB, IMF, ADB, are the rah-rah boys of more spending, with recent magic words like "inclusive growth" and fighting inequality, on top of fighting climate change.

Thus, think tanks should be more independent from government, and check further expansion of government spending and roles.
------------