One measurement of economic growth or expansion of material wealth other than growth rate in gross domestic product (GDP) is the absolute increase in GDP size between two reference points or years.

The IMF’s latest World Economic Outlook (WEO) was released in April 2013, and it has a more accurate measurement or estimation of country GDP for 2012 compared to WEO’s October 2012 issue.

Here are the largest economies in the world based on their nominal GDP (ie, unadjusted for inflation), 15 years gap from 1997 to 2012. Five Asian countries are able to land in the top 20: Japan, China, Korea, India and Taiwan in 1997, and China, Japan, India, Korea and Indonesia in 2012. 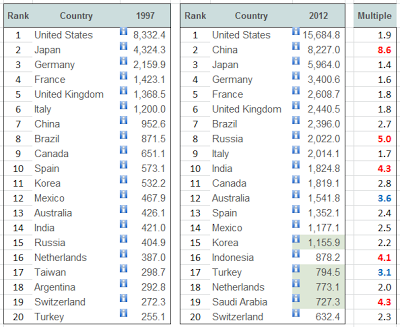 What is notable is the huge jump in material wealth of some countries in a span of just 15 years: 8.6 x for China, 5x for Russia, 4.3x for India and Saudi Arabia, and 4x for Indonesia. Australia and Turkey were able to expand their GDP more than 3x over the same 15 years period.

In contrast, the big economies of North America and Europe outside Russia were able to expand their wealth only between 1.7x to 2.8x. In South America, only Brazil and Mexico are able to join the top 20.

Let us now look at the other big countries. The oil-exporting countries like Iran, Venezuela, United Arab Emirates were able to multiply their national wealth by 4x to 5x in just 15 years. The huge world oil price hikes in recent years were mainly responsible for this big jump in their GDP size. The same explanation can be said for Russia, Indonesia and Saudi Arabia in Table 1 above. 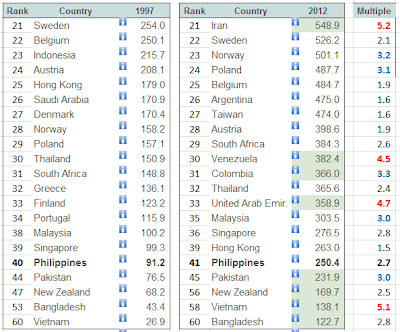 Previously heavily-repressed economy Vietnam was able to grow 5x its GDP size after various economic liberalization policies. One factor though is the under-reporting or under-statement of economic activities in the 90s, so when they were more reported and accounted, the growth is very big.

Despite high growth in recent years, the dollar value of Philippine nominal GDP of $250 billion in 2012 was smaller than those of Hong Kong and Singapore.

Countries have different valuation of the same goods and services produced. For instance, a taxi ride per  kilometer in the US or UK or Japan would be around 5x to 10x more costly than in the Philippines or Indonesia. To correct this hyper valuation in other countries compared to other countries for similar goods and services produced, GDP are valued on purchasing power parity (PPP). The result is interesting.

First, India is now the 3rd biggest economy in the world next to the US and China, displacing Japan now in 4th place. Whereas in nominal GDP, India is only 10th largest worldwide. 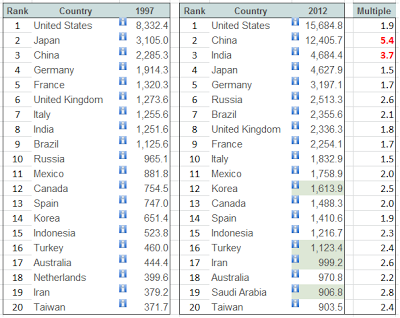 Third, six of the top 20 largest economies in the world as of last year are Asians, eight if Middle East Asian countries like Iran and Saudi Arabia are included.

Fourth, the big population countries are in the frontline of the top seven huge economies.

For the other big economies, here is the ranking. 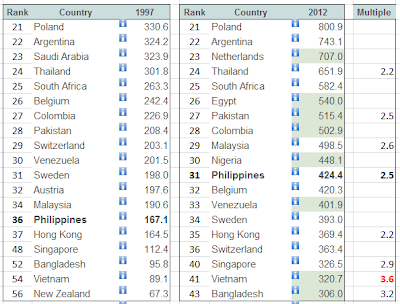 Near-free trade, or at least less-protectionism environment, has allowed many Asian economies to grow fast, thanks to their large population (more workers, more entrepreneurs, more consumers) and piecemeal transition towards democracy and less dictatorship. Many Asian countries are actually far out compared to the level of democracy and respect of the rule of law that many European and North American societies have achieved.

The “Asian Century” continues to emerge with each passing year. This is a good opportunity for the Philippines to grow fast too. If only we can reduce bureaucratism, statism, and the politics of envy. Then potential growth can be attained which is often higher than actual growth.