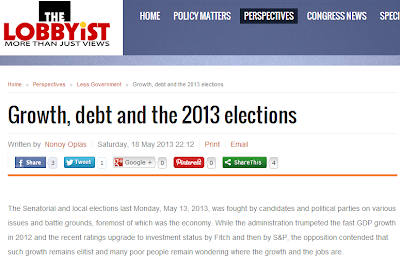 The Senatorial and local elections last Monday, May 13, 2013, was fought by candidates and political parties on various issues and battle grounds, foremost of which was the economy. While the administration trumpeted the fast GDP growth in 2012 and the recent ratings upgrade to investment status by Fitch and then by S&P, the opposition contended that such growth remains elitist and many poor people remain wondering where the growth and the jobs are.

From a cursory review of certain macroeconomic figures taken from The Economist, the following can be summarized:

One, economic growth of the biggest economies in North America and Europe remain non-impressive if not anemic. While the US and Canada are expected to grow 2+ percent this year and the next (1.7 percent in 2013 for Canada), their unemployment rate remains high at more than seven percent as of March 2013.

Two, the Euro area maintains its low growth, even contraction this year for Italy, Greece, Netherlands and Spain. Unemployment rate for Greece and Spain remains very high at 26 to 27 percent, something that is unthinkable for many Asian economies.

Three, Asia will retain their generally bullish outlook to be led by huge population economies China, India, Indonesia, Philippines and Vietnam. Their unemployment rates though are at medium rates of 4 to 9.9 percent. Inflation rates are projected to remain mild at only two to six percent, except in Vietnam and India that are seen to reach up to 10 percent. 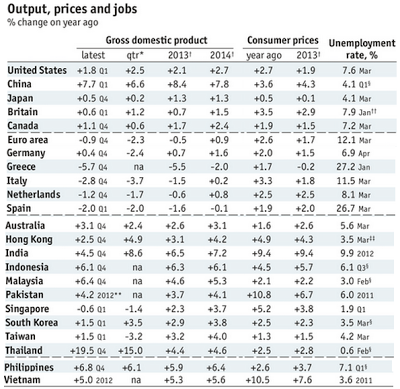 An “inclusive growth” that used to be called “broad-based growth”, of more equitable distribution of growth, income and assets, is the main demand coming from more sectors and players in the economy. Which simply means that people want more jobs, good paying jobs and benefits. Then people will be  able to move up the wage levels through time.

These are modest and understandable demand. A rising and growing economy like the Philippines as shown in the above table should be able to generally comply with these modest expectations. Such job creation need not come from big corporations or the government and its many agencies and offices. More importantly, job creation can come from the people themselves through micro- and small entrepreneurship, medium-sized enterprises with backward and forward linkages with the micro and small enterprises.

Most of the campaign promises of the local and national politicians were focused on fighting corruption and having good governance. It seems that only very few of them proposed to reduce the arbitrary power of those in government to grant business permits and licenses.

Promises of more welfare and subsidies, like universal healthcare, universal education from elementary to college levels, universal housing and relocation, were sure attention grabbing for the voters. But such promises are not new, they have been promised by earlier politicians many decades ago. And high expectations often lead to high disappointment.

There are limits to what the government can provide because it is heavily indebted in the first place. A big portion of the total annual budget, about P1 out of P5, goes to interest payment alone. The public debt stock is rising by around P400 billion a year, mostly due to domestic borrowings. 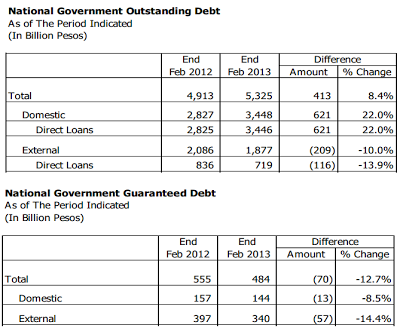 The counting of the election result, even if it was automated, remains slow. This does not seem to be consistent with ensuring credible results. Credibility of the result is the most important consideration of an election, more than the victory of the administration or the opposition. Credible elections, credible justice system and enforcement of rules will produce more long-term positive effect for the economy and the people.

Now that the political and electoral battles are over, it is time to go back to plain economics – how to create more jobs, how to expand more goods and services, so that people can stand on their own in uplifting their own lives without depending too much on the politicians and the government.

Things are generally not so good at the global economy. The Eurozone for instance, nine of its 17 member-countries are now in recession; the average unemployment rate in the Eurozone was a high 11.4 percent in 2012, and is projected to rise further to 12.2 percent this year. Greece and Spain are in worse shape with unemployment rate of nearly 27 percent.

Many investors and traders abroad are hoping that the Philippine economy can provide them the proper economic environment to put their money and talent here, both in the short- and long-term. Let us not frustrate them in their basic expectation. The poor here badly need more jobs, better pay, more goods and services produced in our own soil.