Today, I read three stories of the SARS-like virus that has affected Saudi Arabia, and bird flu virus in  China. 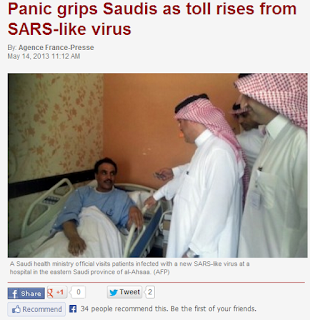 Some 15 people have already died in Saudi Arabia alone, from SARS-like coronavirus. There are some panic especially in the eastern part of the country. See the news here.

A follow up article, also today, New SARS-like virus can probably pass person-to-person. In one family alone in Eastern Saudi Arabia, the father died and the three children got sick too with similar symptoms, two are in the ICU already. 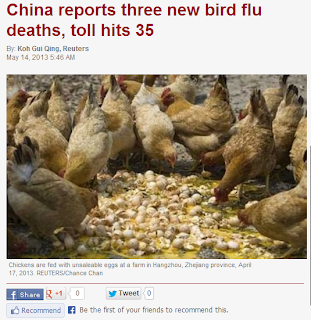 Then the news in China with 35 deaths already from a strain of H7N9 bird flu virus, out of 130 reported cases. News story here. All these three stories are from interaksyon.com.

Diseases indeed mutate. They are not dead or static, they are living and evolving micro organisms that want to expand themselves as fast as possible and claim more victims.

And that is why medical treatment, medicines and other aspects of healthcare must continue to evolve too. And some government policies that can discourage such continued innovation should be discouraged instead.

Reiner Gloor of PHAP has two articles last month on vaccines and preventive healthcare, especially in protecting children. Posting them below.
----------

PREVENTING diseases remains the most important health strategy that eliminates the burden of social and financial risks associated with curative or palliative care. Vaccination has saved about 2.5 million lives each year, making it one of the most important and cost-effective public health innovations.

The 65th World Health Assembly (WHA) acknowledged, “vaccination is, and should be recognized as, a core component of the human right to health and an individual, community and governmental responsibility.” The WHA added that as an integral part of a comprehensive package for disease prevention and control, vaccines and immunization are investment in the future of a country.

In the Philippines, President Benigno Aquino himself recognized immunization as part of his priority universal health care agenda. He said that to win the war on poverty, the country must also turn its attention to public health.

“And, as we focus on the health of our country, economy, government, the overall health of all Filipinos also remains a top priority. We want our people to be empowered individuals capable of standing on their own two feet -- strong, healthy, and skilled men and women who can take advantage of the opportunities that life affords them,” he said during the launch of the an immunization program targeting 700,000 poor children.

Introduced at the World Economic Forum in Davos, Switzerland in January 2010, the global health community made a call for a Decade of Vaccines (DoV) which vision is a world in which all individuals enjoy lives free from vaccine-preventable diseases. The mission of the Decade of Vaccines is to extend, by 2020 and beyond, the full benefit of immunization to all people, regardless of where they are born, who they are, or where they live.

The Bill & Melinda Gates Foundation pledged $10 billion for the research, development and delivery of vaccines for the world’s poorest countries. The Foundation projected that about 7.6 million children under five will be saved from life-threatening diseases by increasing vaccines coverage in poor countries by 90%.

The World Health Organization (WHO), the United Nations Children’s Fund (UNICEF), the National Institute of Allergy and Infectious Diseases (NIAID) and the Bill & Melinda Gates Foundation launched the DoV through collaboration to create a Global Vaccine Action Plan (GVAP) in consultation with stakeholders including the research biopharmaceutical industry.

During the decade, one of the goals is to achieve commitments to eliminate and eradicate poliomyelitis, measles, rubella and neonatal tetanus at the global or regional level. The GVAP emphasized that attaining the goal within the decade is critical as success will encourage the realization of further goals.

Apart from saving millions of lives, realization of immunization-specific goals will result in economic productivity gains and at the same time, contribute to exceeding the Millennium Development Goal 4 to reduce child mortality by two thirds.

It is estimated that about 26 million future deaths could be prevented if the coverage targets for introduction and/or sustained use of 10 vaccines are met in 94 countries within the decade. The said estimate is for the 10 vaccine preventable diseases: hepatitis B, Haemophilus influenzae type b, human papilloma virus (HPV), Japanese encephalitis, measles, meningococcus A, pneumococcus, rotavirus, rubella and yellow fever.

A peer-reviewed paper “Delivering the Promise of the Decade of Vaccines: opportunities and challenges in the development of high quality new vaccines” newly published in Vaccine, noted that “sustained access to and use of high quality and innovative vaccines are required for making the DoV a reality.” The paper said that research pharmaceutical companies contribute to DoV objectives through their R&D and access programs.

Penned by vaccines experts with support from the International Federation of Pharmaceutical manufacturers & Associations (IFPMA) and the Biotechnology Industry Organization (BIO), the paper said that a major area in which the research pharmaceutical industry contributes to the DoV vision is through their pipelines of innovative vaccines. IFPMA said that vaccine development has accelerated due to scientific breakthroughs in biotechnology, genetic decoding, and information technology. Such has resulted in a broad range of new vaccines targeting 25 infectious disease categories that disproportionately affect the vulnerable.

One of the recently introduced vaccines targets HPV, a major cause of cervical cancer which is responsible for 260,000 deaths worldwide and affects 500,000 women each year, 80% of whom are in the developing world. Another new vaccine seeks to prevent meningococcal infection which can lead to meningitis and has the potential to cause both endemic disease and outbreaks.

Research has also yielded a vaccine for pneumococcal diseases that are responsible for about 1.6 million deaths worldwide each year, many of whom are young children, particularly in the developing world. Meanwhile, another vaccine has been introduced to combat rotavirus which causes acute diarrhea and was responsible for the deaths of over 500,000 children under the age of five in 2004, the majority of whom were in the developing world.

Another recently developed vaccine was for shingles caused by varicella zoster virus. The disease is quite prevalent, with an estimated 1 million cases annually in the US alone, most commonly in those over 50 years old.


TODAY, vaccines are helping fight major life-threatening diseases that affect millions of adults, women and children worldwide. Efforts to vaccinate are saving 2.5 million lives each year, making it one of the most important and cost-effective public health innovations.

Since October 2000, the Philippines has maintained its polio-free status as part of the government goal to reduce morbidity and mortality among children by protecting them against most common vaccine preventable diseases. Polio at times causes paralysis, which is often permanent.

Under RA 10152 or An Act Providing for Mandatory Basic Immunization Services for Infants and Children, Filipino babies and children must be covered against vaccine-preventable diseases such as tuberculosis, diphtheria, tetanus and pertusis, polio, measles, mumps, rubella or German measles, hepatitis B, H. and Influenza Type B (HIB). The government provides these vaccines for free in health centers.

In 2012, the National Immunization Program has added rotavirus and pneumococcal vaccines in the list where the priority will given to infants belonging to families in the National Housing Targeting System (NHTS) for Poverty Reduction.

Over the last three decades, the commitment to vaccine development has resulted in a broad range of vaccines targeting 25 infectious disease categories including cervical cancer and pneumococcal disease.

Published in Vaccine, the peer-reviewed paper "Delivering the promise of the Decade of Vaccines: opportunities and challenges in the development of high quality new vaccines" provided recommendations to improve global access to and use of high quality, safe and effective vaccines.

Published with the support of the International Federation of Pharmaceutical Manufacturers & Associations and the Biotechnology Industry Organization, the paper gave insights on how to achieve the objectives of the global Decade of Vaccines (DoV) initiative.

Introduced in 2010, the global community made a call for a "Decade of Vaccines" which the vision of a world in which all individuals and communities enjoy lives free from vaccine-preventable diseases. The mission of DoV is to extend, by 2020 and beyond, the full benefit of immunization to all people, regardless of where they are born, who they are or where they live.

It is estimated that about 26 million future deaths could be prevented if the coverage targets for introduction and/or sustained use of 10 vaccines are met in 94 countries within the decade. Access to and use of high quality and innovative vaccines are required for making the vision a reality.

The research biopharmaceutical sector contribute to the vision through its pipelines of innovative vaccines. The paper noted that "biopharmaceutical companies continue to make significant investments to enhance the programmatic effectiveness of current products and to extend the range of available vaccines."

Out of the 374 products currently in development for neglected diseases, it was reported that about 201 (54%) are vaccines targeted at 16 specific neglected diseases or diseases that disproportionately affect the poorest countries. Examples of vaccines in development are for malaria, tuberculosis, dengue, leishmaniasis, schistosomiasis, cholera, and pneumoccocal infections.

The NTDs are a group of debilitating conditions that can cause blindness, chronic pain, severe disability, disfigurement, stigmatization or death. It is noteworthy that neglected diseases affect millions of poor people living in tropical and subtropical countries like the Philippines, further burdening patients, their families, communities and health care systems.

The biopharmaceutical industry and the various alliances contribute to improved global health through increased access, availability, affordability, and adoption of vaccines in developing and developed countries, the paper added.

Apart from research and development initiatives and collaborations, individual company programs including public-private partnerships, donations, and training programs for health care providers also enhance access to vaccines. As an example, research pharmaceutical companies are partners in the GAVI Alliance -- a public-private partnership dedicated to making needed vaccines available in the developing countries.

Despite important health advances associated with vaccine innovation, there remain barriers to equitable and sustained global access. The paper emphasized on the need to balance both access and innovation as the global community strives to address those barriers.

The paper said that the ability of the industry to maintain this positive "track record" in vaccine innovation will require seizing the opportunity that has resulted from greater knowledge of the complexities of the immune system and of powerful molecular techniques.

At the same time, it added that industry will have to demonstrate continued success in addressing the challenges affecting regulatory approval, manufacturing and financing with regards to the development of new vaccines. At present, it takes an average of eight to 18.5 years and $200 million to $900 million to develop a new vaccine.

According to the paper, accelerating vaccine access and innovation, especially in the developing world, requires a mix of "push and pull" mechanisms. Among the examples of "push" mechanisms are grants and investment tax credits. On the other hand, "pull" mechanisms can include government programs to promote vaccine uptake through increased awareness of vaccines’ health benefits. (For the full paper, visithttp://www.journals.elsevier.com/vaccine)