There is a new article from the New England Journal of Medicine (www.nejm.org) by Thomas Frieden, MD, MPH, Director of the Centers for Disease Control and Prevention, Atlanta, USA. 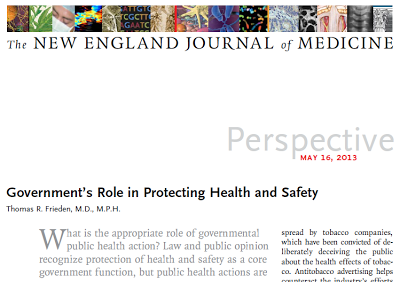 It is a good article, except that the role of government in public health is over-extended and over-rated. For instance, on top of the old or long-standing role of government, there are more, newer roles. Like new laws and prohibitions where people can smoke and where they cannot. Mandating alcohol ignition interlock devices in cars, reduction of sodium in package foods -- with penalties and fines for violations. This is expanding government agencies and bureaucracies (expanding the taxes and fees to support them, their salaries, offices, training and seminars, pension, etc.). 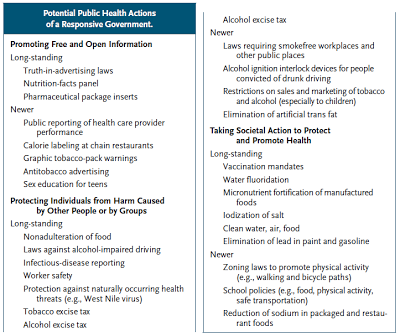 It would have been more palatable if government will hire more people to over-regulate, over-spy, over-control and over-penalize murderers, rapists, thieves, kidnappers and abductors, corrupt officials and other criminals. But to spy on restaurants because their foods are not properly labelled with ingredients, spy on people because they smoke in a restaurant or a private office, spy on car manufacturers because their cars do not have alcohol ignition interlock system, it's simply lousy and OA.

In that article, there is no mention of civil society and corporate sectors's role in promoting public health. Almost everything is government role.

In health promotion for instance, do we need government to remind people, children especially, that washing hands well before eating is necessary? That doing prohibited drugs, too much alcohol or tobacco, are not good? That cleaning houses and surrounding so that rats, cockroach, mosquitoes, other insects and pests won't stay and expand?  I don't think so, These simple health promotion knowledge are mainly personal, parental and civil society responsibility, secondarily or even not government responsibility.

The big question remains, to determine which are mainly government responsibility, and which ones are civil society and corporate responsibilities.

In discouraging high alcohol use for instance, even if the excise tax on beer, whiskey, etc. are 10x or 100x their current levels, people will still drink, They will consume products that are made by locals and neighbors, not made by corporations -- like lambanog, tuba, tapuy/rice wine, etc. Those that are "hard to tax" by the government Some people simply derive pleasure from drinking and partying, even if it means little or zero savings for them, and poor health. Government or other people cannot nanny on everyone all the time and in all places.

If government will focus on promulgating the rule of law -- the law against selling fake and substandard medicines, against dangerous or expired food and drinks, against stabbing and shooting by gangs, whether drunk or sober -- this alone will have great positive impact on improving public health.

Government should focus on controlling infectious and communicable diseases - sickness that can be passed on from one person to another even if people are extra careful and healthy about their lifestyle as those virus, bacteria, fungi, other microorganisms are more cruel and more shrewd than alcohol and tobacco molecules. This alone, too, will have great positive result in promoting public health.

In the absence of making a clear distinction between civil society responsibility with government responsibility, we can end up a socialist society soon without realizing it, where everything is run and micro-managed by the government.

META Discussion Series at the AIM in Makati last Friday, May 17, META Philippines Chairman Obet Pagdanganan challenged those who were seeking legal agenda to “act and not wait to be regulated”. And Food and Drugs Administration (FDA) Director-General, Dr. Kenneth Hartigan-Go said, “please, am asking you what you want me to do not what I cannot do”.

"Act and not wait to be regulated" is a good advice actually. All players like industry associations, professional associations, NGOs, must have their own set of self-regulation, their own system of reward and punishment. For instance, PHAP has its own Code of Ethics, there are penalties for member-companies for violating the Code. PCPI is also working on its own Code of Ethics for member-companies, these are good initiatives. And PMA, PPhA, I think they have their own code of ethics or by-laws to avoid certain "conflict of interest".

That is the essence of civil society. Self regulation, act like mature and civilized people, there are consequences to our action and inaction. Very often we do not need government to tell and regulate us what acts are good and which ones are not good. Like we do not need government to tell us that over-eating, over-drinking, over-smoking, are not good for our body. Irresponsible people should suffer the consequences of abusing their own body, they should not blame somebody else nor ask that the rest of society should bail them out from their messy and costly healthcare. But there are overall or over-arching government laws that must be implemented -- the laws against stealing, killing, abduction, land grabbing, physical harm, corruption in government, and other criminal acts.

"What you want me to do and not what I cannot do." That is another good advice and request from a government regulator. When Doc KHG was newly appointed at the FDA, we have a few emails and I suggested to him that FDA should invest in having a strong legal team. That the best regulatory work that FDA can do is to prosecute and penalize those who violate existing laws -- like those selling fake and substandard medicines, those that sell adulterated, expired, harmful food and drinks. FDA will not do store by store inspections everyday, 7 days a week, for it is simply impossible to do that. But if FDA can send violators to jails and announce the list of those violators, that alone will sow fear in the hearts and minds of potential violators. Self-regulation, to stand and be fully accountable for the quality of their products and services, will be their main protection against FDA's legal team.

Promulgation of the rule of law, of few laws that apply to all, no one is exempted and no one can grant exemption, is the single most important function of government. Welfarism and endless subsidies are a secondary or tertiary function of government. Of what use to the poor is welfarism, that they get free education, free hospitalization, free medicines, etc. but their houses can also be easily ransacked, or their piece of land can be stolen and re-titled by some shrewd lawyers or real estate developers or politicians? Or their kids can also be freely abducted and raped or murdered by some gangs and politically influential people?

The food sector, clothing and other sectors, are good "models" for the health sector. There is not a single government restaurant or carinderia, not a single government supermarket or talipapa, all are provided by private enterprises, and people are eating. "Universal food" is generally assured. Likewise there are no government clothing and shoes corporation, and yet people have clothes and pants on their body, have shoes or slippers on their feet.

Whereas in healthcare, there are tens of thousands of government barangay health centers, dozens of government hospitals, thousands of DOH-sponsored botikas or barangay drugstores, there is drug price control policy, mandatory drug discounts for senior citizens, a government health insurance monopoly, and so on, and health problems are expanding, not declining.

Which means that for many social concerns, government should step back, and allow civil society and self-regulation to take over. And addressing the NCDs via self-regulation by individuals themselves, via competition by many private healthcare providers, is one aspect that government should step back. Addressing infectious diseases for adults, and children's diseases, communicable or non-communicable alike, is one big challenge for the government already that will require huge resources.