Yesterday, I attended the Ateneo Eagle Watch briefing, held at the Ateneo Rockwell campus in Makati. The three speakers were Dr. Joseph Lim, "The State of the Economy: What were said and not said in the SONA"; Dr. Alvin Ang, "Economic Forecasts: 2015 Updates and Outlook", and Maritess Danguilan-Vitug of Rappler, "Scenarios for 2016." Dr. Lim and Alvin are professors at the Ateneo Economics Department, both are my friends too.

Among the slides presented by Dr. Lim. 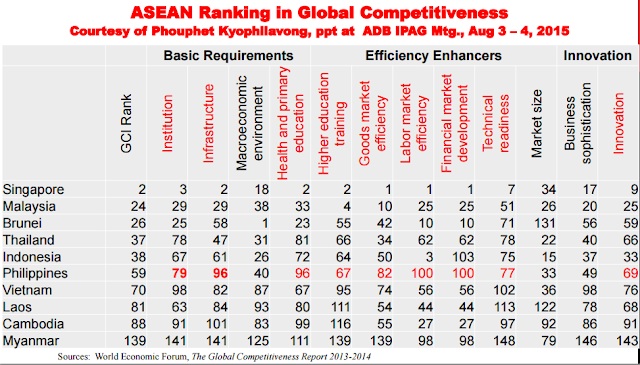 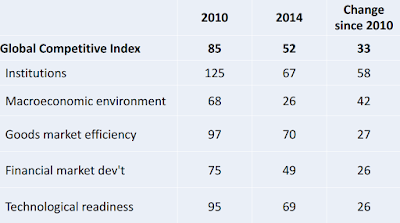 He borrowed some of the presentations made at ADB just two days earlier, during its IPAG meeting. From the above table, a summary of PH situation in the WEF's Global Competitiveness Index (GCI) annual reports.
In terms of economic resilience -- from world fiscal and financial shocks. Slide he borrowed from BSP Deputy Governor Diwa Guinigundo. 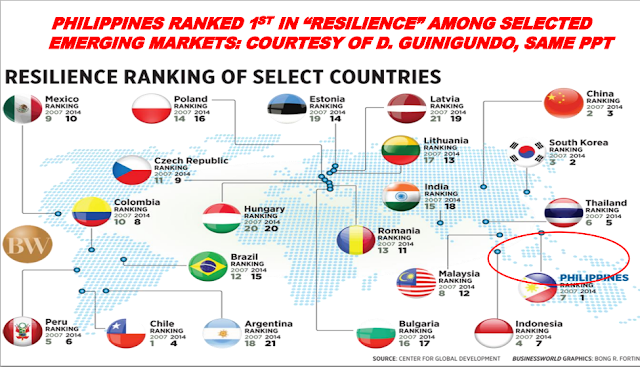 Dr. Lim argued that while PH poverty incidence has been declining, in 2014 it rose. This was not mentioned by the President in his last State of the Nation Address (SONA). 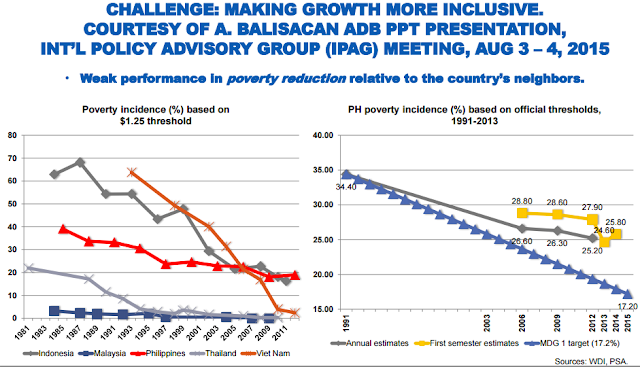 This is from Alvin's presentation. Beautiful charts.  EU and Japan growth are wobbly and sometimes bordering on recession; US barely growing, but our OFW remittances still rising (though not as fast as before). Growth in the rest of Asia, Middle East keep the high demand for Filipino labor. 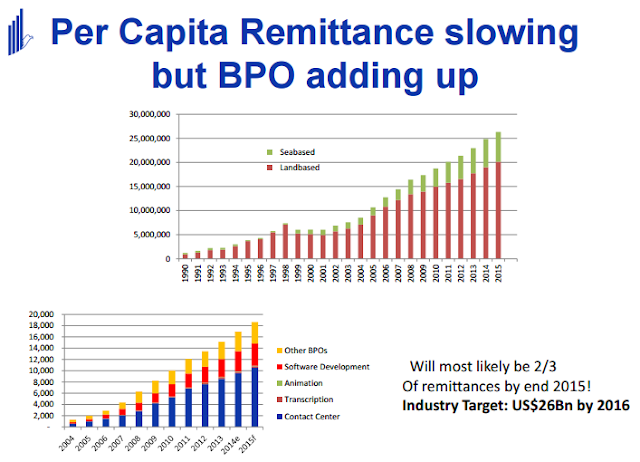 The US seems able to sustain a 2 percent average growth. The huge dip in 2008-2009 economic contraction is very visible. 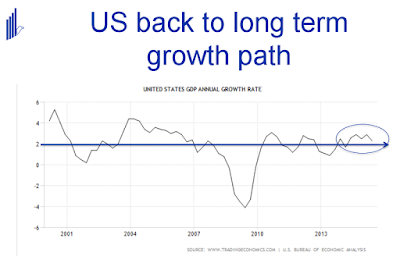 Summary of the Ateneo Econ's forecast for the rest of 2015. These are realistic numbers, Alvin, good. At 1-1.5% annual interest rate of government borrowings (Treasury-bill rates), these are low, compared to the previous 7-10% a decade or so ago. Many people are still angry at these figures, they just complain and complain. 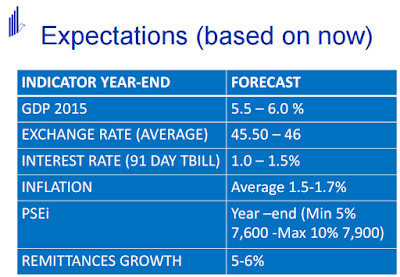 Dr. Lim was left-leaning before while he was still teaching at UP. Until now somehow :-). So during the open forum, I commented and argued that more than "good governance", perhaps we should be asking for "less governance" because as some of his slides showed, growth was faster in sectors and sub-sectors where there are no huge departments overseeing, like the ICT, whereas in agri where we have DA, DAR, NFA, etc., growth was slower. And even socialist Vietnam is cutting personal income tax to around 20 percent next year, PH remains to have the highest personal  income tax at 32%. Vietnam also abolished restrictions to foreign investments, up to 100% foreign ownership is allowed, except in a few sectors like banking. 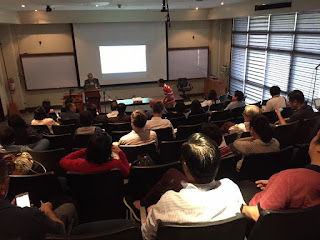 He replied that me being a UPSE alumni, goes with the sentiment of many faculty members there of advocating the less government philosophy which is dangerous. Do I want no government irrigation projects, farm subsidies, etc.? The case of Japan, S. Korea industrialization were government-led.

Limited time for Q&A as usual, I did not make a follow up comment on the floor as there were other hands raised to ask questions, make comments. Of course I do not advocate zero governance.sic subsidies like agri infra (rural roads, irrigation, electrification, etc.) should continue but NFA subsidies (buy high and sell low, rice trade protectionism, etc.), endless, no time table forced land redistribution and DAR itself should discontinue.

Growth is a necessary but not sufficient condition for poverty alleviation. Despite what other people who  only complain and  complain, we should aspire for faster growth. And more investments, local and foreign. It leads to more job creation, more poverty alleviation.