* This is my article yesterday in BusinessWorld Weekender.
--------- 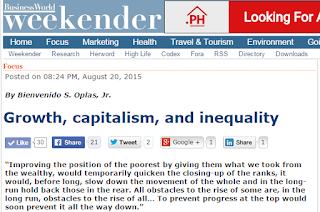 “Improving the position of the poorest by giving them what we took from the wealthy, would temporarily quicken the closing-up of the ranks, it would, before long, slow down the movement of the whole and in the long-run hold back those in the rear. All obstacles to the rise of some are, in the long run, obstacles to the rise of all… To prevent progress at the top would soon prevent it all the way down.”
-- Friedrich Hayek, The Constitution of Liberty (1960), Chap. 3, “The Common Sense of Progress”

Many people have mixed feelings and attitude towards economic freedom and inequality. They want to be freed from too many regulations, prohibitions and  taxes that tend to stifle individual creativity and entrepreneurship, yet they also want more regulations to  control inequality that result from more individual freedom.

A forum on “Poverty, Inequality and Inclusive Growth” was held last August 12, 2015 by the Albert Del Rosario (ADR) Institute at the Tower Club in Makati. It was convened by Dr. Epictetus Patalinghug, a Professor at the UP College of Business Administration. He also gave a lecture and discussed five topics, (1) macroeconomic policy and poverty alleviation, (2) poverty-growth linkage, (3) inequality in the past and present, (4) employment impact of growth, and (5) how growth can be more inclusive.

The three reactors were Dr. Vic Paqueo of the Philippine Institute for Development Studies (PIDS), Mr. Ferdie Diaz of the Employers Confederation of the Philippines (ECOP) Co-Chair on TWG on Labor and Social Policy Issues, and yours truly as head of Minimal Government Thinkers.

I argued the “politically incorrect” position that inequality is necessary and overall, is good for human progress. Consider for instance how previously heavily-repressed people in the ASEAN – Cambodia, Laos, Myanmar, Vietnam (CLMVV) – have managed to improve their average per capita income over the past two decades. They experienced a doubling (2x) of per capita GDP in just one decade, from 2004-2014.

As other people’s income expand very fast, their income gap with their poorer countrymen also expands. 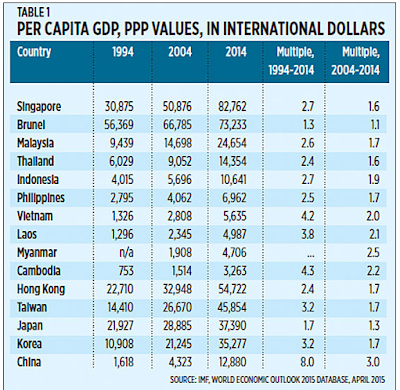 Is rising inequality a bigger problem than rising income for people in Asia? From a global survey conducted by PEW Research Center in the US in April to May 2014, the answer is No.

The PEW survey was based on telephone and face-to-face interviews conducted under the direction of Princeton Survey Research Associates International. The average sample size per country was 1,000 adults, 18 years old  and above.

One question was, "Are people better off in a free-market economy given the wide disparities in wealth that might result?" Agree or Disagree (See Table 2).

Respondents in socialist Vietnam and China have high support for free market capitalism despite the rise in inequality, than people who are against it. High support also of people in Malaysia and the Philippines.

Overall result covering 44 countries, majority of the people around the world were willing to accept inequality to have a free market system. About two-third (2/3) of the survey respondents said they are better off under capitalism despite the inequality.

Another interesting question in the PEW survey was, “What would do more to reduce the gap between the rich and the poor in our country?” 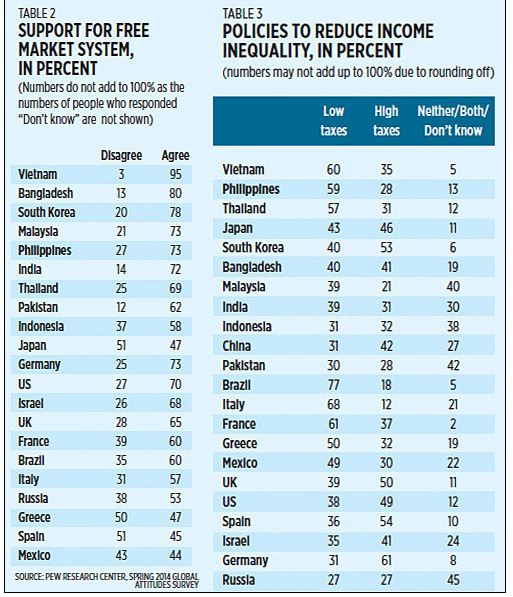 Majority of respondents in Asia, especially in Vietnam, Philippines and Thailand, favored low taxes, not high taxes, to reduce inequality. Meaning they are driven less by envy (“tax the rich more”) but by a desire to become rich and middle class themselves, and they do not want high taxes to negate whatever expansion in income that they will attain in the future. Low taxes on corporations also encourage more investments, more jobs for the poor, and economic growth.

Perhaps the best indicator that the world, the people in the planet today are better off compared to their ancestors despite rising wealth inequality, is the rising life expectancy. Even the super-rich more than a century would be lucky if they live up to 60 years old as average life expectancy in the world at the start of the 19th century was only 48 years old. Now, even the poor can expect to live up to 80+, 90+ years.

Infant mortality is declining too, even children from poor families are dying less than before.

To summarize the points in this paper,

1. Equal people are not free and free people are not equal.  Income and wealth inequality per se is not the problem, high poverty is. To force equality among the people, massive political repression will happen.

3. Inequality due to individual freedom will lead to innovation and substantial poverty alleviation. In the words of Friedrich Hayek again in his book, The Constitution of Liberty,

“The rapid economic advance that we have come to expect seems in a large measure to be the result of this inequality and to be impossible without it. Progress at such a fast rate cannot proceed on a uniform front but must take place in echelon fashion, with some far ahead of the rest…. The over-all speed of advance will be increased by those who move fastest. Even if many fall behind at first, the cumulative effect of the preparation of the path will, before long, sufficiently facilitate their advance that they will be able to keep their place in the march.”

4.  Income taxes, personal and corporate, should go down drastically. Efficiency and hard work is not a crime to be penalized by high taxes. And if government should create new welfare programs, it should abolish or shrink old programs that do not work.