Below are my random thoughts about the  ongoing occupation of EDSA -- the busiest road in the Philippines -- by members of the Iglesia ni Cristo (INC) religious grooup.
--------

Government, go back to your main function -- enforce the rule of law, end mob rule and rule of men. Stay out from too much welfarism.

Government is often too busy with endless welfarism and populism, placating the irresponsible and opportunist sectors of society, that it becomes less efficient, there is government failure, in quick justice administration, protecting private property, protecting lives from bullies, kidnappers and murderers.

If these hypocrites, them and other aspirants of "people power in Edsa" think it is their "right" to self-expression and "freedom of assembly", then other people also have freedom of movement to use that very busy road. The right of the latter is more important than the purported right of the former. 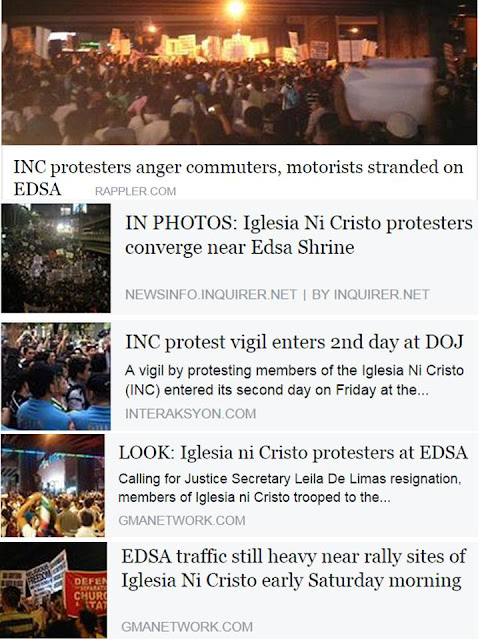 Many people have warped and corrupt thinking that they can politicize everything. There are many concerns where the proper forum are the courts, not the streets, and much less EDSA. And it is government role to convince the public that justice administration is credible and fast, not biased and slow.

If there is government failure in its most basic function, enforce the rule of law, then expect government failure in its non-basic function, like endless welfarism. A poor household may get free education, free PhilHealth coverage, free housing, etc. but if their small savings like cows, a tricycle can be easily stolen, their kids can be easily abducted and raped, there is breakdown in rule of law and protection of private property, what are the uses of those welfarism?

On another note, with this Iglesia/INC hypocrisy and mob rule, Leila de Lima will gain fast in the Senatorial surveys.

And any Presidential candidate who can boldly state that if they win, they will tax the church, Catholic or Iglesia or other religious groups, will likely get voters support. Since almost all church groups meddle in politics, they might as well be meddled in their income and properties. Then income taxes can go down significantly, Raise the tax base, not the tax rates.

Many people have deep suspicion of that church, being despotic and arrogant. Now these suspicions are publicly confirmed. The longer they stay in Edsa, the more that they alienate themselves from the rest of PH society.

Iglesia is being divided slowly, by themselves. Some have been illegally imprisoned, kicked out, some have quit the church, and those who don't believe in their street demos in Taft and now Edsa. Iglesia personalities like Anthony Taberna of ABS-CBN and his camp will most likely go against these militants.


A crime is committed, the victim files a complaint, the complaint is investigated, the offender is charged. This is the simple math of crime and punishment in any society and under whatever government. It is part of the social contract citizens have entered into with the State, that in order to establish the rule of law, instead of vigilante justice or the rule of the mob, the people give the mandate of exacting justice to the State under a constitutional regime. The alternative is the law of the jungle.

No individual living within the territory and jurisdiction of the sovereign State endowed by its people with the mandate of enforcing the rule of law is exempt from this paradigm. People may belong to other smaller collectives, including religious organizations, but this does not exempt them from being subject to the larger collective of the State. Philippine citizens may be Roman Catholic, Muslim, Protestant, Iglesia ni Cristo, atheists, Rotary, Boy Scout or Girl Scout, fraternity or country club members, Liberal, Nacionalista or UNA, but they are first and foremost Philippine citizens living in its territory under Philippine laws. No one, by virtue of mere affiliation to these smaller collectives, is above the law. Membership in these organizations does not give anyone a free pass from investigation and prosecution if a crime is committed.

This is the basic principle behind the rule of law under one sovereign established by the people through government. No one can be Iglesia Ni Cristo or Roman Catholic first and Filipino citizen second. We are all citizens first, everything else is secondary. This is the real meaning of the separation of church and State. No church or religious organization should confuse itself as being endowed with the powers of the State. No church or religious organization should bear the illusion that it is higher than the sovereign, and that it can impose itself on others, least of all the State, by its sheer strength in numbers. No church or religious organization can ever play with the notion that it is a State and a government in itself, its members or officials exempt from the laws of the State, and entitled to their own system of justice within their ranks.

This is what separation of church and State is. The opposite is the establishment of religion, which is proscribed by the Constitution. When the State relents and looks the other way so that members of religious organizations can settle alleged criminal acts among themselves and within their ranks, within the walls of their temples, according to whatever ersatz system of crime and punishment, it gives an unwarranted concession to these organizations at the cost of performing its sovereign mandate and the rule of law. If the State will willingly surrender a sovereign function and constitutional mandate to any religious organization, it is not doing so in accordance with the separation of church and State, it is doing so in violation of the principle of non-establishment of a religion.

The Department of Justice cannot give any exemption or special treatment to any individual or group, including religious organizations, their officials or members. It can only apply the law and perform its mandate equally and impartially, without regard to power and influence and strength in numbers. When it investigates the allegations of kidnapping against officials of the INC, it cannot buckle to the pressure of a few thousand, or even millions, of devotees massed at its gates, and supplant the rule of law with the rule of the mob.

If the INC officials and members complained of by Isaias Samson and other INC ministers are innocent, they should face the complaints like any ordinary Filipino is required to by law, instead of calling out their flock under misleading premises set to obfuscate the issues more than clear up the allegations of kidnapping. The veracity of the complaints is yet to be determined in a preliminary investigation. We should all follow the procedure, complainants and respondents alike, and allow justice to take its due course, instead of pre-empting and pre-judging its resolution.


The DOJ and the government cannot allow every Juan, Jose and Pedro, every religious sect or private organization, to have its own system of justice. This is not separation of church and State. Neither is it freedom of religion. This is vigilantism pure and simple, seditious and anarchic.
-----------