* This is my article yesterday in BusinessWorld Weekender.
-------- 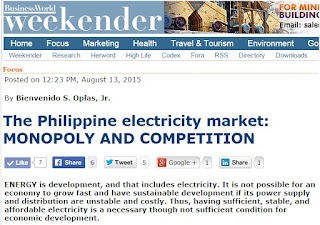 The Philippine electricity market: MONOPOLY AND COMPETITION
ENERGY is development, and that includes electricity. It is not possible for an economy to grow fast and have sustainable development if its power supply and distribution are unstable and costly. Thus, having sufficient, stable, and affordable electricity is a necessary though not sufficient condition for economic development.

The Philippines remains to have among the most expensive electricity prices in Asia. Here are data with some breakdown also shown, including the cost of power generation, cost of grid/transmission, and value added tax (VAT) or gross sales tax (GST). Of the 14 major cities in North and Southeast Asia plus Australia and New Zealand listed below, Manila has the 3rd most expensive electricity prices -- 3rd in overall residential tariff, 3rd in generation cost, 3rd in grid charges, and 3rd in tax rates. 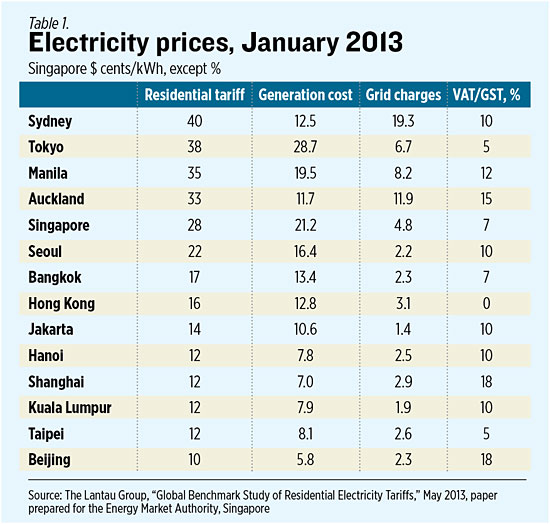 Some reasons why other Asian cities and countries have lower electricity prices than the Philippines are as follows:

One, their government subsidizes electricity while the Philippine government imposes multiple taxes, royalties, and fees on power. The VAT rates are shown above, and royalties alone for Malampaya natural gas are as high as P1.45/kWh, and this is ultimately passed on to the consumers.

Two, Philippines power generation capacity is low, with total primary energy supply (TPES) in 2012 for instance only 0.44 tons of oil equivalent (toe) per person per year. Indonesia has twice, Thailand has four times, Malaysia has six times, and Singapore has 11 times that amount. 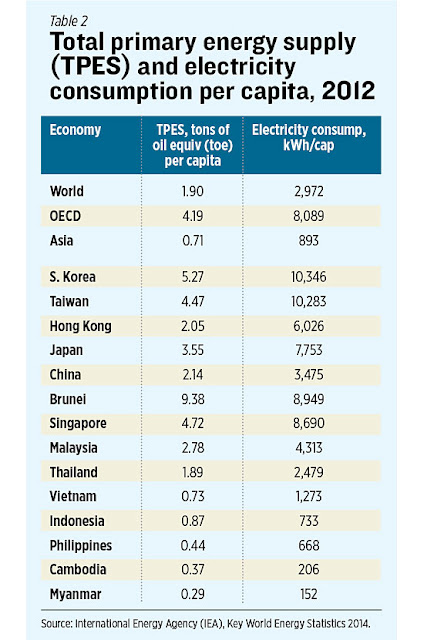 So with these two factors -- high electricity prices and low power gen. -- average electricity consumption is also low, only 668 kWh per person per year in 2012.

SUSPICIONS
The Philippine power and electricity sector is characterized by a mixture of competition and monopolies. Power generation is generally competitive with many generation companies (gencos) slugging at each other. Power transmission is a national monopoly via the National Gird Corporation of the Philippines (NGCP). And electricity distribution is reserved to geographical monopolies, mainly the 120 electric cooperatives (ECs) nationwide, the biggest of which, Manila Electric Company (Meralco), accounts for about 75 percent of total electricity sales in Luzon and about 55 percent nationwide.

The issue of high electricity prices in the country has resurfaced once again but in a different angle. In current practices, the various ECs and distribution utilities (DUs) have bilateral contracts with different gencos, and such bilateral arrangement is sometimes suspected of being “sweetheart deals,” wherein both the gencos and DUs benefit to the disadvantage of the consumers.

To address this concern, the Department of Energy (DoE), on the watch of then secretary Carlos Jericho L. Petilla, issued Circular No. DC2015-06-0008, “Mandating All Distribution Utilities to Undergo Competitive Selection Process (CSP) in Securing Power Supply Agreements (PSA).” The order was dated June 11, 2015, or about two weeks before Mr. Petilla’s resignation.

The general principles behind this circular are to (a) increase transparency in the procurement process, (b) promote and instill competition in the procurement and supply of electric power to end-users, (c) ascertain least-cost outcomes, and (d) protect public interest.

Entities that will be covered are ECs, private investment-owned distribution utilities (PIOUs), multipurpose cooperatives, entities within economic zones, and other authorized entities engaged in the distribution of electricity.

Aside from suspicions of “sweetheart deals,” some DUs and ECs have their own gencos. Cross-ownership of DUs and gencos is allowed in the Electric Power Industry Reform Act (EPIRA) of 2001. Two examples here.

One is Meralco, whose wholly owned subsidiary, Meralco PowerGen Corp. (MGen), is targeting a portfolio of 3,000 MW by 2020. MGen is planning or constructing two other big power plants, the 1,200-MW Atimonan, Quezon, coal plant, and the 500-MW San Buenaventura, Quezon, coal plant, both slated for 2018. Another consortium, the Redondo Peninsula Energy, Inc., is slated to open its $1.2-billion, 600-MW coal power plant in Subic in 2018.

TAXES, MONOPOLIES
By forcing the ECs and DUs to undergo competitive bidding for their power supply contracts, the DOE hopes to break or minimize the practice, or at least minimize suspicions, of price-rigging.

This is definitely a welcome move for independent power producers (IPPs) which have little or no cross-ownership and control with ECs and DUs. They will have a fairer and level playing field in getting supply contracts. But while the goal is laudable, the circular will be unable to address other problems and contributors to expensive electricity in the country. Among these are the following.

1. High and multiple taxes, royalties, and fees imposed on natural gas and other energy sources and on electricity generation/transmission/distribution businesses.

2. Expensive electricity is also being imposed recently by RA 9513 or the Renewable Energy (RE) Act of 2008, wherein wind, solar and biomass are given guaranteed prices via feed in tariff (FIT) for 20 years.

3. Monopoly characteristic of ECs and DUs because electricity distribution is considered a “public utility” and, hence, protected by the Constitution and franchise laws. Abuse of power is a possibility that is always second nature to any monopolist. This will require amending the Constitution.

A compromise will have to be made, like having a transition period to allow the maturity of existing power supply contracts.

The long-term measures to address structural problems that lead to expensive electricity is to limit government intervention, to step back. Like amending the tax code to reduce or abolish certain taxes on energy, amending the RE law to abolish the FIT provision, and amending the Constitution to remove economic protectionism.