BWorld 14, OFWs, MERS-CoV and the DFA

* This is my article yesterday in BusinessWorld Weekender.
--------- 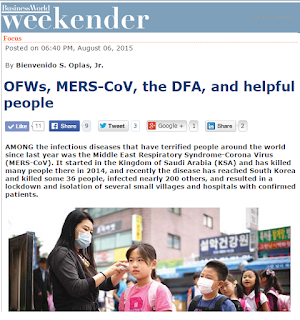 AMONG the infectious diseases that have terrified people around the world since last year was the Middle East Respiratory Syndrome-Corona Virus (MERS-CoV). It started in the Kingdom of Saudi Arabia (KSA) and has killed many people there in 2014, and recently the disease has reached South Korea and killed some 36 people, infected nearly 200 others, and resulted in a lockdown and isolation of several small villages and hospitals with confirmed patients.
Among the people who succumbed to the MERS-CoV infection and died were Filipino health workers like nurses in frontline emergency cases in Saudi hospitals.

One of those Filipino nurses who died was my sister-in-law, Gemma B. Oplas, wife of my younger brother, Bonifacio S. Oplas. Gemma was working as a nurse at the emergency department of the Saudi government-owned hospital, King Fahad Medical Center (KFMC), in Riyadh. She was taking care of some MERS patients in the hospital until she herself was infected. Death was fast, only six and a half days from the time she was confined in the same hospital where she was working, until her death on May 6 last year.

Several issues came out of her case, implying several lessons that other health OFWs may take note.

1 Non-transparency by the hospital. Initially, KFMC imposed a news blackout sometime April-May 2014. No one knew the extent of infections and deaths in the hospital alone. The Philippine Embassy did not even know some of these things until they learned from the Department of Foreign Affairs in Manila when my brother applied for a rush passport. The information blackout by the hospital showed he severity of the problem, similar to the Chinese government’s news blackout when SARS spread and killed several people.

2 The DFA’s assistance. The Consular Office acted swiftly when my brother requested for a rush passport so he could fly to Riyadh and see his wife. But death was fast, he did not fly anymore, knowing that the DOH Quarantine would hold and isolate him for at least two weeks, the normal incubation period of MERS, when he returned.

3 Three months’ body freezing. Since it was death from a highly infectious disease, the body would be put in a freezer for 2-3 months before it can be transported back home. My brother would have preferred cremation and bringing home the ashes, but cremation is not allowed in KSA.

4 Airline paranoia. Around mid-August 2014, KFMC and the Saudi Ministry of Health decided it was safe to send home Gemma’s body via Cathay Pacific cargo (Riyadh-HK-Manila route). Gemma’s body was supposed to arrive in Manila on August 17, before being transported to Bacolod City. A belated correspondence from Cathay Pacific the day before transporting the body said the Hong Kong government and the airline would require an “import permit.”

Import permit for the dead? Cathay said this permit should come from the Department of Health, to ascertain the safety in bringing home the body of a person who died of an infectious disease. I went to the department’s Bureau of Quarantine (BoQ), talked to the director who said that it is not their duty or responsibility to give a permit for incoming deceased people. They can give permit for outgoing deceased bodies.

I wrote to a Cathay officer and asked what exactly is the “import permit” that they require and from what agency it should come from. They replied,

“...If not cremated, death Certificate + Undertakers Certificate. If death caused by communicable disease, admittance allowed only when the remains is [sic] cremated or properly embalmed and enclosed in hermetically sealed coffin.”

So their earlier requirement of an “import permit” was irrelevant as the HK government wanted a different set of requirements.

5 Quick burial, avoid further health stigma. Saudia Air transported Gemma’s body, Riyadh-Manila direct last September 04, 2014, or almost four months after she died. Then PAL cargo brought the body to Bacolod that same day. The plane landed around 6pm, the coffin was brought to a cemetery in Bacolod, short mass, the coffin was not opened, no public viewing, then buried around 8pm.

6 Getting the benefit package, a long process. Around July or August 2014, KFMC deposited the hospital’s benefit package for Gemma, equivalent to three years’ salary, plus end of service award, to Al Rajhi Bank in Riyadh.

At first, my brother sent a special power of attorney (SPA) to Gemma’s close friend, fellow hospital co-worker Magda, who would then transfer the amount to the joint account of my brother and their only child, Lois, in Bacolod City. The SPA went through various official routes -- DFA, notary public, the Kingdom of Saudi Arabia (KSA) embassy in Manila, then mailed to Riyadh.

After several weeks, the feedback was that the Saudi bank said they would not honor that SPA, because according to KSA customs, recipients of Gemma’s benefit package should not only be the legal and married family of Gemma but also her original family, meaning signatories should include her parents and siblings.

Sensing that even this may create new questions from the Riyadh bank and other Saudi government agencies, the Philippine embassy offered to be the recipient of the SPA, so in case of any problems, this would be handled as a government-to-government matter.

7 Al Rajhi Bank’s delaying moves. After submitting all the new requirements to the bank, the Philippine embassy wrote and called up the bank several times to get the benefit package. But the bank did not respond to their letters or take their phone calls. And when a staff member of the embassy visited the bank, the bank manager would not even entertain him.

The bank’s website says it cares for its customers and gives them instant personal finance, without the customers even having to wait for 15 minutes. So why would the benefit package for a dead person be pending for many months?

There is not a single email address of any of the bank’s officers. I blogged about the bank and also tweeted them, and still no reply.

8 Secretary Albert F. del Rosario’s office acted. First, I wrote to Ambassador Ezzedin H. Tago in Riyadh to do something about this case, but got no reply. Then I wrote to DFA Undersecretary Jesus I. Yabes of Migrant Workers’ Affairs, and no reply too. My brother emailed the DFA Secretary, then I followed up with some friends at the department. The Office of the Secretary acted swiftly. They sent a formal reply to my brother, saying they had instructed the Philippine embassy in Riyadh to speed up this case.

Within a week or two, the embassy texted my brother saying they had the check, since the bank had finally released the package, which was then sent to the DFA’s main office. After more than three weeks, going through regular processes, the DFA finally deposited the fund in the joint account of my brother and his daughter.

Problem no. 1, getting the body back home to Negros Occidental, was finally solved after almost four months.

Problem no. 2, having the benefit package delivered to the family of the deceased, happened after almost 15 months. The main cause of the delay was the bank in Riyadh.

My brother and I would like to thank the DFA for being a helpful agency in this case. From rushing his passport (via Consular Office) to assisting in the body’s return (via the department’s Office on Migrant Workers’ Affairs) to getting the benefit package (via the Philippine embassy in Riyadh and the Office of the Secretary). People who at once criticize the DFA for its supposed “inaction” on their requests may need to observe restraint and learn the formal processes whenever possible.

Finally, there are helpful people around. I met this man, Croox, in June last year, who has already retired from the DFA. Receiving his monthly pension but not doing much at home, he would frequently return to his previous office and help people anyway he can. For free. A jolly and cheerful guy, he helped us secure certain government documents, including a notarized copy by the Saudi Embassy, for the SPA. Croox would spend his own money to go to the DFA and the Saudi embassy to follow up papers.
----------


Relax! - Expect no infections at all around the world once and for all - I got the power (and everybody can possess it) to destroy the MERS-CoV instantly, to curb the Saudi Arabian and the global pandemics and to erase any diseases from the face of the Earth in a matter of days - Any threat worldwide will be completely avoided, once everybody (kids and adults) start doing my discovery (the greatest one of all time on Earth and maybe in the Universe) - The WVCD - The Weapon of Virus and Cancer Destruction - By far more powerful than the human immune system, keeping it intact all the time, for any pathogens are killed the moment they touch us - Just an exercise for a minute a day - The cure and prevention of any diseases, known on Earth for millions of years - Infections, Cancers, Diabetes, MS, Alzheimer's, Parkinson's Disease, Cardiovascular Diseases, Chronic Diseases and Strokes - Even Tibetans and Yoga don't know how to stay absolutely healthy all the time - Everybody (kids and adults) will stay absolutely healthy all the time, for the WVCD supplies every cell of our bodies with enough oxygen, that kills any pathogens the moment they touch us and prevents us from any diseases - The price of the WVCD for the whole world is 5 billion EURO - Just 25 million EURO per country - Once I am paid the money, everybody (kids and adults) will know how to stay absolutely healthy all the time - Never getting sick of any diseases even for a second.