UN Conference on Trade and Development (UNCTAD) released in late June 2015 its World Investment Report (WIR) 2015. The annex tables of that report are found here. 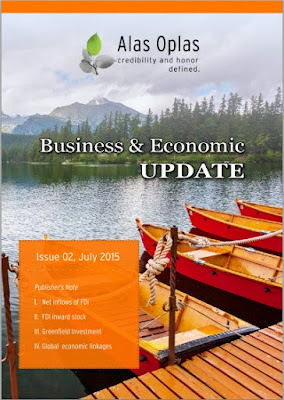 My sister's auditing firm published the 2nd issue of its monthly Business and Economic Update last month. Among the contents of that report are the tables below, original global data are taken from the WIR 2015.

Here, it shows that from 2012-2014, there was consistent net outﬂows of foreign direct investments (FDIs) in the G7 except UK and partly, Canada. Then in Hong Kong, Taiwan, S. Korea and Malaysia. 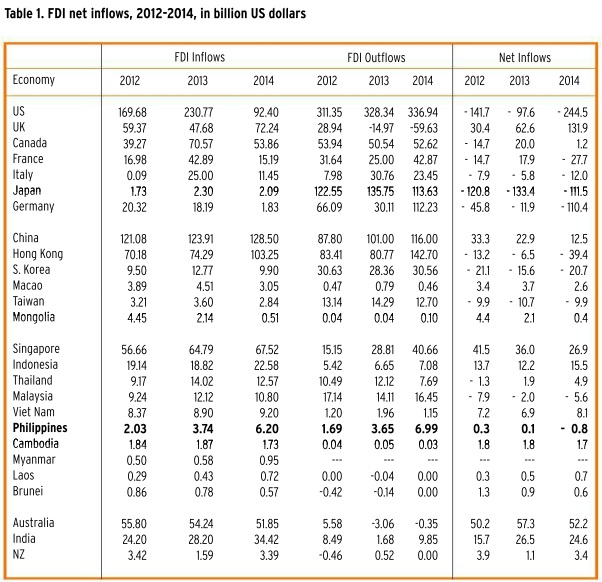 
Numbers below show the ratio of FDIs over gross fixed capital formation (GFCF) or simply domestic investments. It is interesting to see how Germany and Japan have very small share of FDIs. This somehow gives an idea of their investment protectionism policies.

The most open economies to global trade and investments, Hong Kong and Singapore, have the highest FDI share to total national investments.  And an FDI share of 2.5 to 14 percent seems to be the average, possibly a healthy mixture, including the 10.5 percent for the Philippines. 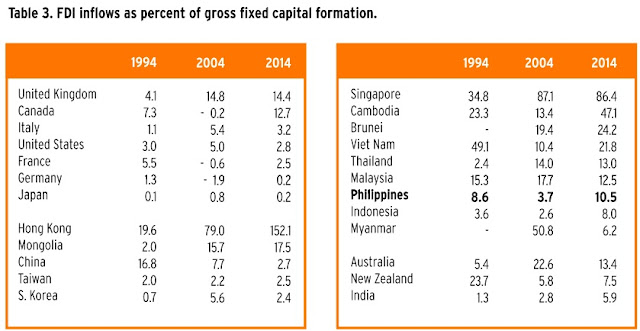 Until 2012, the bulk of FDIs in the PH came from the US, HK and Japan. By 2013 until mid-2014, capital from the US withrew, from HK declined significantly, from Japan retained, and a surge of FDIs from British Virgin Island. 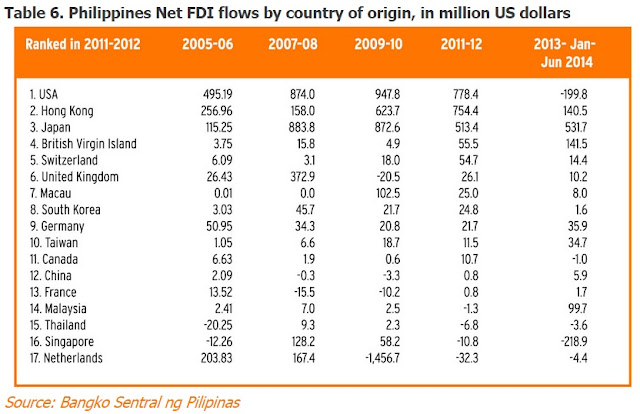 In portfolio investments like the stock markets, Japan, China, India and Hong Kong received significant inflows while many in the ASEAN experienced net outflows overall except Vietnam.

In merchandise exports (X) as a share of their GDP, Hong Kong and Singapore are run-away leaders, followed by Vietnam, Malaysia and Thailand. In non-merchandise, services exports like tourism receipts, Macao is a clear leader because of its huge gaming and casino facilities.

Personal remittances by their nationals who are working abroad, India, China and the Philippines (and Mexico) are the world leaders. The Philippines is #1 in the ASEAN. 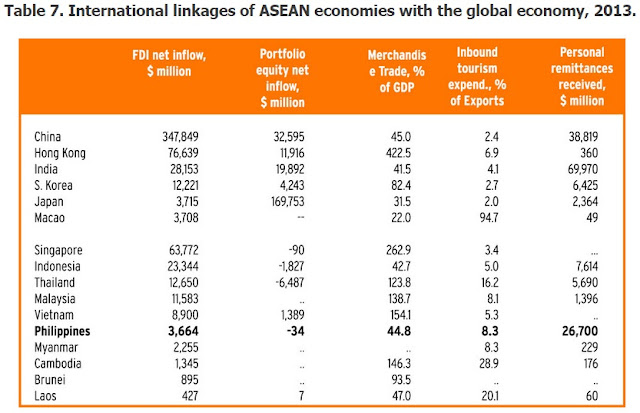 Meanwhile, from another source, these numbers are interesting. Until 2012, the US was a major source of FDIs in the ASEAN. By 2013, capital from the US declined significantly. Investments from Japan, intra-ASEAN, UK and Netherlands are big. 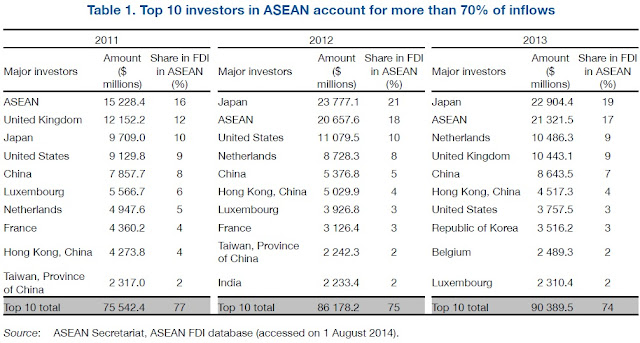 
Favorite destination of FDIs in the ASEAN are the services and manufacturing sectors. Data also from the ASEAN IR 2013-2014. 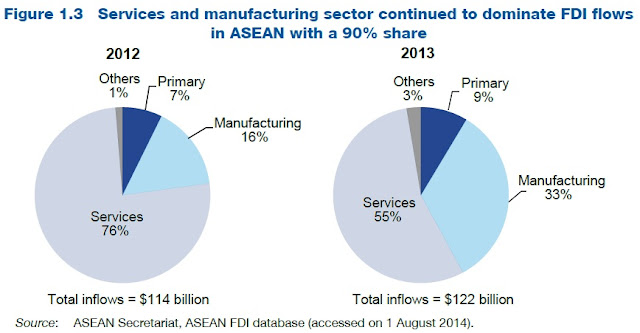 The above numbers and figures are additional reminders that the Philippines need to amend its Constitution and remove protectionist provisions that restrict or limit the entry of foreign investments in some sectors, while outrightly banning/prohibiting FDIs in other sectors.

It is not wise that government dictates that these areas are only for local investors and those areas, foreign investors can be allowed. Investments, local or foreign, automatically creates local jobs. If Filipino workers are prevented from being hired by foreign  investors here because the latter are restricted or banned on certain sectors, then many Filipino workers are hired by foreign investors in foreign lands.
-----------