The Maddison Project, data on per capita GDP and world population, 1000 to 2001. There is positive correlation. More population is an asset, not a liability. 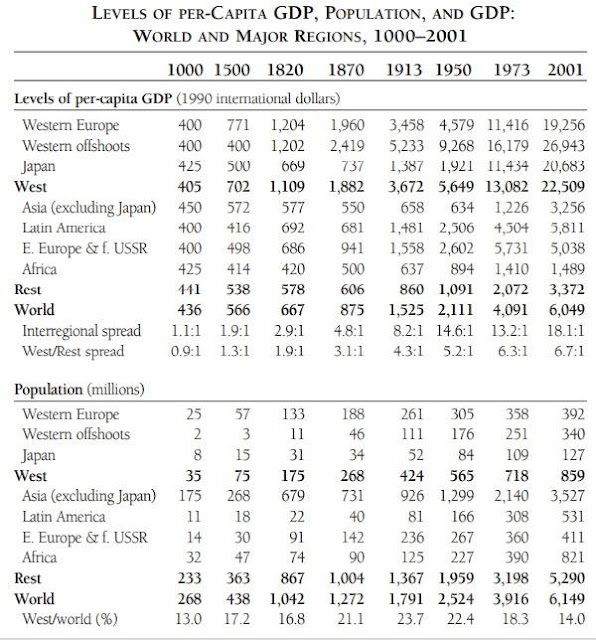 Source, Angus Maddison, 2004. "Growth and Interaction in the World Economy: The Roots of Modernity."
http://www.ggdc.net/MADDISON/other_books/Growth_and_Interaction_in_the_World_Economy.pdf

Statements like "Condition of the poor is worsening as the world modernizes" are jokes. Even the poor live longer, which means certain preventable diseases have been curtailed. Global development reaches the bottom, but not at the level that some people would wish to see. Same data source as above.

Some lessons from the Maddison data:

1. Government-sponsored population control is wrong. People are assets, not liabilities. More people means more producers and consumers; more entrepreneurs and workers. The real liabilities -- killers, thieves, abductors, etc. -- both rich and poor, private and in government, government should get them. That is the main function of government, enforce the rule of law, protect lives and private property.

The poor children, gusgusin, madumi, etc. that we saw several years ago are now the yaya/nanny of the kids, the family or office drivers of the rich and middle class, the construction workers, electricians, plumbers and security officers of residential and office condos of the rich and middle class. They are now the taxi or bus or truck drivers who move hundreds of thousands of people and tons of goods everyday.

Many of the poor want to stand on their own, rather than become mendicants to politicians and government welfare programs. They can be the sari-sari store owners, public market or ambulant vendors, barbers, etc. Since they want to stand on their own, government should not require them annual permits, from barangay to sanitary to electrical to Mayor's permit, up to BIR, DTI, SSS, etc. permits. That is not how government works. It disables many of these people to become good, micro entrepreneurs, so they become poor, and government and politicians now come to give them various subsidies so they won't become poor. Ironic no?


2. Government energy rationing and cronyism of the renewables is wrong. As human population increases and modernity continues, need for energy rises. Renewables are good for outdoors -- the Sun as the greatest light at daytime, the Wind as greatest fan day and night. Indoors, so-called "non-renewables" are a great source of stable and cheaper electricity.