One thing I appreciate about many European socialists is that they are more honest. Like Jeremy Corbyn, he's not hiding his socialism philosophy just to be popular. Not that I'm a fan of socialism. I'm for capitalism.

"Corbyn has hinted at a return to Clause IV, a Labour manifesto pledge committing the party to public ownership of industry that was scrapped by Blair in 1995...

suggesting the “Big Six” energy companies should also be taken back under state control....

significantly increasing spending on the National Health Service — rely on the potential to recoup revenue lost to avoidance and evasion and poor collection....

creating a National Investment Bank, with the power to issue bonds that would then be acquired by the Bank of England..." 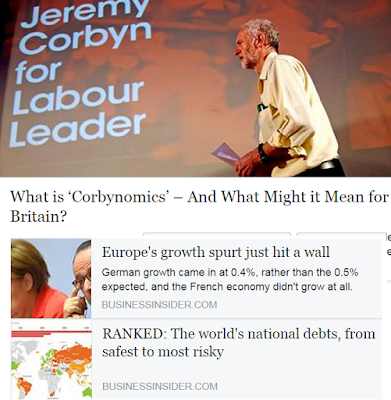 This confirms what I argued during the Ateneo Eagle Watch forum -- Europe's growth is towards flat, even contraction. Too many regulations and taxes, too many permits and government signatures, too many welfarists and eco-socialists. Europe grew and industrialized fast on a laissez faire, free market economic system. Let the most efficient, most hard-working people do their thing so long as they do not steal, kill, abduct, defraud people. Minimum regulations and prohibitions.

And the two most risky debt addict governments in the planet are ruled by socialist leadership, Venezuela and Greece.
http://www.businessinsider.com/the-riskiest-sovereign-bonds-ranked-2015-8

Meanwhile, I have met Jeremy's brother, Piers Corbyn, a solar physicist, in a conference in NYC in 2009. While Jeremy is a climate alarmist, Piers is a climate realist and skeptic of "man-made" warming/CC. While Jeremy argues that CO2 is the main driver of the planet's climate, Piers argues that the Sun, and GCRs (galactic cosmic rays) are the main drivers of our planet's climate (warming-cooling cycle).

Piers looks like Einstein, long and ugly hair, nerd-looking, has lots of Greek equations in his presentations.