Election PH 15, Who's the least welfarist?

Yesterday during the Ateneo Eagle Watch briefing, the third speaker was Rappler's Maritess Danguilan-Vitug. Her talk was about "Scenarios for 2016."

She talked mainly about the four leading candidates. I mix her 2 slides in one image here, to save space. 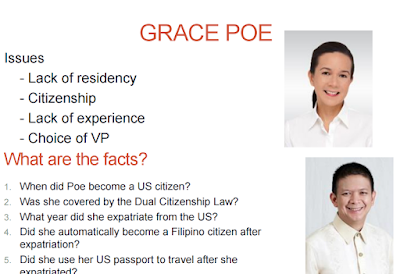 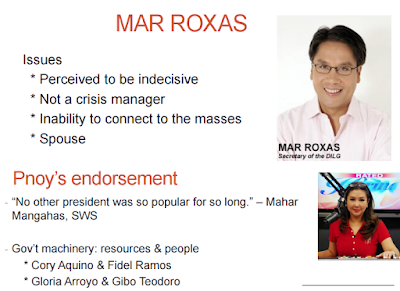 Mar Roxas used to be free market-leaning, then  he became populist as he was getting desperate in 2009 for his 2010 Presidential ambition. How he can go back to being market-friendly is a big question mark. But at least he's not involved in large-scale corruption and robbery scandals. But his wife, ahh.... no comment. 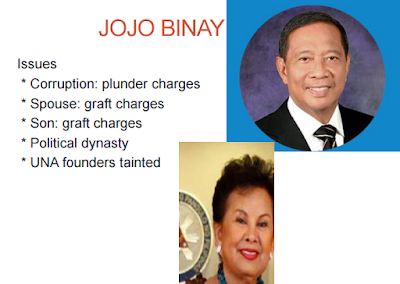 Jojo Binay, definitely corrupt, can  surpass Marcos robbery if he becomes President. From a bright, poor human rights lawyer until February 1986, he was appointed by former President Cory as OIC Mayor of Makati in  March 1986, he and his family taught that Makati City is their political kingdom forever. They got very rich, super rich, and they are not  known for any fair business acumen, just being in dirty politics. 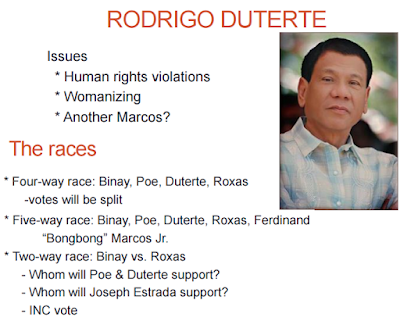 Duterte, at one time I thought that he is mentally sick because the words "Patayin", "barilin","kill", were too frequent in his mouth. I thought that  only very violent minds can say those things, repeatedly, in national media, and not feeling  sorry about it. I can understand  the impatience of many Filipinos that there are too  many rotten  eggs in government, both local and national, both civilian and armed, including the businessmen they are protecting. But resorting to  outright murders, state-sponsored murders, is not the way to address it.

Ok, who's the least welfarist, least enamored to BIG government, big and many taxes and borrowings, more regulations and  permits, of these 4 or  more Presidential candidates?