Among the big international economics/business news today is the drastic economic contraction of Russian economy, by -4.6% in 2nd quarter 2015. The economy already contracted by -2.2% in the 1st quarter of this year. This chart is from Bloomberg, August 11, 2015. 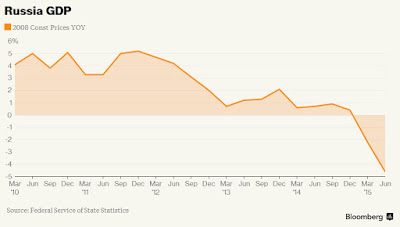 Main reasons for the huge economic contraction  -- low oil prices, economic sanctions by the West against Russia on Vladimir Putin's militaristic adventures in Ukraine, rapid exchange rate (rouble) depreciation, among others. Compared to the contraction in 2009 though, the last quarter's decline looked "mild." This chart is from RT, August 11, 2015. 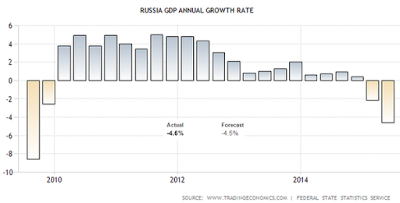 The next three charts are from the European Parliament Research Service (EPRS), March 16, 2015. 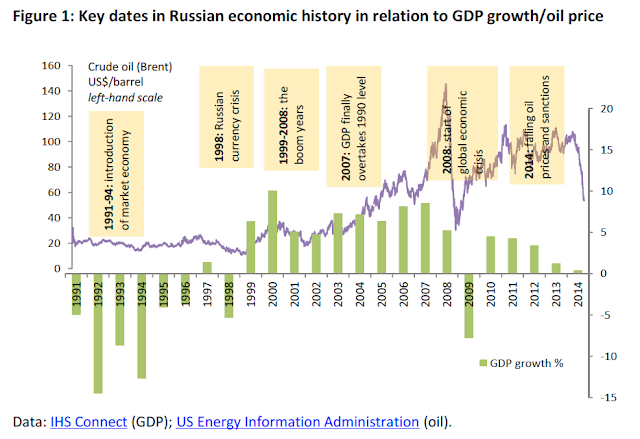 (b) Russian domestic economy and exports are highly dependent on energy, oil and gas.

(c) The rouble fell (almost a collapse) in December 2014, recovered the next month , then resumed the depreciation in succeeding months. 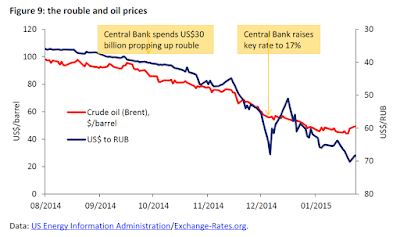 And these charts are from the Financial Times, December 17, 2014. 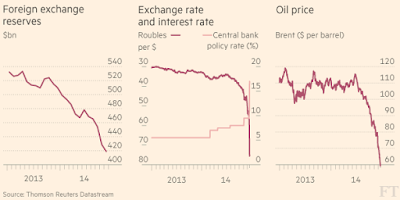 Some lessons for Mr. Putin and Russian economy:

1. Global capitalism can be violently unpredictable but major shocks very often, are favorable to consumers, like the on-going low world oil prices. Another example are low world interest rates.

2. Military adventurism is bad, it invites adverse reaction from other major players in the world. The west's economic sanctions against Russia seemed to be more harsh than any military action.

3. BIG, highly interventionist governments can only fake some numbers and they only postpone minor shocks into bigger shocks later.
Posted by Bienvenido Oplas Jr at 10:51 PM