The proposed Trans Pacific Partnership (TPP) agreement involving 12 countries in East and West Pacific, final negotiations collapsed last month.  Reposting some relevant news and views about the issue. This chart is from FT.com.

old but long discussion in the Financial Times (FT).

It is so difficult to envisage all 12 countries agreeing on such a complex agenda that some commentators have sought another explanation for the TPP. Many, noting the absence of China, regard it as a geopolitical club masquerading as a free-trade one. Until recently, editorials in the official Chinese media regularly thundered against the TPP, describing it as a plot designed to contain China’s rise...."
http://www.ft.com/.../8c253c5c-2056-11e3-b8c6...

"Ironically, the insights of Adam Smith, David Ricardo, and indeed Paul Krugman, are more relevant than ever. Larger, more integrated markets raise living standards through increased specialization and greater competition. The old view of trade in which products are made in one country and sold in others no longer applies. Instead, goods and services are now “made in the world,” as final products are assembled using intermediate inputs from a large number of countries."
http://www.hks.harvard.edu/.../news/articles/what-is-the-tpp 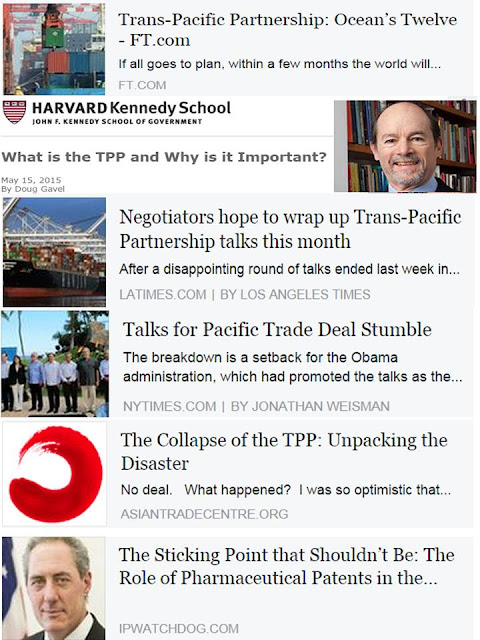 "Secretary of State John F. Kerry, in Singapore on Tuesday, hailed what he called "good progress" made during the meetings last week. In his speech, Kerry expressed confidence that the trade agreement will promote economic opportunities and a "stable, rules-based order for the Asia Pacific."

Deborah Elms, a trade specialist in Singapore, called the Hawaii meetings a big letdown given the expectations that a final agreement would be reached.

"I think the plan was to have John Kerry to do a victory lap in Singapore — to say that the pivot [to Asia] is here," said Elms, executive director of the Asian Trade Center, a research and consulting firm. http://www.latimes.com/.../la-fi-tpp-talks-20150806-story...

"In the end, a deal filled with 21st-century policies on Internet access, advanced pharmaceuticals and trade in clean energy foundered on issues that have bedeviled international trade for decades: access to dairy markets in Canada, sugar markets in the United States and rice markets in Japan.

“No, we will not be pushed out of this agreement,” said a defiant New Zealand trade minister, Tim Groser, who held out for better access for his country, the largest exporter of dairy in the world.

Australia, Chile and New Zealand also continue to resist the push by the United States to protect the intellectual property of major pharmaceutical companies for as long as 12 years, shielding them from generic competition as they recoup the cost of developing next-generation biologic medicines." . http://www.nytimes.com/.../tpp-trade-talks-us-pacific...

"If I had to put my own finger on it, the immediate cause of collapse can be traced to Canada’s refusal to discuss dairy in any meaningful way until the final 3 days of negotiations. This was, as I have previously noted, a high risk strategy.

I assume officials gambled that, if they waited until the bitter end, everyone else would be so willing to get a deal done that they would take whatever poor offer Canada made on dairy liberalization.

The gamble could be taken, in part, because negotiations over dairy are infinitely more complex and time-consuming than equivalent difficulties in other sectors. For instance, another problematic issue for ministers in Hawaii concerned the patent length for biologic medicines. But the fight over patent length, while serious for participants, could at least be sorted quickly. The number was gong to be 12, 8, 7 or 5 years of protection. The choice might be hard, but once made, the final figure could be quickly slotted into the waiting text."
http://www.asiantradecentre.org/.../the-collapse-of-the...

"Contrary to the critics, the TPP Agreement should enhance access to medicines, through the economic benefits of greater trade and growth.

The Trans-Pacific Partnership can ensure that despite the difficulty, risk and expense of pharmaceutical innovation, firms continue to invest. International trade agreements such as the TPP set global precedents, which makes it even more critical that the agreement must ensure that innovation is protected, that breakthrough therapies are incentivized and that intellectual property protection is strong and enforced. The protections set forth in the TPP Agreement shouldn’t be a sticking point. Far from it. They should be a template for global IP rights that encourage innovation and enhance global health."  http://www.ipwatchdog.com/.../role-of.../id=60283/
Of the 10 ASEAN countries, only four were invited in the TPP -- Vietnam, Singapore, Malaysia and Brunei. I think among the reasons why only those 4 countries were invited is because they have little restrictions on foreign investments. Even socialist Vietnam is more friendly to global capitalism than the PH or Indonesia.

I support the DTI and official government position that the PH should join the next round of TPP membership expansion. There is little chance that the PH can have a bilateral FTA with the US, the biggest, most innovative economy in the planet for the next decade or two. Vietnam and Malaysia will soon have greater access to the US, Canada markets compared to non-TPP members in the ASEAN.
----------