Church and State 3, Iglesia ni Cristo is NOT above the law

But the leaders and members of the Iglesia ni Cristo (INC) think they are above the law, that the law against road occupation, especially Edsa, may apply to other groups but not to them.


Rule of law vs. welfarism. Many INC members who went to Edsa were recipients of various welfare programs and now lambast the government. One more proof that when government is lousy in enforcing the rule of law, it can be lousy and wasteful in its populism and welfarism.

I was one of their millions of Edsa traffic victims. Last night, Sunday, my bus from Pangasinan arrived at Cubao terminal around 12 midnight. Immediately I sensed a problem. Very few metro buses going south, the taxis were haggling for higher price, few “ordinary” cars but there were many provincial jeepneys and buses plying Gapan-Cabanatuan, Lubao-Angeles, Dagupan-La Union, etc. And there were many vans too that appeared to be full of people.

I sensed that they were Iglesia members wanting to further choke usually traffic-choke Edsa. After waiting for about 25 minutes, I was able to ride a south-bound bus. There were many people walking in Cubao going south. At Camp Crame, I saw many parked provincial jeepneys, buses and vans. Our bus was crawling. I saw many New Era University buses (Iglesia-owned) carrying many passengers. I think those were among the hakot buses. 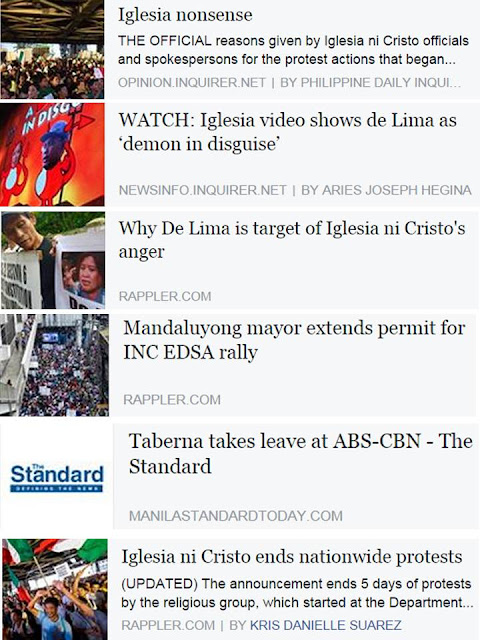 There were also many vehicles, provincial jeepneys and buses, parked on the other side, north-bound, of Edsa. At Ortigas flyover, south-bound traffic has finally halted, past 1am already, Our bus went to C5, we managed to evade the Iglesia mob rule at Edsa-Crossing. We exited at Edsa Buendia. Magaling, si Sec. de Lima kaaway nyo, dinamay nyo milyon pa na ibang Pilipino. I arrived home past 2am.

Last Saturday midnight, around 2:30am, I travelled to Cubao to go to a provincial bus terminal in Cubao. Edsa-Crossing was closed, blocked by MMDA vehicles and officers. I think there were very few Iglesia rallyists at Edsa-crossing. Is MMDA Chairman Francis Tolentino an Iglesia member too? His boys are busy apprehending and penalizing many motorists in Edsa for "obstruction of traffic" and other traffic violations. But these Iglesia militants blocking a big portion of Edsa are allowed and guarded by his boys.

Mob rule can beat rule of law anytime when governments are too busy with so many functions, state-owned businesses and welfarist/populist functions. Penalizing motorists even for minor traffic "violation" (and they created lots of prohibitions and restrictions; more prohibitions, more potential violators, more fines and extortion) that transform traffic officers into tax and fine collectors, good business. When real traffic violators like a mob occupying a very busy road come in, those "public servants" chicken out.

The Iglesia leaders and their followers always think they are above the law. They can demand money from local to national candidates every 3 years election period in exchange for political support via bloc voting of their members. They hate that their leaders can be subjected to DOJ criminal investigation involving illegal detention of their former "kapatid" whom they have later expelled.

The big issue is the inability of the government, both national and local (PNP, MMDA, City governments) to enforce the rule of law -- the law against road occupation by any groups and penalizing violators. If you are a big church group or cult like Iglesia, you can get away with the law with zero penalty.

Some leading Presidential candidates even blatantly and shamelessly support the mob rulers, so long as they can support him/her in the elections next year with their known bloc (and mindless?) voting. 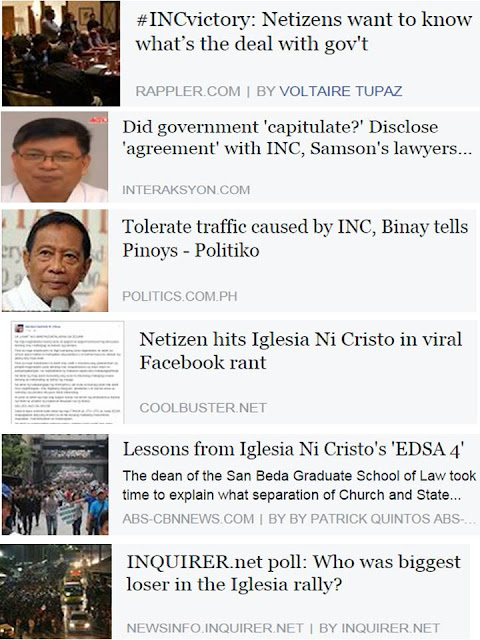 If the government, local and national, allows exemptions to the restrictions of the law (the law applies strictly to some but not to others), then that is rule of men. The rulers make arbitrary exemptions and applications of the law.

Binay and Grace Poe are losers for siding with the Iglesia cultist-we're-abobe-the-law militants. Where is Chiz Escudero, partner of Grace Poe? http://newsinfo.inquirer.net/.../inquirer-net-poll-who...

And Carlos Celdran, why he did not lambast the "Damaso" of Iglesia? Maybe he's scared of this church's mob while he was confident that the Catholic church won't harm him.
-----------