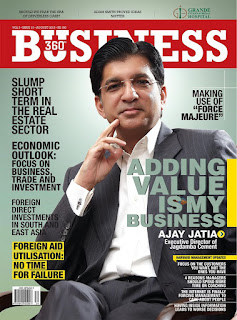 Foreign investments are among the key ingredients for developing countries to hasten their growth and development. Two prominent proof of this are small territories, small population, but big economies Hong Kong and Singapore. They started as very poor economies in the 1950s and 60s respectively and their openness to global trade and investments very early have allowed them to maximize the financial, technological and managerial resources that foreign businessmen and professionals could share.

There are two main avenues for foreign capital to enter an economy. Via foreign direct investments (FDIs) and via portfolio investments like the stock market.  Here we will discuss only FDIs and leave the latter to future topics in this column.

The UN Conference on Trade and Development (UNCTAD) has released the World Investment Report (WIR) 2015 in late June 2015. In the report are a number of very interesting data, some of which will be discussed here.

Cumulative values of FDI inward stock, net of capital outflows, is an important indicator of foreign investments in an economy. Here are the numbers. 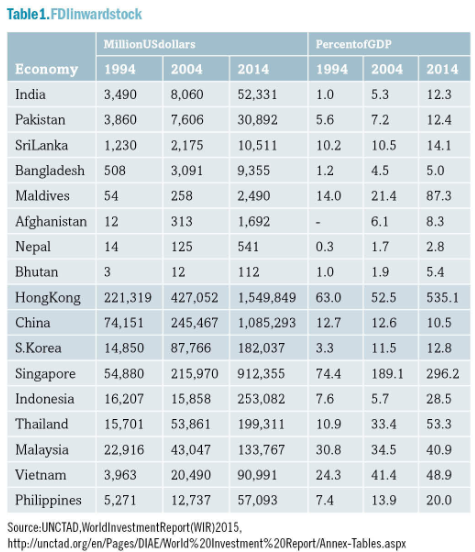 South Asian economies overall were not able to maximize the potentials of FDIs all these years. India has the biggest FDI inward stock in the region, but comparing what it got with small population, small territories Hong Kong and  Singapore, the investments  it has attracted looked modest.

Nepal in particular needs to be more open to foreign investments considering the small amount it has attracted with just half-billion dollars as of 2014.

Socialist economies China and Vietnam that allowed certain degrees of economic freedom and the market system were able to maximize the potentials and benefits of FDIs. Vietnam’s FDI stock has expanded 23x in just two decades while China’s has expanded by 15x.

Other South East Asian economies were also able to expand their FDI stock rather fast. Aside from Vietnam’s 23x expansion, Singapore and Indonesia expanded 16x, Philippines 11x, and Thailand 9x.

We now check the value of FDI inflows over the last three years. The numbers for Afghanistan, Nepal and Bhutan are not good, the low values they got in 2012 further shrank in the next two years. Thus, the share of FDI as percent of gross domestic capital formation (GDCF) or simply total domestic investments, has been declining.

Bangladesh, Sri Lanka and Maldives have retained the average inflows per year while India and Pakistan have ramped up the FDIs they are attracting. 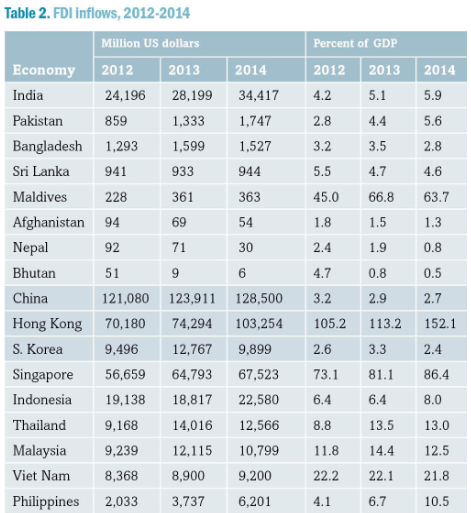 Some important lessons that South Asian economies can learn from their neighbors in North East and South East Asia would be the following. 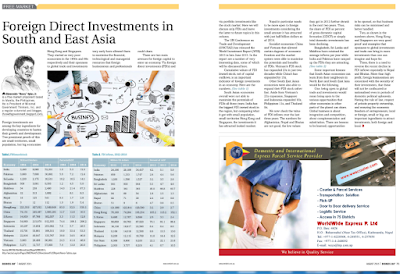 One, being open to global trade and investments would mean being open to the various opportunities that  other economies in other parts of the planet can share. Global business is about integration and competition, about complementation and substitution. There are lessons to be learned, opportunities to be opened, so that business risks can be minimized and better handled.

Two, as shown in the numbers above, Hong Kong and Singapore are very good proof and examples that openness to global investments and trade can bring in more investments than one can imagine and hope for.

Three, there is a need to reverse the recent decline in FDI inflows especially in Nepal and Bhutan. More than high profit, foreign businessmen are concerned with the security of their investments, that these will  not be confiscated or nationalized even in periods of domestic political upheavals. Having the rule of law, respect of private property ownership, and ensuring the economic freedom of entrepreneurs, local or foreign, small or big, are important ingredients to attract investments, both foreign and local.
------------