Election PH 16, The Presidentiables and the Iglesia militants

That is just one example of their political and electoral meddling in the country. Now they demand a "separation of church and state."

The leading contenders for President in the 2016 elections are treading carefully, if not favorably, of the INC. 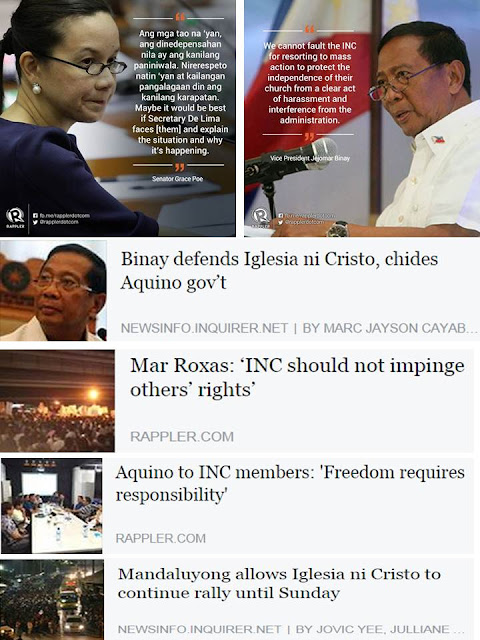 Sen. Grace Poe. I was leaning to support you, but with this statement, goodbye na tayo. These Iglesia militants in Edsa are defending their insecurity and hypocrisy, not their faith. If they defend their faith, they should be in their churches, or other public places, NOT in already traffic-choked Edsa.

Binay is known for political opportunism. His statement is expected, not surprising. Pag may dugo, sisipsip talaga ang linta.

Sec. Mar Roxas, good statement here. I hope you will order the PNP to clear EDSA of these militants. Iglesia members will hate you if you do that, but you will gain more votes from the non-Iglesia.

The President has spoken, rightly. Thank you Mr. President.

Mandaluyong city Mayor Ben Hur Abalos and councilors are also scared of the Iglesia militants. The city government gave a permit after the militants have already created horrible traffic in Edsa since last night.

And MMDA Chairman Francis Tolentino, you and your boys are too eager to apprehend and penalize many motorists everyday for "obstruction of traffic" or other "traffic  violations" in Edsa. The Iglesia militants are obviously creating heavy traffic and you allowed them. Scared also of the Iglesia that they might reject your Senatorial ambition next year.

Any serious politician who will challenge this Iglesia bullying and risk being rejected by their bloc voting deserves support. We are not talking about shrinking government here. We are simply talking about government being able to enforce the rule of law. The law applies to all, it applies equally to unequal people. If all other groups are prohibited -- and they should be prohibited -- from occupying Edsa, then that law should apply to the Iglesia militants too. In this case, the Iglesia guys are exempted. Mob rule beats the rule of law.
----------------