Here is another instance that while there are hawkish calls for military and political confrontation between the US and China in the future, another side of reality is that there are many instances of cooperation and dialogue between the two biggest economies in the planet. Being a non-believer and non-advocate of  BIG government, I side with the non-militarist view, of more trade and investments relations between and among countries as the key to a more peaceful, more prosperous world. 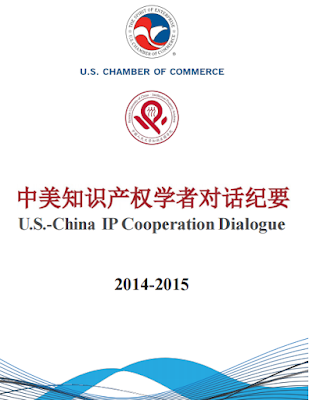 There is an existing US-China Intellectual Property (IP) Cooperation Dialogue. The first report was released last year and the new, second report was released by the joint US-China working group only last August 10. This initiative is a collaboration between the U.S. Chamber of Commerce and Renmin University’s China Intellectual Property Academy.  Meaning this is a non-government, civil society initiative, and it brings together 10 thought leaders annually, five each from the US and China.

It is a good initiative, to strengthen IP rights in China. Being politically socialist, the possibility of the China government socializing and nationalizing certain private properties, physical or non-physical/intellectual, will always be there, no matter how small that possibility is. Thus, involving the academe and other civil society actors to help strengthen the rule of law, encourage people, public and private leaders, to respect and protect private property is a great initiative.

This is the report’s Executive Summary:

• Use quality instead of quantity as the measure of innovation.

• Explore the possibility that a judicial interpretation be issued to ensure no injunctive threat is available until utility model patents have been substantively examined for validity.

• Adopt a more balanced and market-driven approach to promote innovation by entrepreneurs, inventors and universities.

• Improve the patent linkage system, and provide effective protection for clinical data of new chemical entities by using the ongoing effort to amend the Patent Law and the Drug Administration Law as an opportunity for change.

• Improve the guiding case system with respect to procedures for reviewing, selecting and releasing cases and support better adoption of case law information.

• Recommend research on the possibility to have a stand-alone and uniform trade secret law, in order to effectively maintain a fair market competition environment.

• Address new problems created by changing technology and business models; develop a good ecosystem for innovation by the interaction of law and the marketplace; and provide more market opportunities for copyright holders while dealing with piracy.

The report also examines why China’s talent pool and investments did not result in new drug discoveries and calls for transparency and stability of the Chinese legal process, including establishing one single IP appellate court, a searchable case database and an amicus system.

An effective IP system that leads to a lot of innovation should be supported by the rule of law and implemented in a competitive environment. Continued innovation, improvement of old and existing technologies and processes, is our assurance for a more prosperous, wealthier and healthier life in the planet.

I hope that this non-government, civil society initiative will be heard and studied especially by the China government. Being a member of the civilized international community of nations and governments, respect of private property even by socialist leadership is a responsibility of member-governments.

See the full report here, 70+ pages, more than half in Chinese language, http://www.theglobalipcenter.com/wp-content/uploads/2015/08/US-China-IP-Dialogue_2014-2015.pdf