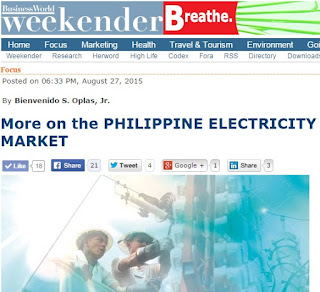 THIS is a continuation of an earlier discussion, “The Philippine electricity market: Monopoly and competition” (Weekender, August 14).

As noted in that article, Carlos Jericho L. Petilla had issued, before he resigned as energy secretary last June, DoE Circular No. DC2015-06-0008, “Mandating All Distribution Utilities to Undergo Competitive Selection Process (CSP) in Securing Power Supply Agreements (PSA).” That order aims to address, among other things, the suspicion of “sweetheart deals” between some big electric cooperatives (ECs) and distribution utilities (DUs), on the one hand, and the generating companies (gencos), on the other, resulting in expensive electricity prices in the Philippines.

Here is another data, a bit old, from a 2013 commissioned study by the US Agency for International Development (USAID). The first set shows the actual prices including taxes (in Philippines and Singapore) and subsidies (Thailand, Malaysia, and Indonesia), and the second set, adjusted prices if taxes and subsidies were minimized, next to zero.

The USAID report explained why the adjustment was done: “Several factors may explain these wide differences. One is tax: effectively 9% in the Philippines, as opposed to 6% in Malaysia and 7% in Singapore and Thailand, albeit 10% in Indonesia. But the bigger contributor to the price differences is the implicit subsidies to state-owned utilities. The International Energy Agency (IEA) estimated that the electricity subsidies in 2011 in Indonesia, Malaysia, and Thailand were at least 5.56, 0.94, and 5.67 billion US dollars, respectively....” 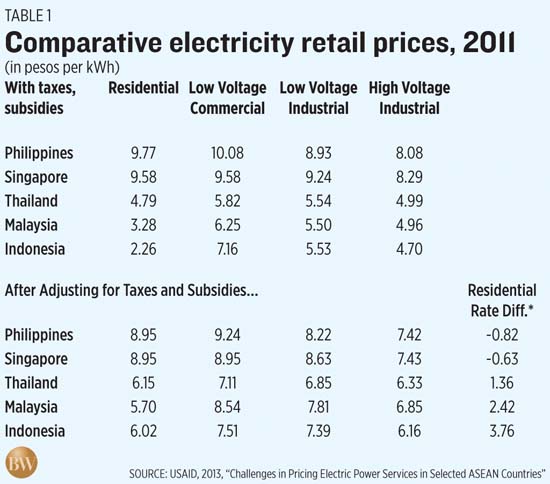 Thus, most if not all comparative electricity prices are based on artificial pricing. People blame gencos or the big DUs but not governments which intervene a lot in electricity pricing, resulting in either very high or very low prices.

The DOE Circular was the subject of discussion in a forum organized by the Energy Policy Development Program (EPDP) early this month. There were six speakers, led by OIC-Secretary Zenaida Y. Monsada of the Department of Energy (DoE), Director Mylene Capongcol also of the DoE, UP School of Economics professors Raul Fabella and Ruperto Alonzo, UP College of Engineering professor Rowaldo del Mundo, and Romeo Bernardo of LBT Consulting.

Mr. del Mundo is the lead technical adviser to the Central Luzon Electric Cooperatives Association-First Luzon Aggregation Group (CLECAFLAG) under the USAID COMPETE project. Twelve ECs in Central Luzon aggregated their total power demand of 300 MW, auctioned it off, and contracted for 20 years the winning supplier, won by GN Power (with expanded capacity of 1,200 MW in Bataan). In his presentation, Mr. del Mundo showed this table of comparative electricity prices in the ASEAN.
By pounding on the need for demand aggregation by DUs as shown in the CLECAFLAG experience, Mr. del Mundo concluded, “The mandatory CSP is the only antidote to [the] EPIRA’s [Electric Power Industry Reform Act] cross-ownership that will avoid temptation to parties with conflict of objectives.”

There is a problem in this conclusion of supporting mandatory or obligatory, instead of voluntary, CSP, based on specific circumstances among DUs and gencos. For the following reasons:

One, as shown in Table 1, we have high electricity prices because the government imposes many taxes on energy while other ASEAN countries subsidize their energy consumption.

Two, Mr. Bernardo noted in his presentation that “Growing pains from regulatory uncertainty, and contracting, approval, and construction bottlenecks have delayed new plants. The average time it takes to build a baseload power plant in the Philippines is probably double elsewhere. Just getting approvals, coupled with overcoming NIMBY opponents, is an ordeal.” And he showed this list of some 200 signatures and permits needed to put up one baseload plant. 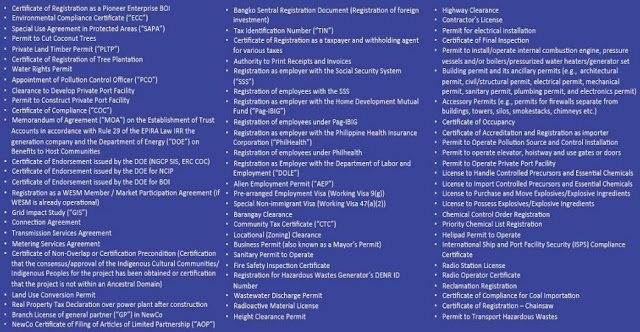 Three, Mr. Fabella suggested market testing of PSA contracts instead of mandatory CSP. Market testing is easier to enforce because the Energy Regulatory Commission (ERC) only verifies and approves the market test (say, auction) employed, and is easier to defend in public. There are many modalities for market testing like the cases in Chile, Brazil, New England.

Four, there’s the big question of who are the “third parties” that will be recognized by the DoE, the ERC, and the National Electrification Administration (NEA) which will approve or disapprove the PSA between the DUs and gencos. Will they work for free? Very unlikely. Rather, the DOE and ERC will be forced to make extra budgetary requests to pay for these “third parties” including allowances for their meetings and public consultations.

It is also possible that NGOs, the media, and other sectors actively or silently supporting the “Repeal/Abrogate EPIRA” movement may position themselves as “third party” referees. The DoE circular is not about repealing or tinkering with the EPIRA.

In short, the DoE circular is barking at the wrong tree: By making the competitive bidding mandatory rather than voluntary, it will invite or create more problems than what it intends to solve. The circular should therefore be withdrawn. Or amended to make CSP voluntary, not mandatory. The DoE and other government agencies should instead address other problems and contributors to expensive electricity in the country. Like multiple taxes, numerous permits by the Philippine government, from the barangay to city/municipal, provincial, and national government offices and agencies. Requiring a firm to present up to 200 different permits would expose it to 200 different opportunities of corruption and extortion.

Government should simply learn to step back from too much intervention, regulation, and taxation.