Election Watch 2: On Celebrities as Politicians

For many people, politics and government is a serious topic that only those academically and politically trained enough should enter politics. The showbiz guys, sports superstars, should keep out of politics and running for political offices because they are less trained or less prepared for the rigor of legislation and political-economic debates.

My former organization when I was still an undergrad student at the UP School of Economics in the mid-80s, will hold a round table discussion on this subject next week, on Wednesday afternoon. Early this week, they invited me as one of the speakers, I said Yes. It is free and open to the public, no need for pre-registration. 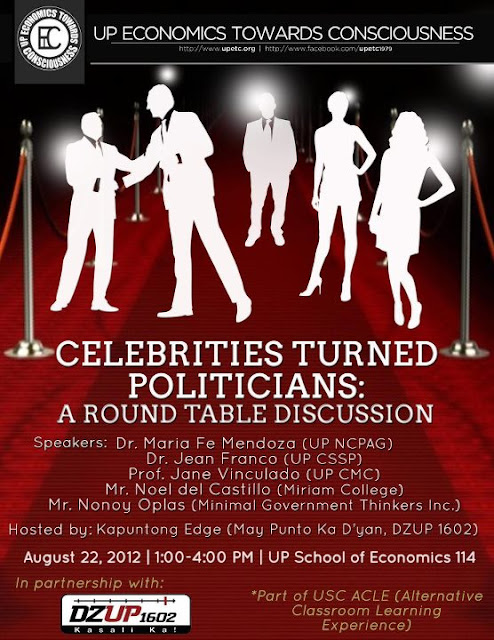 Depending on the flow of the discussion, especially if I will be among the last speakers, these will be my main messages.

2. The showbiz guys, the comedians and action stars, the songbirds and drama queens, the sports superstars, are just like any ordinary mortals among us who have been enamored into politics, and into believing that they can indeed change the world by regulating if not controlling how people should manage their own lives.

3. The democratic or republican form of government allows anyone who passes the minimum qualifications like age limit, a Philippine national, has no pending criminal records, etc. to for public office. This makes the government and its coercive powers be open for capture by anyone, from serious to comedians, from democrats to despots, so long as they get the majority of those who cast their votes.

4.  Since the list of prohibitions by government is getting longer, we should endeavor to reduce this list, or at least stop this long list from becoming even longer.  So that whoever will sit in government, showbiz or not, lawyers or not, their capacity to over-regulate or over-prohibit our lives will be limited.

5. From my initial observations, my hypothesis is that the showbiz guys tend to be less interventionist and less prohibitionist, than the non-showbiz legislators and politicians. Partly because the showbiz guys are more timid in introducing more legislative proposals that will subject them to possibly intense committee and plenary debates and questions.. Whereas the lawyers, the NGO guys who went to government, tend to have oodles of new regulations and "reform" measures to introduce, and they are not timid or ashamed to create more regulations, more prohibitions.

I have to dig data to see if the above hypothesis holds water or not.

Email ThisBlogThis!Share to TwitterShare to FacebookShare to Pinterest
Labels: Elections 2013, UP ETC, UPSE

Please take note of the change in venue. The event will be held at the UP School of Economics Room 114.