* This is my article last night in TV5's news portal,
http://www.interaksyon.com/business/40886/fat-free-economics-jesse-robredo-and-good-government
---------- 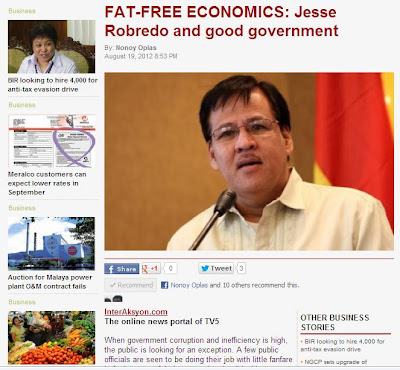 When government corruption and inefficiency is high, the public is looking for an exception. A few public officials are seen to be doing their job with little fanfare in furtherance of their personal and political interests.

The Secretary of the Department of Interior and Local Government, Jesse Robredo, is one of those few high officials in the current administration whom many people think belongs to that exceptional breed.

Unfortunately, his plane crashed yesterday afternoon off the waters of Masbate. As of this writing (2 p.m.), he and the two plane pilots remain missing, almost 24 hours since the sad incident. I am one of the millions of Filipinos who are saddened by this event.

I have heard a number of good stories about the man, although I did not really read much on him. My mountaineering buddy in the mid-1990s, Jun Velasco, who hails from Naga City, would tell us that when there was flooding in the city after a strong typhoon, among the first persons they see on the streets when they wake up was then mayor Jesse Robredo. Wearing shorts and boots, holding a shovel and among those in actual action, and not just giving orders in clean shirts and pants.

On July 26, there was a big conference titled "The Role of SMEs in Fighting Corruption" held at Mandarin Hotel in Makati and sponsored by the Hills Governance Center of the Asian Institute of Management and a few other partners. Among the high government officials who were invited and had confirmed attendance were Trade Secretary Gregory Domingo, Sen. Edgardo Angara, Internal Revenue Commissioner Kim Henares, and Robredo.

Most did not show up except for Robredo. And he arrived on time, gave his talk, answered many questions during the open forum, gave media interviews after, before leaving the conference. That act alone made me admire him. I also liked his talk. 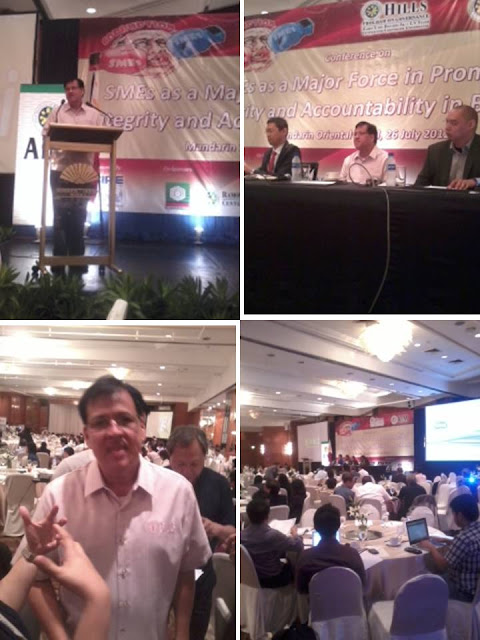 As DILG secretary, Robredo was concerned about limiting the unnecessary bureaucracies in local government units that can lead to corruption and economic inefficiency. When he became Naga City mayor, the normal period to approve a building permit was something like a month. So he talked to the business and building permit officials of City Hall, and they said it could be brought down to something like eight working days. Then he pressed further, and they settled at a nice number: three, assuming of course that all requirements were complete.

As DILG secretary, the hotels in Makati came to him to help them talk the Makati City LGU and the Bureau of Fire Protection out of a plan requiring all rooms in a hotel to have a fire extinguisher. Idiotic, right?

A hotel, especially modern ones, normally has multiple systems to detect and hence, stamp out fire, including a smoke detector and a water sprinkler system in each room. Besides, having a fire extinguisher is an ugly sight in a hotel room. It can be an unnecessary reminder to guests and visitors that the hotel guest themselves must learn to put out a fire if there is one in their room, or the hotel is lousy that it has no system of its own to stamp out fire that can break out in any part of its building. One can quickly surmise that such a measure would invite extortion.

Anyway, Robredo talked to the BFP and Makati City LGU about this and the planned measure was not pushed.

A shop - big, medium or small - must have the above permits prominently displayed in its premises. Not all of them are from LGUs, about half perhaps is from national government agencies like the BIR, DTI, SEC, SSS, etc. The other half is from LGUs, such as barangay permit, health and sanitation permit, electrical permit, mayor's permit, etc.

Anyway, Robredo's talk was among the highlights of the conference that day. His desire to reduce unnecessary bureaucracies, to control corruption, seemed very honest to me. But then again, he had no power to stop local legislation that will impose new taxes, mandatory fees, inspections and regulations. There are more than 1,500 cities and municipalities around the country, plus more than 80 provinces, and more than 42,000 barangays. Each LGU has the fiscal autonomy and political power to introduce new regulations and prohibitions.

If Robredo were gone, then it will be a big loss for the Philippine bureaucracy. I am not aware of other politicians who have the LGU experience and credibility as this man to take his place.

Nonetheless, big government is wrong. It will be a pointless effort to find honest and non-corrupt, non-abusive officials to manage government when the systems and bureaucracies allow or invite corruption and abuse. Like when a government office and bureaucrat has the power to say yes or no to someone who only wishes to put up a simple bread shop or internet shop or restaurant.
---------

Meanwhile, here's a testimony from a friend and fellow columnist in www.thelobbyist.biz, Luie Montemar:

‎"Jesse Robredo once agreed to talk before a development studies batch that I handled at DLSU. The students organized the talk and were very concerned about approaching the then Citizen Robredo who, they then thought, might be like some political personalities who would demand so much from event organizers. Sec Robredo arrived in simple smart casual attire. Made a wonderful, inspiring presentation and left after answering questions from the students. He came without fanfare, didn't require anything special; he even refused to be fetched from the gate. A soul whose mission was to share. We continue to hope..."