Patent, copyright, trademark, other forms of intellectual property rights (IPR) remain a thorny issue among many people who either (a) want social or state ownership of many things, physical or intellectual, or (b) consider that all ideas are similar so that both mediocre/idiotic and bright ideas should not enjoy any form of property rights protection. 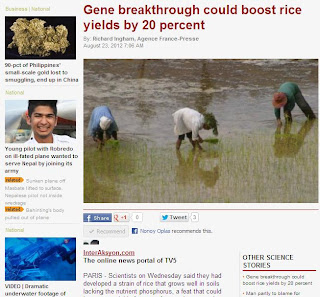 Yesterday, I debated Teddy Boy Locsin on twitter. He is a former Congressman, former Presidential Spokesperson (Pres. Cory's time), media personality. He is also a fellow columnist in www.interaksyon.com but he's definitely more famous than a newbie like me, that's why he has more than 23,000 twitter followers.

The subject is about a new rice variety developed by some rice scientists and the gene has been transferred to the International Rice Research Institute (IRRI) in Los Banos, Philippines.

It is not clear from the news report if it was IRRI scientists themselves, or other scientists from other countries or private biotech companies, that developed that new rice seed variety. See the full news report below. These tweets were posted from around 7:20am to 8:28am yesterday.
------------

Teddy Locsin Jr. ‏@teddyboylocsin
@Noysky @interaksyon Not when seed companies sue right and left, even on seed varieties native to the place that they patented.

Teddy Locsin Jr. ‏@teddyboylocsin
@interaksyon @Noysky @RiceResearch If IRRI has patent, then it is out our pockets and in our pockets again, so okay. IRRI is ours right?

Teddy Locsin Jr. ‏@teddyboylocsin
@Noysky @interaksyon @RiceResearch I hope IRRI is ours or does it do research and Monsanto steals it?

Nonoy Oplas ‏@Noysky
@teddyboylocsin @interaksyon @RiceResearch I think biotech like Monsanto, PhilRice do own R&D, patent them, IRRI get sampls for its genebank

Teddy Locsin Jr. ‏@teddyboylocsin
@Noysky @interaksyon @RiceResearch I hardly qualify as a bleeding heart as I am usually heartless.

Teddy Locsin Jr. ‏@teddyboylocsin
@Noysky @interaksyon @RiceResearch Um, where's the hard research by Monsanto when the work is done by Pinoys in IRRI?

Teddy Locsin Jr. ‏@teddyboylocsin
@Noysky @interaksyon @RiceResearch And the heartless are the best kind in a fight for proper compensation for intellectual property use.

Today, IRRI replied to the tweets and here are the exchanges, posted around 8:15 to 9:30am today:

IRRI ‏@RiceResearch
@noysky @teddyboylocsin @interaksyon Thanks for the great conversation! FYI IRRI does not hold any patents - we share all our new...

Teddy Locsin Jr. ‏@teddyboylocsin
@RiceResearch @Noysky @interaksyon Poor you. You do the work, the whites get the money. There is a reason why we are brown.

IRRI ‏@RiceResearch
@noysky @teddyboylocsin @interaksyon We work all across the world to share our research to benefit as many farmers as we can :-)

Below is the full news report.

PARIS - Scientists on Wednesday said they had developed a strain of rice that grows well in soils lacking the nutrient phosphorus, a feat that could boost crop yields for some farmers by as much as a fifth.

The announcement ends a quest to pinpoint a mystery gene that helps the roots of baby rice plants tease phosphorus from the soil, enabling them to notch up strong, early growth.

The gene has now been transferred to modern varieties of rice using classic methods of cross-breeding, not genetic engineering, said Sigrid Heuer at the International Rice Research Institute (IRRI) in the Philippines.

Next week, national rice breeders from Bangladesh, India, Thailand and India will be briefed on the exciting find, which should benefit small farmers most of all, Heuer said in a phone interview from Manila.

"I would expect to see (an improvement in yield of) around 20 percent, but it depends so much on the type of the soil and how severe the stress is," Heuer said.

"But realistically, we are talking conservatively of an average of 10-20 percent, and locally a little more if the (phosphorus) stress is severe," she said.

The breakthrough seeks to address one of the biggest problems facing rice growers from the southeastern United States to South America, Southeast Asia and China.

Many soil types bond tightly to phosphorus, surrendering only a tiny amount of the precious mineral to plant roots.

To get around this, farmers look to phosphorus fertilizers which are spread on the field.

But in poorer countries, this option is often too costly, which means the plant is left undernourished at a stage when it is in competition with weeds. Ultimately this meager growth affects yields when the plant matures.

The search for PSTOL-1 -- for phosphorus-starvation tolerance 1 -- began in the late 1990s, when researchers were intrigued that a rice strain grown in India called Kasalath grew so well in phosphorus-deficient conditions.

But it took nearly a decade of further work, including a full sequencing of the strain's genome, to close in on the gene that does the magic.

"Over the last one-and-a-half to three years, we were pretty certain that we had the gene, but then we had to carry out a lot of experiments to confirm our findings," said Heuer.

Poor farmers, especially those in Southeast Asia and Bangladesh, could benefit most, she said.

But rice growers in richer countries could also save money as they would need less fertilizer, which would also mean less damaging phosphate runoff into groundwater and the sea.

The research, published in the journal Nature, marks the latest laboratory exploit for boosting rice yields. Other recent finds have been genes that help rice plants cope better with drought and saline soil.

Arguably the most important crop in the world, rice is under pressure from rising demographic growth and the impacts of climate change.

Last October, the UN Population Fund (UNFPA) said the global population of seven billion could rise to at least 10 billion by 2100, but could top 15 billion if birth rates are just slightly higher than expected.

Phosphate fertilizers are typically extracted from layers of rock that millions of years ago were ocean sediments.

Wow, nice post, there are many person searching about that now they will find enough resources by your post. Thank you for sharing to us. Please one more post about that..soft toys