The main sources of development assistance for health (DAH) is slowly shifting from official foreign aid (bilateral and multilateral) to international NGOs and public-private partnerships. This is a good development.

I saw a nice interactive treemap from the Institute for Health Metrics and Evaluation (IHME) just recently posted, on the global channel of DAH from 1990 to 2011,
http://www.healthmetricsandevaluation.org/tools/data-visualization/development-assistance-health-channel-assistance-global-1990-2011-interacti#/overview/stories 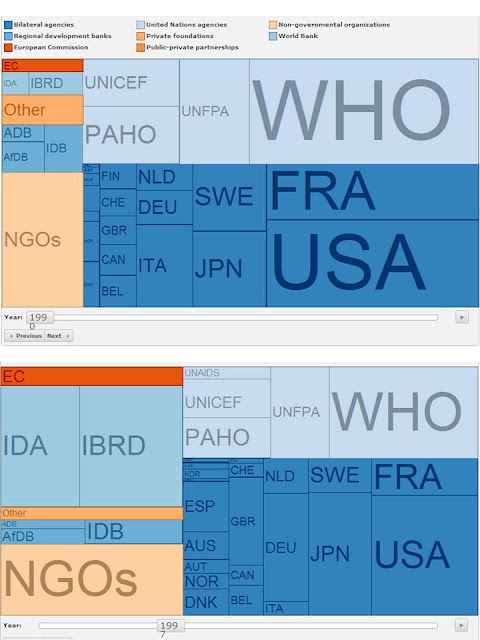 In 1990, it seemed that about 90 percent or higher, DAH were channeled via official foreign aid bodies, especially through the World Health Organization (WHO) and the governments of France and the US. Seven years after, the World Bank or IBRD and its attached agency International Development Association (IDA), plus the government of Japan, became more prominent.

By 2004, the NGOs and the Global Fund to fight AIDS, TB and Malaria (GFATM), a public-private sectors partnership, showed prominence while the WB-IDA, WHO and US government remained among the major channels and donors.

Last year, the GFATM, the Bill and Melinda Gates Foundation (BMGF), GAVI (Global Alliance for Vaccines and Immunization), another public-private sector alliance, and other NGOs have become really prominent, channelling around one third of the global DAH. I think a substantial amount of the funding for GFATM and GAVI also came from the BMGF. 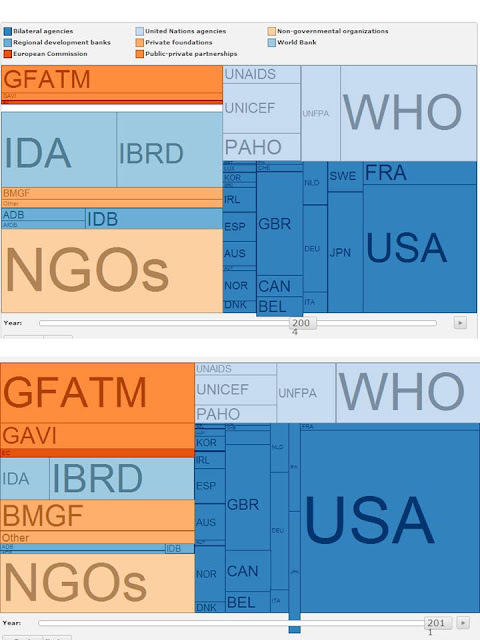 The official foreign aid channels still dominate, like the WHO, WB, US and UK governments. But we should recognize that not all of such foreign aid is comprised of actual service delivery to poor patients. A substantial amount of US Agency for International Development (USAID) funding for health for instance, is to finance various studies for public health policies. I think many faculty members and researchers of my alma mater, the UP School of Economics, make big money from USAID to do various research projects on healthcare.

The same with UK foreign aid via the Department for International Development (DFID). One DFID project for instance, is the Medicines Transparency Alliance (MeTA), a big multi-sectoral alliance to advance more transparency and accountability in medicines pricing, procurement, dispensation, and other services. There are MeTA projects in seven countries including the Philippines. The health coalition that I belong where I represent MG Thinkers, CHAT, is the civil society partner of MeTA Philippines.

With the fiscal burden of ever-rising public debt by the governments of the industrialized economies like the US, UK, France and Italy, the share of the official foreign aid I think will slowly but steadily decline. Those governments will be stuck in dealing with huge domestic health concerns with their ageing population and rising spending for interest payment. International NGOs and corporate foundations will slowly take the tab.

What this means is that global healthcare will slowly move from heavy "government responsibility" to more "personal and civil society responsibility." We will watch future data to see if this hypothesis will hold.
---------