My deep condolence to the families of young students who have died of violent fraternity hazing and initiations, the latest of whom is San Beda law student Marc Andrei Marcos. And to families and friends of victims of murder and other forms of killing. 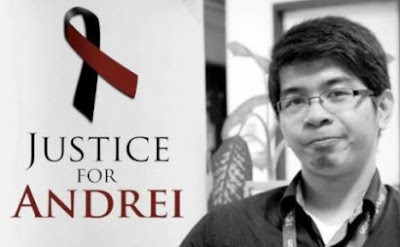 I have my share of stories about those frat hazing and frat rumbles when I was still an undergrad student in UP in the mid-80s. But let me share below what a friend, Atty. Theodore "Ted" Ty, a professor at the UP College of Law, wrote about the subject. Andrei was brought to a hospital last Sunday night severely beaten, and died the next day.

I deliberately refrained from posting anything on the latest killing of an aspiring fraternity member (Andrei Marcos) simply because anger and rage simply does not cut it when it comes to the utter stupidity of such traditions. I have written so many angry words already on this and have realized that no amount of anger makes a difference on those who would beat their own number and others of opposite number--in the name of brotherhood.


Those who know me know that I have always taken a strong position against fraternity violence and have spoken/written about it so many times. Those who belong to fraternities and have lived through their versions of this stupid ritual will defend it as essential to brotherhood; you have the right to define your notions of brotherhood and defend your rituals, I have the right to disagree with the stupidity of your notions and your rituals.


What is worse than the stupidity of this ritual is the utter cruelty of the code of silence--your version of the mafia's Omerta--that you live by. At least the mob was honest about its malevolent intentions and had no pretense that the infliction of pain was for anything more noble than "you had it coming."


No, what is worse is that the Omertà you live by deprives those who are orphaned of the only thing that they now have to hold on to after you took the life of the one they loved--the truth.


I have spoken to such a mother who asked me, her counsel, the questions she could not ask of those who killed her son, questions that attempted to make sense of an utterly senseless loss. She is a courageous woman, resolute in her determination that those who killed her son, Marlon Villanueva, should be made to account for what they did. She speaks very softly, always respectfully and apologizes for the inevitable tears that stream down her cheeks whenever she mentions the name of Marlon, her murdered son. She had no resources other than the love she had for the son she was deprived of; she had no longing other than to see that justice was served for those who killed her son--in the name of brotherhood.


I recall her face now as I write this and grieve for yet another mother, whom I have not had the pleasure of meeting, who bears this latest, senseless loss. I grieve for those others who have been orphaned in the name of brotherhood throughout the years: they, who live on and who try to make sense of the permanent absence of that life that was taken from them by those who would dare call him "brother."


I know that angry words will not stop you from killing again. I know that no amount of law will prevent you from enforcing your stupid rituals. I know that your code of Omertà will not result in meaningful prosecution of those who took the life of Andrei Marcos. I know that once the news cycle fades, Andrei will, like many others before him, become another number on a page.


I take comfort only in knowing that one day you shall be made to account for what you have done by an authority that is far, far greater than any that you might elude in this lifetime. I pray that when you are asked, "why did you do this to your brother?", you will be able to answer, with every ounce of sincerity you will be able to muster, "in the name of brotherhood."

When I was an undergrad student in UP, I was also recruited by at least two fraternities. One was the Ilongo frat, UP Silak. I think my body and heart were too weak to accept potential physical harm, I did not report to the group for the first phase of initiation after a brief "intro", a light slap on the face by a friend who recruited me and assured me that he'll stand by me. After I did not show up, I think he did not like me after. That was nearly three decades ago.

Another friend from one of those Greek named frats in the second floor of UP Palma Hall (then called Arts and Sciences or AS building), my dorm mate in Molave Residence Hall, also recruited me. Again, a brief intro, a slight slap in the face. I think I was simply a coward to physical violence then, I did not show up again for the first phase of the frat initiation.

When I moved to Yakal Residence Hall, one of my roommates joined another Greek named frat. There are are many Greek sounding frats in UP. My roommate then survived the initiation. I saw his legs, severely battered by paddles and even a baseball bat or other hard objects. He was laughing while showing me his swollen and battered legs, also beaten arms, implicitly bragging that he was able to survive real physical pain inflicted upon him, and that he was ultimately accepted in a known frat in UP with several highly influential political leaders of the country as among their alumni brods.

Then I moved to Narra Residence Hall, my first group of roomates were all alumni of Philippine Science High School (or "Pisay"), really bright boys, and two of them, Ariel and Gort, were members of another Greek named frat at the College of Engineering. While I did not see their system of frat initiation or someone who has undergone it, I saw how they prepared for a frat rumble. If they have a rumble with another frat, Ariel and Gort would ask me then, "Noy, our brods would come here to prepare for a rumble". Since they were very nice to me, I would be nice to them too and said "no problem." About 15 to 20 of their brods would assemble in our room, I saw different types of baseball bats, metal bars, chaku, etc. Then different jackets to hide those things in their body when they go out. It was good that I did not see any gun. Those guys were just prepared for a rumble but were not violent enough to carry a gun. Also, while their frat would be involved in one or two rumbles in a year with another frat, either from the same college or from another college, I did not hear serious injuries resulted from their rumbles. But I still cringed at the thought of those baseball bats hitting someone's head even once.

And still in Narra dorm, there was a rumble once between a group of Muslim UP students and another Greek-named frat composed mostly of body builders. Me and several dorm residents were watching tv at the lobby one afternoon, when suddenly a friend and fellow dorm mate, Mags, a Tausug, pulled his long sword or "kris" and chased a member of a frat who wandered at our dorm. It was a bit scary, the man was running for his life while Mags was chasing him with a really long sword, the distance between them was only about 3-4 meters. The man escaped harm by jumping over a temporary barrier at the dorm entrance, a long table.

I doubt if Mags had the intention of killing that man that day because I know Mags personally, he was a tall, silent but very friendly person. He brought his sword in his room after the incident then got out. We were able to talk to him, he was still mad that their opponent from an enemy frat was able to enter our dorm.

I don't remember if there were deaths in one of the rumbles among many fraternities in UP that time. I think there was none, but I heard of some deaths in frat rumbles in UP in succeeding years. Like the case of a member of Scintilla Juris frat who was beaten to death when he was cornered by an opponent frat near the main library building.

Those were in the mid-80s in UP, those were the days. I have plenty of frat men friends then and now, but I never envied them.

I wish to see the day that violence in the hearts and minds among men and women would significantly decline. Such violence will never go away, some people simply do not know how to control their anger and emotion. But at least such violence should be drastically minimized and controlled. By the individuals themselves, and the rest of society members.
----------