From so many lawyers in the Philippines, among them whom I highly respect is Atty. Theodore "Ted" Te. Not only that he was a friend way back in our undergrad days in UP Diliman in the mid-80s, I like the way he speaks frankly on many issues. 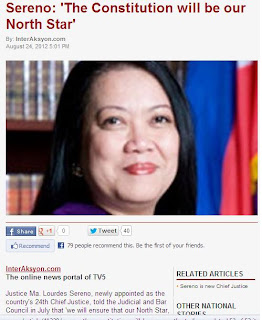 After the announcement of the new Supreme Court (SC) Chief Justice, UP Law Professor Ma. Lourdes Sereno, Ted posted these in his facebook wall. I like his opinions, so I am reposting them here.
---------

"For such a time as this": It is a landmark appointment in two ways--Chief Justice Sereno is the first female to sit as such and, unless sooner removed or resigned, she will also serve for the equivalent of the terms of three Presidents. It is also a nod to the past, specifically to the "deep selection" that the first President Aquino favored, with the Chief Justice bypassing all of her colleagues who were nominated for the same Office.

Chief Justice Sereno was my professor and colleague at the faculty of the University of the Philippines. A deeply prayerful person wont to quote scripture together with legal provisions, her biggest challenge right now is to transform--(a) herself from the Court's dissenter to the Court's leader and consensus builder by showing that she can do more than write courageous and stinging dissents, and (b) her image as the current President's favored one (being the first to be appointed as Associate and the first to be appointed as Chief Justice under his watch) by displaying, if necessary and where appropriate, an unexpected ingratitude to the appointing power. In doing so, she will thereby transform the Court that she now leads.

As I did when I learned of her appointment as Associate Justice (which was the last time I texted her), I offer her now my congratulations for the appointment and my prayers for courage, wisdom,strength and protection in the years ahead. Perhaps the call for her, as Chief Justice, is to not remain silent and hold her peace lest relief and deliverance rise from another place but to appreciate that she has been gifted with high office "for such a time as this." (Esther 4:14)

Comparisons and Parallels (some quick post-appointment notes and thoughts):

The first comparison would be the CJ Choice of two Presidents, both surnamed Aquino, 26 years apart; Cory, the first President Aquino, chose Claudio Teehankee Sr., the most Senior Associate Justice during the Marcos dictatorship who was bypassed twice presumably for being one of two great dissenters (the other was Justice Abad Santos); PNoy, the current President Aquino, chose Ma. Lourdes Sereno, his first SC appointment and not a senior Justice, who also was a great dissenter.

The second comparison would be the inevitable one--our SC is modeled after the SCOTUS; CJ Roberts of SCOTUS was 50 when he was appointed, CJ Sereno is 52. Roberts has a lifetime appointment and, thus, will outlast many more POTUSes, Sereno's tenure will amount to the equivalent of three Philippine Presidents.

The second parallelism would be in the way that seniority was followed or not followed. Cory did not follow seniority in appointing Teehankee to be CJ but then she did not have to as the members of the SC resigned to give her a free hand pursuant to Proclamation No. 1 declaring the government a revolutionary one; Teehankee's appointment was, thus, a "fresh" appointment and seniority in the SC started at that point. PNoy's appointment power is circumscribed by the seniority tradition that Cory's first SC started.

Breaking the glass ceiling: The Philippines has broken the glass ceiling for the Executive branch (two female Presidents) and now the Judiciary with CJ Sereno; only Congress is left.
--------

Meanwhile, below are interaksyon's tweets during her interview by the members of the Judicial and Bar Council (JBC):
http://www.interaksyon.com/article/41328/sereno-the-constitution-will-be-our-north-star

Q: What is your vision for a Supreme Court under Chief Justice Sereno?
Sereno: I want a community, shared vision.

What is your vision for an SC under "CJ" Sereno?
Sereno: Ayaw ko po ng "personalistic" na panunungkulan.

Sereno: * Reforms must not be dependent on personalities sitting in SC. There needs to be an institutional commitment.

* There are lots of judges who have good intentions but those intentions need to be articulated.

* wants "a national conversation," Judiciary to be guardians of this, for Phils to become "a great nation."

* We will ensure that our North Star, our Constitution, will be followed.

Q: What is your guiding philosophy as a law professor?
Sereno: I want to show my students the beauty of the law.

* It will haunt you. Hindi ka patutulugin ng konsensiya mo.

* The moment you accept a bribe, render an unjust decision, tuluy-tuloy na 'yan.

Q to Sereno: What do you think of a Chief Justice who always has a dissenting opinion?
Sereno: It doesn't mean that if you're on the dissenting side, you are unable to lead.

* After Teehankee was installed, no one among the justices blamed him for his dissenting opinions during Marcos' time.

* If we put an outsider (as Chief Justice), it's like appointing a civilian to be in charge of a war.

* I hope that people will recognize that there are many good justices. Reform can come from within.

* on death penalty: Our duty is to apply the law as we see it and that it conforms with the Constitution.

* The role of a judge is not to go into social experimentation.

* Not our role to make policy choices. Our duty is only to apply the law. Our personal preferences should not [interfere].

* There is a correspondence between the person rendering the opinion and the opinion's resonance.

* Justice can only be rendered if the judge rendering it is credible.
Three words: vision, courage, accountability.

* on Hacienda Luisita: We are not in a position to correct a historical injustice.

JBC: Do you abide by "No master but law, no guide but conscience, no aim but justice?"
Sereno: Of course.

Sereno: We are trying to mimic, replicate, the work of God. To right wrong, we do it, because our conscience requires it.
To apply the substantive law before us, in accordance of traditions.
--------

And here is her brief CV. She also went to UPSE for her MA Econ degree. 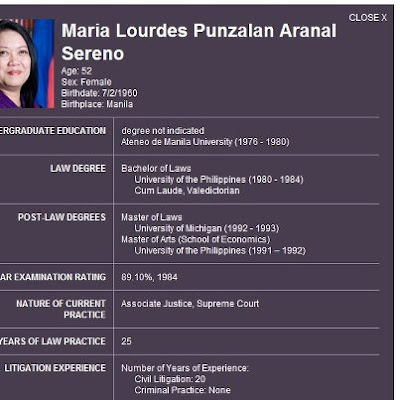