* This is my article today in the online magazine,
http://www.thelobbyist.biz/perspectives/less-gorvernment/1340-rain-rain-everywhere
-------- 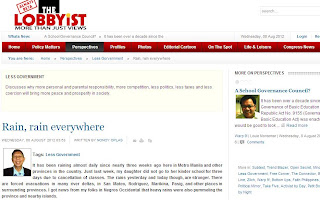 It has been raining almost daily since nearly three weeks ago here in Metro Manila and other provinces in the country. Just last week, my daughter did not go to her kinder school for three days due to cancellation of classes. The rains yesterday and today though, are stronger. There are forced evacuations in many river deltas, in San Mateo, Rodriguez, Marikina, Pasig, and other places in surrounding provinces. I got news from my folks in Negros Occidental that heavy rains were also pummeling the province and nearby islands.

Here is the latest graphics of sea surface temperature (SST) anomaly (deviation from normal temperature) as of August 06, 2012. The Philippines, from north to south, from east to west, has between 0.5 to 1.5 C colder than normal. The colder than normal weather and SST is also experienced in Malaysia, Singapore, Indonesia, southern Thailand and Vietnam, northern Australia.

El Nino has actually returned, since last month, after nearly two years of La Nina and cooling. This El Nino-La Nina natural cycles occur every 3-4 years on average, although in global cooling period, La Nina are longer by several months than El Nino phases. But from the above image, Nino region 3.4 (central tropical Pacific) seems to have slumped back into cooling, especially the northern part.

Bob Tisdale showed the long term condition in Nino 3.4, the main indicator of whether the planet is entering an El Nino or La Nina phase. Bob did not put a linear trend here, but the trend is either a flat lining, or a decline in SST temperature anomaly there. 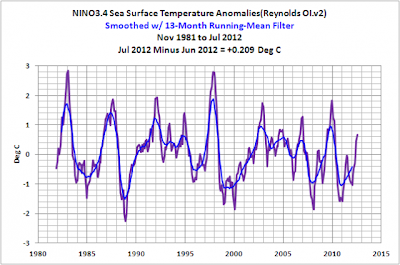 Meanwhile, some warming religionists keep painting a bleak future scenario of the planet. Here is one example: a projection in 1972 that the Arctic will be ice-free by 2000 or 12 years ago. I put beside the news story, the most recent charts and satellite photos of the Arctic ice, as of two or three days ago. 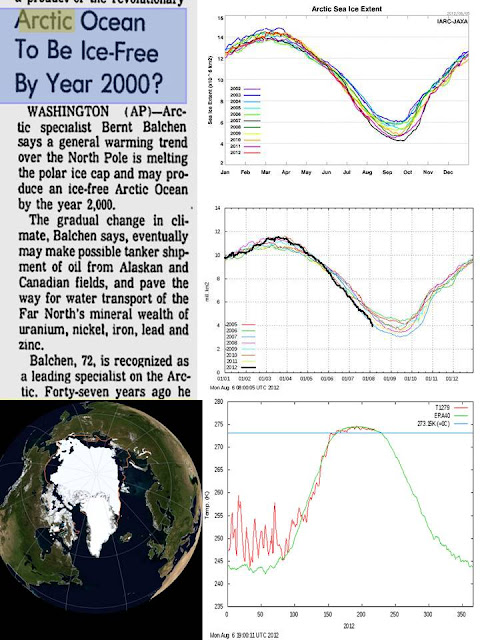 2. Graphs and satellite photos, from http://wattsupwiththat.com/reference-pages/sea-ice-page/

In particular: from top right:

So those people who keep saying that “polar ice are melting at alarming rate” or “ice-free Arctic” or “ice free Antarctica” in _____ years (the shorter the more alarming the better) either do not know what they are talking about, or simply fooling and deceiving us.

Back to flooding in the Philippines. The warmists should admit it -- the planet is not warming. In certain areas or certain times, the planet is plunging into deep cooling. More rains, more flood, are not indicators of global warming.

Problem is that climate fanatics have turned their craft into religion. Regardless of data showing otherwise, they simply believe, they simply have faith, on warming.

Now we wait how many died, how many were evacuated, how many millions worth of properties and crops were damaged. And man-made warming has nothing to do with it but it keeps being blamed.
--------

Meanwhile, the rains and flooding have not stopped yet until now, evening of August 08. This afternoon, I entertained my two young daughters when I had fun in a flood in front of our gate :-) 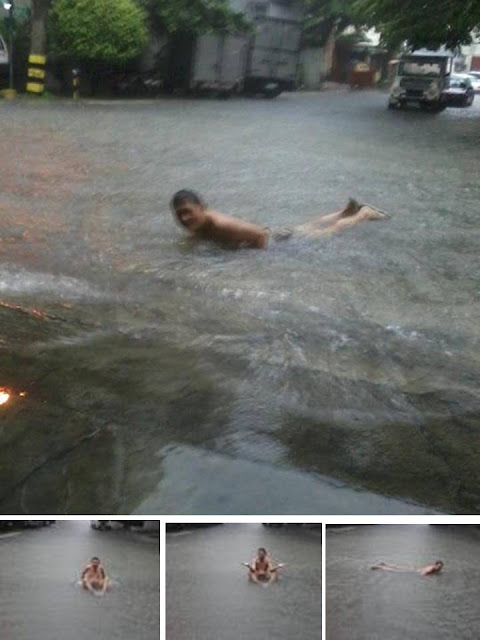