* This is my article yesterday in TV5's news portal,
http://www.interaksyon.com/business/40229/fat-free-economics-flooding-and-global-cooling
---------- 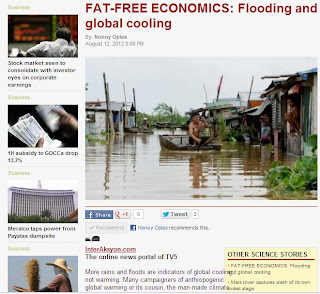 More rains and floods are indicators of global cooling, not warming. Many campaigners of anthropogenic global warming or its cousin, the man-made climate change, argue however that less rain and more drought is an indicator of AGW, even as they claim that more rain and flooding is also an indicator of AGW.

It is irrational to argue that less rain and more rain, less flood and more flood, less typhoon and more typhoon, less snow and more snow, are all indicators of AGW and CC. The argument given by the AGW campaigners is that with a warming world, there is more drought and less rain. Fine. But they later added that a warming planet causes more water evaporation from the oceans, in turn forming more rain clouds that cause heavy rains.

Before probing deeper into the inconsistency and dishonesty of the above claims, let us briefly review the flooding that hit Metro Manila and many other provinces of the country early this week. Interaksyon.com reported that more than 540,000 families or more than two million people have been affected and some 60 people have died of drowning, landslides and related catastrophe.

Below are two charts of the sea surface temperature or SST anomaly, a “deviation from the normal” temperature, as of this week (upper image) and last week (lower image). The Philippines as of August 9, 2012 had a temperature anomaly or divergence of between -0.5 and -1.5 degrees centigrade, meaning colder than normal. This weather pattern also affected many Northeast and Southeast Asian countries, down to northern Australia. El Nino has actually resumed since around June this year after almost two years of La Nina, yet many parts of the Pacific Ocean still have colder than normal conditions.

The lower image shows SST anomaly from another source, as of August 1, 2012 or last week. The Philippines had between 0.5 and 1.0 degrees centigrade colder than normal temperature that time, especially the northern and eastern parts of Luzon. A big part of the Indian Ocean had between zero and 1.0 degree centigrade warmer than normal temperature, or the average SST from 1971 to 2000. 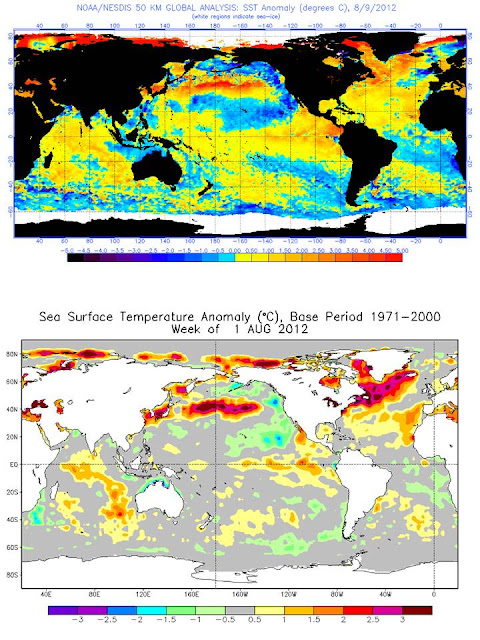 Determining whether the planet is entering a La Nina or El Nino condition is based on the SST anomaly in Pacific Ocean’s Nino region 3.4 shown in upper left photo below. It comprises the biggest and central part of the Pacific Ocean, which comprises about a third of the planet’s total surface area, and larger than all landmass and continents combined.

Images from upper right clockwise represent the SST anomaly for Nino 3.4 over (a) last five years, (b) last 12 years, and (c) last 62 years. It is clear here that there is no such thing as “unprecedented warming” in the world’s biggest ocean, that it was a natural cycle of warming-cooling-warming-cooling, each phase lasting for a few years. So the statement of AGW campaigners like the UN Intergovernmental Panel on Climate Change, Al Gore, World Wildlife Fund, Greenpeace and many other groups and institutions, of “unprecedented warming” or “unequivocal warming” is simply not true, that they have been dishonest to the public. 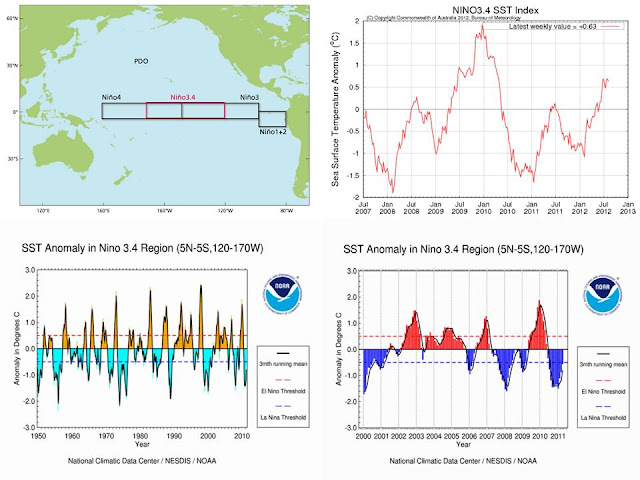 Let us review air temperature, particularly the troposphere, the lowest portion of Earth’s atmosphere, and the stratosphere, the second layer after the troposphere. From satellite data interpreted separately by the University of Alabama in Huntsville and the Remote Sensing System, global troposphere temperature anomaly, or divergence from the normal temperature, was generally rising from 1979 when satellite data was first gathered. But if one will plot a linear trend starting from around 2000 up to the present, a flat-lining, if not decline in global temperature can be observed.

In the stratosphere though, the trend over the past few decades has been a temperature fall or global cooling at the second layer of the planet’s atmosphere. 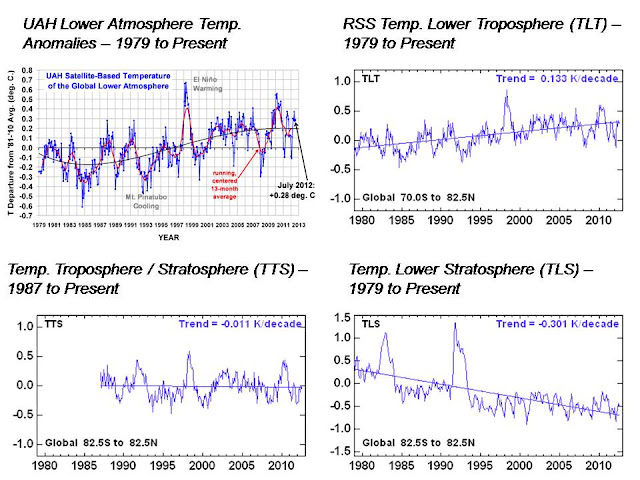 In combined land surface plus sea surface temperature anomalies as gathered by HadCRUT data sets, the trend from 2000 to the present is flat, or slightly declining or cooling. 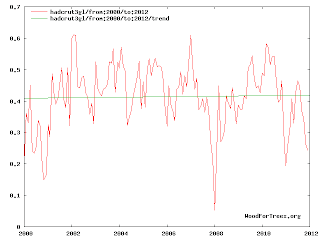 Finally, let us compare the climate projections by the UN IPCC vis-a-vis actual temperature anomaly. Below, the upper photo shows a huge divergence between the two as the global air temperature has started to flatten, then descend in the middle of the last decade.

Lower photo shows a disconnect or absence of “causality” between carbon dioxide emission and global air temperature. As the former keeps rising to nearly 400 parts per million, the global air temperature from January 2002 to July 2012 was declining or cooling by around 0.03 degrees centigrade per decade. 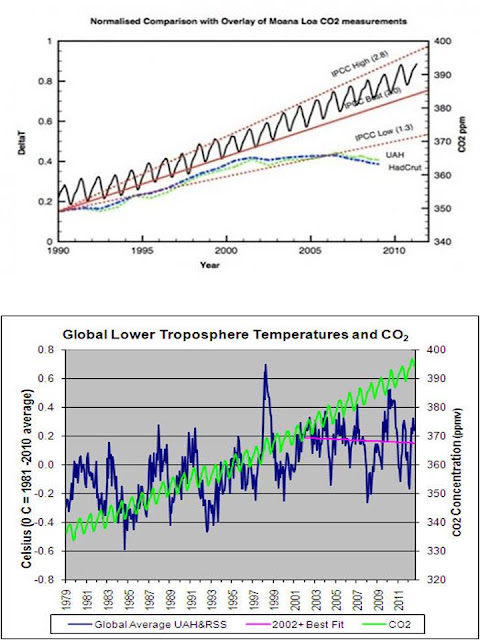 Thus, there is dishonesty on the part of the UN and its climate and environmental bodies – IPCC, FCCC, UNEP, WMO, among the major ones, along with Al Gore, the big environmental NGOs like WWF and Greenpeace.

Before, they were telling the public to prepare for more drought and rising ocean due to the “alarming ice melt/loss” in both the Arctic, Greenland and Antarctica. Recently they reversed gear and now say that the public should prepare for more rains. There are many negative implications for the lousy analysis and projections by the warming camp. Among them are the following:

- One, creation of carbon taxes, stricter environmental and energy regulations regarding the use and consumption of fossil fuel and other carbon-emitting vehicles and power plants;

- Two, creation of many new climate bureaucracies. Here in the Philippines, among those newly created bodies purportedly to “fight climate change” aside from the Department of Environment and Natural Resources are the Climate Change Commission, National Renewable Energy Board, NDRRMC, and many other climate offices and bureaucracies at the local government levels;

- Three, contracting billions of dollars of climate and energy loans from the World Bank and the Asian Development Bank to help “save the planet.” At a time when our public debt is already at a high level, about 40 percent of GDP, expanding the government debt for some phony and unnecessary program is bad public policy.

The government should instead use more money to dredge creeks, rivers and lakes, as we expect more rains and more floods, in fact worse than what we have experienced so far. Global warming and cooling phases last for several decades, not just a few years. Let the strong flood and rain water move faster to the ocean so that flooding of many streets and residential areas in the country will be significantly controlled and minimized.

Lastly, let us build more dams. Projections like lack of water that can trigger future conflict between and among countries and people are unrealistic. What we experience is too much water with more frequent heavy rains. Government need not build more dams. Let private corporations, real estate developers build more dams, small to medium size ones to minimize dislodging upland dwellers and cultural minorities. More dams will impound more floodwater while ensuring steady flow of water for the public, from ordinary households to rice farmers needing more irrigation, or small hydro power plants.

Global cooling will spawn more flooding, possibly more severe and more catastrophic than what we have experienced so far. Let climate realism reverse the damage and uncover the intellectual dishonesty of climate alarmist groups.
----------

again, why focus ONLY on the past 40 years? this is CLIMATE SCIENCE.

Nino 3.4 data above stretches back to past 62 years; satellite data of air temp started only in 1979.