* This is my article last Saturday in the online magazine,
http://www.thelobbyist.biz/perspectives/less-gorvernment/1345-oil-prices-and-taxes
---------

Local oil prices have significantly jumped the past few days by about P3 per liter. This reflected the upward movement of oil prices in the world market over the past few weeks. As usual, the left-leaning groups raised howl and criticized the oil companies for their “greed” and called on the government to have another round of tax hikes on oil or other products and services.

Last July 11, 2012, I attended the “Platts Forum on Oil, Coal and LNG” at Edsa Shangrila Hotel. Among the speakers there was Ms. Zenaida Monzada of the Department of Energy. Below are among the slide presentations she gave in the said forum.

Taxes that contribute to the higher retail prices of petroleum products are (a) excise tax, P4.35 per liter for gasoline, P3.67 per liter for jet fuel, P1.63 per liter for diesel, and (b) value added tax (VAT) 12 percent. This means that for the P54 per liter unleaded gasoline, about P10 of it goes to excise tax and VAT alone. Or the government is directly accountable for expensive oil by about P10 per liter. There are other indirect taxes of course, like corporate income tax, documentary stamp tax, real property tax, etc. of the oil companies, trucking and gas stations.

The lower chart shows that the Pesos per liter retail price has moved along with the world crude oil price, from 1984 onwards. 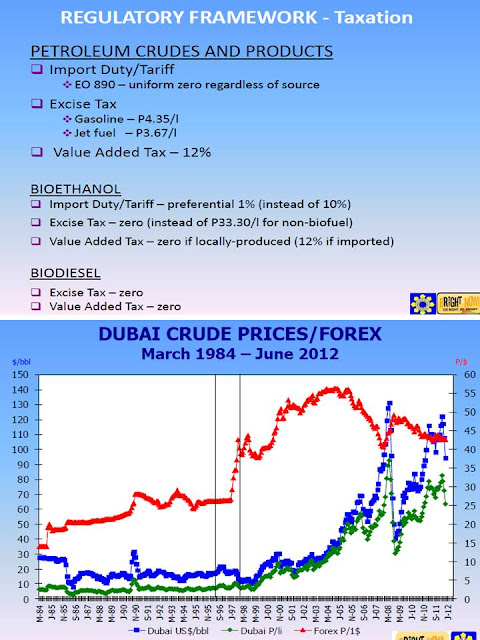 Below, the same story is shown. From 1999 to June 2012, local gasoline and diesel prices have moved generally in steep with international crude and refined product prices. And world oil prices are dictated by the governments of the major oil exporting countries, both OPEC and non-OPEC member countries.

The conspiracy theory therefore, of oil companies dictating local oil prices to satisfy their greed is standing on a hollow ground. 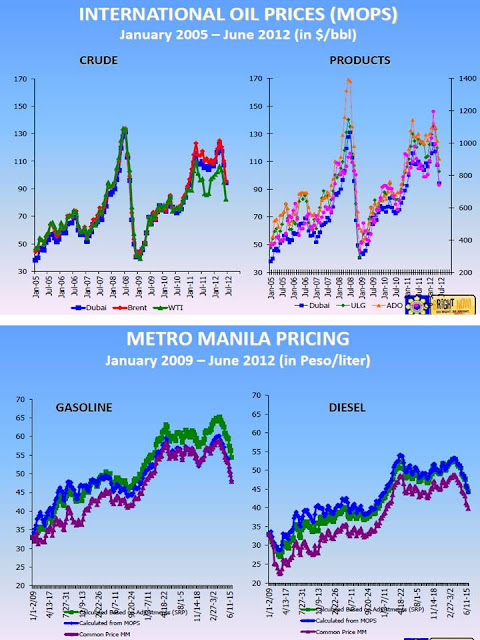 Below, “prevailing prices” refer to early July 2012 prices. Prices across various oil dealers and retailers are generally similar, with minor price differential that can be attributed to other business costs like land lease or rent, and/or varying profit ratio.

The lower table shows comparative prices across major capital cities, converted into Pesos per liter. Philippine oil prices are not among the highest in the region. The most proximate explanation would be that those countries that have higher oil prices than us have higher taxes and fees, direct and indirect, that are slapped on oil products and oil producers and retailers. 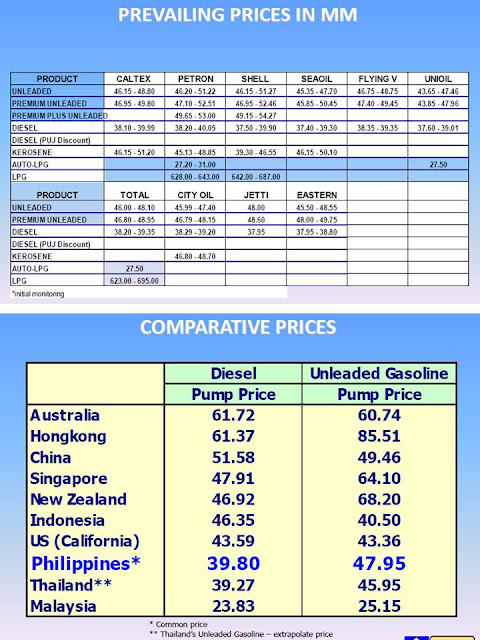 The bottomline is that contrary to common public perception that the oil companies are the main instigator of oil price hikes, it is not. It is more due to the (a) governments of oil exporting countries like those in OPEN-member countries that set the price of crude oil, and (b) governments of net oil importing countries like the Philippines, for the various taxes and fees imposed both on the oil products and the companies that import, refine, transport and retail oil products.

Repeated calls to re-regulate if not nationalize the local oil industry are misguided and wrong. Instead of having more government involvement and intervention in local oil price setting, there should instead be lesser government taxes and involvement. The excise tax on oil products should in fact be abolished, instead of raising it as proposed by some sectors.
----------