* This is my article today in the online magazine,
http://www.thelobbyist.biz/perspectives/less-gorvernment/1342-on-rule-of-law-and-government-failure
---------- 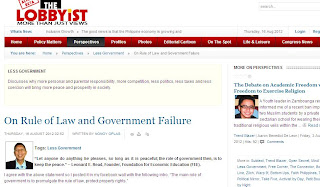 “Let anyone do anything he pleases, so long as it is peaceful; the role of government then, is to keep the peace.” – Leonard E. Read, Founder, Foundation for Economic Education (FEE).

I agree with the above statement so I posted it in my facebook wall with the following intro, “The main role of government is to promulgate the rule of law, protect property rights.”

My friend was simply advocating a socialist society where the main function of the government is to have forced equality among the people in society. And this is something that I do not agree, that is why I stopped being a Marxist and a socialist since the 90s.

Why allow and respect private property rights and not state or collective property ownership? Many people work hard abroad, sacrifice not seeing their family for several years, or they may be working here but they work long hours. After some sufficient savings, they buy a house and lot, and/or a farm, or a private resort. And government will come in to confiscate any “excess” property in this case, to be given away to those who have nothing, without asking carefully why some people have nothing. That is not right.

One may be rich because of inheritance from hard working parents, or due to own hard work. then some criminals will come in to steal the car and other properties, to kidnap the kids for ransom, to abduct and rape a sister or daughter, or murder a friend or other family member for some flimsy reason. And government cannot solve many of such crimes because it is busy looking around who have improved their lives and how to confiscate more of their income and properties for redistribution first to its wide and expanded bureaucracies, then to those who have few or nothing.

Many developed countries like the US, Canada, Japan, and many European economies are actually limping from too much forced redistribution, forced equality and expensive welfare programs. The huge public debt, both actual and contingent debt, is clear proof of the inefficiency of this policy. Many of the social programs are simply driven by envy. One is a demon because he is very efficient and hardworking and has become very rich, so government will get more and more from that demon.

But the redeeming action why those rich economies still do not collapse yet, is their promulgation of the rule of law. People pay high premium for the peace and order and low crime in their communities, killers and thieves are more easily apprehended, contracts are respected, policies are predictable and generally stable. Many businessmen and job creators still prefer this arrangement despite the huge and multiple taxes and fees slapped on their businesses, personal income and property ownership.

On another note, another friend way back in UP in the mid-80s, Maricris Valte, recently made this observation:


“The tragedy of the urban poor, particularly informal settlers, is that the poverty they confront invites repulsion rather than compassion. Much of society sees them as thieves, living off the sweat and property of others…. Sure, there are low-lifes and criminals in these informal settlements, but you have worse criminals driving around in armored vehicles. living in gated subdivisions and occupying powerful positions. The fact of informal settlement is an issue of social inequality. The proliferation of informal settlements is also a result of politicians cultivating electoral bases and making money out of deprivation. Government response must address both, if we want a sustainable solution. Oh, and that solution should include higher property taxes on idle private lands and residential properties that exceed 200 square meters. When a household of three occupies a house good for 12, that's criminal.”

I commented that the above observation that we have "worse criminals driving around in armored vehicles. living in gated subdivisions and occupying powerful positions" is one clear example of government failure. When the criminals that the government should go after and enforce the rule of law are sitting in government itself.

About the informal settlers or “squatters”, they should live in medium or high rise condos to save land space. The sky is the limit for vertical structures. So contrary to Maricris’ proposal, the government should instead drastically cut if not abolish real property tax (RPT) for condos, at least for low-cost and small unit condos, instead of raising that tax. All government taxes and regulatory fees are ultimately passed on to consumers and buyers, and this makes the prices of houses, medicines, etc. go higher and less affordable to the poor.

One solution by the government is that its own agency itself, the National Housing Authority (NHA) will build housing for the poor. One problem with this is that with the current bad governance culture, the tendency of the government implementing agencies is to jack up project cost instead of reducing it, so that there is some commission for them. The alternative scheme is to invite private developers in a competitive bidding. Connivance between the winning bidders and the government implementing agencies will remain a possibility, so the process of bidding should be made as transparently as possible.

But government taxes like the RPT by LGUs should be drastically cut if not abolished, for low-cost condo projects and condo units. When the poor move out as informal settlers and become formal settlers with clear private property rights to their house, that takes off certain spending program off the back of government and hence, reduces the need for more revenues.

Helping people to become self-reliant, to depend less on government welfare, is one offshoot of promulgating the rule of law and protecting property rights.
---------