I saw this facebook wall posting by a health economist and staunch pro-RH ideologue, Oscar Picazo:


WE ARE ALL IN THIS TOGETHER - I have seen a few FB posts argue that sex and reproduction are PERSONAL matters. Well, the act itself is, but the fruits of that act are very SOCIAL matters:

(a) Unwanted children become a burden not only to the couples who produce them but to society as a whole. I will be paying more in taxes just to educate your excess children in public schools.

(b) The congestion effects of excess fertility are serious, as seen in urban traffic, environmental degradation, sprawling informal settlements, etc. These negative things affect me, not only the couples who over-produced.

(c) The crime and other social pathologies engendered by rampaging population and poverty are real, and affect everybody.

So stop burdening me with your excess fertility. I would rather that the government increase my taxes now so I can help purchase contraceptives for poor people, rather than pay much, much higher taxes in the future for the needs of a burgeoning population. Simple, straight logic.

I replied that the "unwanted or excess children" that he despises are the family drivers, yayas, helpers, gardeners, carpenters of many rich and middle class people who like him, despise such excess population. These "unwanted children" are also the taxi drivers, bus drivers, construction workers, security guards, office janitors and messengers, salon beauticians, nurses and caregivers, that people hire because they are useful.

People are assets, not liabilities. The liabilities that people dislike -- thieves and plunderers, killers and murderers, rapists and kidnappers, other criminals both from poor and rich families, both in private and government sectors -- that is the role of government to catch and control. Promulgate the rule of law and stop coddling corrupt people and law violators in government itself.

Many rich countries now with ageing population are benefitting from our "surplus population". They prefer to get Filipino caregivers, nurses and other health professionals, rather than have more robots or their own government bureaucrats taking care many of their sick and old people.

If they do not want to pay additional taxes for public education of those "unwanted children", then they can demand that government subsidy for education should be until elementary and/or secondary levels only, privatize all state universities and colleges. Or limit subsidy to science high schools only.

Last Thursday, Oscar also posted this image below with a note,


I wish I could draw cartoons, but since I can't, I did matrices instead. Let's see if this works... 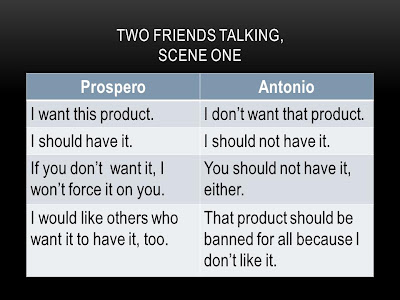 I replied in his wall with this:

Individual liberty was never part of this rather boring and parochial church vs state debate.

He did not reply to it. This church vs state debate on population control is lousy. I'm no fan of either church or state bleeding heart arguments on "family planning." Why should church leaders or government politicians and bureaucrats intrude into the bedroom or the sala of households?

If the poor will work hard, become fishball or barbeque or buko vendors, or open a barber shop or carinderia, government should step out with lots of business permits, taxes and bureaucracies. Just one or two simple registration should be enough, not five or ten or more (barangay permit, health and sanitation permit, electrical permit, Mayor's permit, DTI permit, BIR permit,...). The poor on their own, with assistance from various civil society and charity organizations, should be able to lift themselves from poverty. Those who resort to stealing and other forms of criminal activities to feed their family, whether rich or poor, that is where government with its coercive powers and functions, should come in.

In my previous debate with Oscar also in his facebook wall, I suggested that a compromise formula for this never-ending population control issue, is that if government is so serious in creating a new subsidy program like RH services, government should also terminate or drastically cut existing subsidy program somewhere else. This way, (a) fiscal bleeding due to endless over-spending and over-borrowing will be minimized, and (b) government failure elsewhere is recognized and terminated, before another government experiment will be started.

I am glad that Oscar agreed to that proposal. But he never picked on that idea after. Instead, he continued with the above illogical arguments.
---------

Update: I posted this blog post in his wall and Oscar replied, here is our new debate:


Oscar Picazo People become liabilities if they become beggars. They are a burden to the entire society. You speak like a true anti-RH.

Oscar Picazo And on a personal level, Nonoy, I have sent - and continue to send - children not my own, and not related to me (one in Payatas), to school. I don't know whether you have done this yourself. So stop being holier-than-thou.

The debate is on population -- should government control it or not? Are excess children a burden or not? -- and not whether one sends poor children to school or not. I also help other poor people but it's out of the main issue or debate.

Oscar Picazo I am speaking of future pregnancies that the RH Bill could avert, not the current population stock which the Bill could no longer do anything about. You seem to have a time inconsistency problem, like Senator Sotto (wink, wink). You should read physicist Stephen Hawking's A Brief History of Time, which explains the unidirectional "arrow of time".

Nonoy Oplas The RH or similar bills has/have been proposed many years or decades ago. If there was an RH and government population law many years ago, some of the current security guards, messengers, drivers of PIDS or other offices would not have been born. You also cannot focus on the issue, drag other names or digressions like whether one supports a poor child or not. Stick to the issue and defend: excess children are a burden to society. Stick to it.

Oscar Picazo Ha ha ha, Nonoy, you do suffer from a time-inconsistency problem. Read up on Nobel Economics winners, Kydland and Prescott, who wrote on the matter w.r.t. inflation targetting, but I doubt if you could go through the arcane economics.

Nonoy Oplas See? You posted above that excess children are a burden, that crime and social pathologies are a result of rampaging population. When you are pressed to stick to it and defend it, you reply instead with mentioning Hawkings, inflation targetting. Just defend your earlier assertions, or it is indefensible now?

Nonoy Oplas From History of time to inflation targeting to critical thinking. What's next Oscar, non-believers of your arguments should also read literatures on game theory, chaos theory, Keynesian theory, Einstein's theory? That is a lousy alibi for "space is limited so I cannot explain it" alibi.
---------