Last week, August 22, I was one of five panel speakers who talked on the subject, "Celebrities Turned Politicians" organized by the UP Economics Towards Consciousness (UP ETC) at the UPSE. I was the only non-academic speaker there. The four  other speakers were Dr. Maria Fe Mendoza of UP National College of Public Administration and Governance (NCPAG), Dr. Jean Franco of UP College of Social Sciences and Philosophy (CSSP), Prof. Jane Vinculado of UP College of Mass Communications (CMC), and Mr. Noel del Castillo of Miriam College. The forum moderator was Kapuntong Edge of UP's radio station, DZUP 1602. My co-speakers were very articulate in their respective fields. Unless I felt that there was something that I could add, or unless I was explicitly asked a question by the moderator, I did not speak much. I learned more listening to the four other speakers than speaking.

Well, I was invited precisely to provide a different perspective -- that of less government philosophy in topics like this. So when I was asked by Kapuntong Edge what I think about the theme, I said that we are discussing two concepts here: celebrities and politicians. I agree with Prof. Vinculado's definition that celebrities refer not only to showbiz actors, actresses, singers and dancers. They also include boxers like Manny Pacquiao, famous basketball stars and other athletes, radio and tv broadcasters, news anchors, tv public affairs program phosts, others who became instant celebrities for whatever reason/s.

The second definition is about politicians, people who aspire to be the administrators and legislators of the state and seeking the voters' mandate to get such powers and privileges. The state is force and coercion. It has the power to create various regulations, taxation, restrictions and prohibitions, to manage our lives, work and communities.

So many people, not only celebrities, but also lawyers and other professionals, clowns and idiots, aspire to become the administrators and legislators of the state, to have such power to enact new regulations or implement existing regulations and taxation. 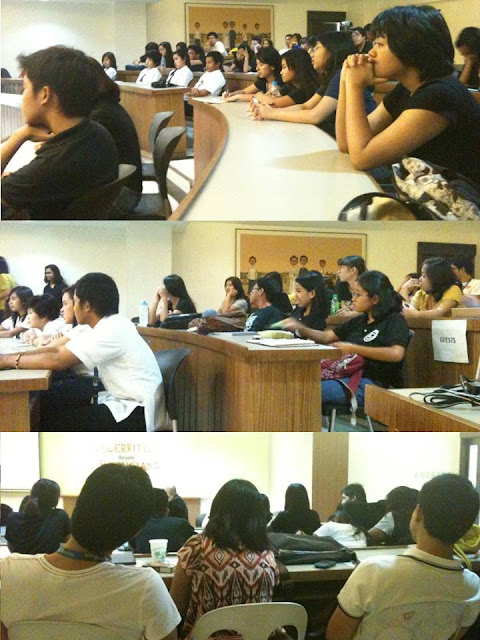 Other topics that were discussed or mentioned were: (1) Public service as public trust, (2) the role of political parties, (3) the party-list system, (4) possible restrictions to those aspiring to become politicians, (5) voter education, many others.

On public service, I said that it is wrong to limit public service only to those who are in government because real public service is actually being done by those in the private sector. If one has to bring a family member to a hospital late at night very quickly and he/she has no car, taxi or jeepney or tricycle drivers can do that very important public service job and yet these people do not receive or rely on tax money to do such task. Notice also that even ordinary vendors of clothes, shoes, cell phone accessories and so on, do not take lunch break and close their shop. They serve their customers anytime so long as their shop is open. Whereas many government offices and personnel, national and local, take prolonged lunch break even if they are supposed to provide crucial service delivery to the public.

I mentioned the case of my friend who was accidentally bitten in the leg by one of their two dogs who fought, this was about three or four years ago. I brought him to Makati City Hall as treatment of animal bites were transferred there from the city-owned Ospital ng Makati. We arrived at city hall around 11:45 am, the doctor and his staff already left for a lunch break and we were asked to come back by 1pm. For such crucial service as treating patients who may have deadly virus in the body if the dog (or cat, rat, etc.) has rabies, they take an extended lunch break whereas those ordinary vendors who provide not-so-essential services do not take lunch breaks. 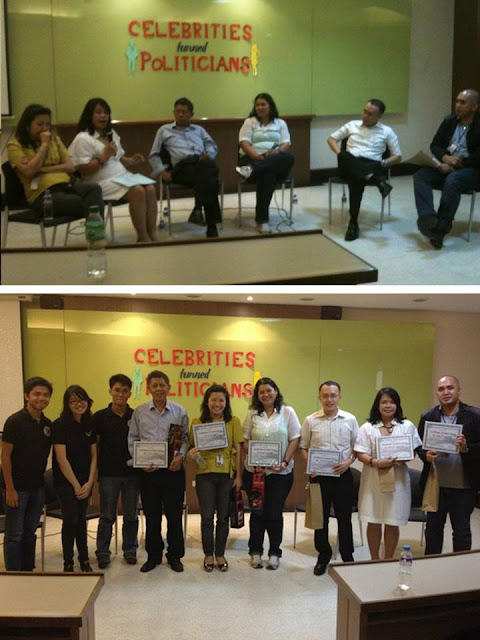 Our group photo above after the forum. From left: Three officers of ETC to my left, Mel Lorenzo Acad beside me; then Jean Franco, Jane Vinculado, Noel del Castillo, Maria Fe Mendoza, Kapuntong Edge. UP ETC gave us a modest but nice recognition plaque plus a bottle of mild wine.

My concluding notes there before the program ended:

1. Reiterating that the state is force and coercion, and so many people, celebrities or not, idiots and clowns, want to become politicians and become the administrators and legislators of the state. There is nothing special, nothing particularly wrong that many celebrities are becoming politicians.

2. What we need is to shrink government, to reduce the number of political positions, appointed or elected, reduce the taxation, regulations and prohibitions by the government, national or local, that government should focus on its important function in promulgating the rule of law, to protect the citizens' private property rights and their right to life free from aggression and harassment by bullies. 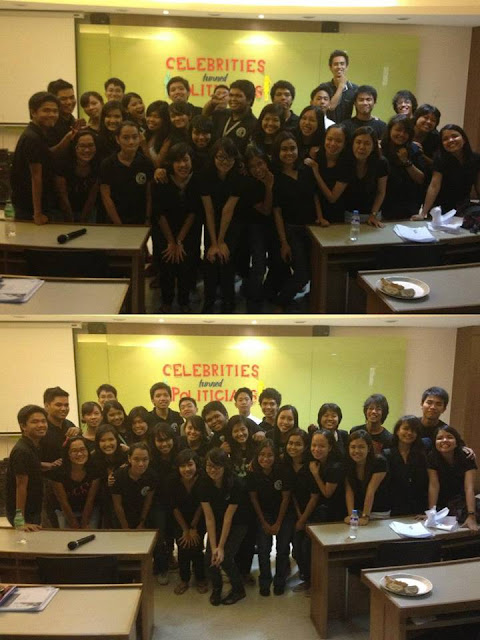 Above, the officers and members of UP ETC. Thanks guys for a good public forum. I am proud of my former organization when I was still an undergrad student at UPSE in the 80s.