This story was reported by Kicker Daily News last December. It's about some traffic enforcers in Ortigas Center, Mandaluyong City, Metro Manila, who extort money from hapless motorists. Vehicles going to Edsa should be in the middle to right lane. The traffic officers would flag down motorists in the middle lane and insist that they were using the left lane and hence, should be penalized for traffic violation. It is time consuming to argue with these officers, and even more time consuming to redeem one's driver's license at their office + pay the penalty. So they extort money and they will let go of the motorists. 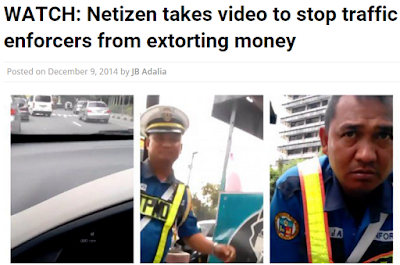 The motorist who posted originally in facebook, David Kilpatrick, has been extorted previously, P500. The practice is repeated, so one day he took video of the two officers, shown above. The one directly facing the camera is JA Cruz, Traffic and Parking Management Office (TPMO) #276. His buddy's name was not captured by the camera. 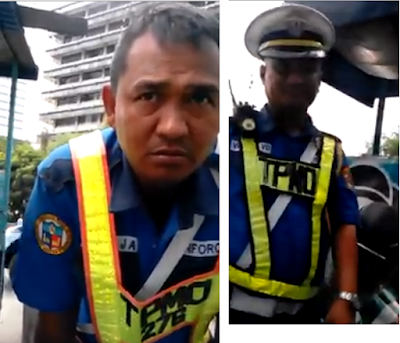 After their faces have been reported in media, one may expect that these guys may have been suspended or sacked already as their acts would negatively affect TPMO Mandaluyong Pasig City. This did not happen.

Today, a friend way back in Congress, Jojo Menorca, posted and positively identified these two officers who flagged down his daughter two weeks ago for the same accusation against Kilpatrick, and tried to extort P2,000 from her.

Jojo wrote (posting this with his permission):


Look at how they cover their NAMECLOTH with accessories.

Many government personnel especially in local governments have acquired that extortionist culture. Here's what they do: they create many Nos, prohibitions and restrictions on the roads -- No left turn and No right turn on red, No U-turn here, No Parking or Waiting there, No Loading here, No Unloading there, etc. Sometimes the left or U-turn slots are far away or in traffic-congested areas, enough to cause inconvenience to motorists. Some drivers who want to avoid getting stuck in heavy traffic try their luck and take the nearest open intersection, and that's where the "public servant" traffic officers come to harass them, impose fines and penalties + deliberate time consuming process to redeem the driver's license. Motorists will be pressured to pay the extortion that they demand.

As government expands, opportunities for extortion also expand. Hence, the need to stop further and endless expansion of the government, local and national.
------------

Traffic enforcers have many tricks up their sleeve. My friend was apprehended by one of the blue boys today. The story was that my friend was confused by the traffic enforcer's signal to cross the intersection. The traffic light was on red but enforcers were letting cars through probably to ease traffic; two cars turned left before my friend's turn at the middle lane. The enforcer waved his towel as a gesture to move, but as the driver went straight, enforcer signaled to pull over. My friend explained the confusion, and traffic enforcer admitted that he waved the towel "because he was wiping his sweat". Still, the violation was disobeying traffic signs. Has anybody encountered this before?

Thanks for this comment. That may be a new trick. In Buendia near Roxas Blvd intersection going to CCP complex, there are 2 or 3 lanes for U-turns but 1 of which can be used also to go straight. If you take that lane, Pasay traffic officers waiting under the flyover will apprehend you. It's a "grey" lane, the "violation" is not clear, but the penalty and harassment is very clear.