Although I have mentioned in various postings here some of the liberty- and free market-oriented think tanks in Asia and other parts of the world, I have not discussed them exclusively. So I will start another series on "Think tanks for liberty."

I will start with the Institute for Democracy and Economic Affairs (IDEAS) in Kuala Lumpur, Malaysia. I chose it not only because its Chief Executive, Mr. Wan Saiful Wan Jan, is a good friend of mine, but mainly because it recently won recognition as "one of the best new think tanks in the world."

Commenting about this achievement, Datuk Seri Azman Ujang, a member of IDEAS Advisory Board, says: “We in IDEAS are humbled by this recognition while at the same time mindful of the challenging tasks ahead in helping to make a positive difference in nation building. On behalf of the Advisory Board, I would like to thank the IDEAS team under the dynamic leadership of CEO Wan Saiful Wan Jan for making it to international ranking within just a short one year of existence.“

Wan Mohd Firdaus Fuaad, Founding Director of IDEAS, says: “We will be one year old on 8 February 2011 and we will celebrating it with an event at Memorial Tunku Abdul Rahman, Kuala Lumpur. This achievement is a brilliant culmination of one year of hard work to set up and establish IDEAS as an independent free market think tank in Malaysia. We will continue working hard to achieve even more. Our ambition for 2011 is to help the public understand the meaning of economic liberalisation, so that the New Economic Model and the Economic Transformation Programme mooted by Dato’ Sri Najib can achieve their full potentials.” 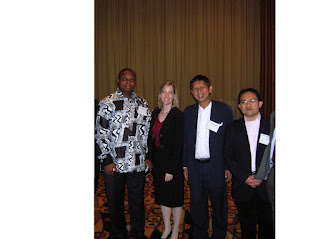 My picture with Wan, rightmost, in April 2008 during the Atlas Liberty Forum in Atlanta, Georgia, USA. The two others here are Mr. Franklin Cudjoe, Founder and Director of Imani Center for Policy and Education in Accra, Ghana, and Ms. Colleen Dyble, previously with Atlas.

Imani itself was also recognized as one of the "top 25 innovative policy think tanks in the world" in the same survey.

Before moving back to KL to join and head IDEAS, Wan worked in London for about 18 years for some liberal think tanks and institutes. Then he founded Waubebas, the predecessor of IDEAS.

I am very proud to befriend young liberty-minded Asians like Wan. Pursuing individual freedom and free market in Malaysia, our neighbor in South East Asia, is another daunting task. But dreamers are not scared of the big tasks ahead. They dream big, that's why.
Posted by Bienvenido Oplas Jr at 8:18 PM