For many of us in developing countries, it is unthinkable that public healthcare in rich countries can result in more malnutrition among the patients, especially the senior citizens.

But a WSJ article, Postcard from the NHS, reported the following to be happening in UK hospitals:

In 2007, 239 patients died of malnutrition in British hospitals, the latest year for which figures are available. A wag might say it must be the English cuisine. But the real roots of this tragedy lie in Britain’s government-run medical system....

The problem is not a lack of food. Hospital malnutrition mostly affects the elderly or otherwise frail, who often need individualized mealtime assistance. Spoon-feeding the elderly may not seem like the best use of a nurse’s time, but for some it may literally be a matter of life and death. Yet the constant scarcities created by government medicine, along with the never-ending drive to trim costs, has led the National Health Service to give nurses additional responsibilities and powers in recent years. Inevitably, this leaves them with less time to make sure patients are getting fed.

I have read a few months ago the plan of the NHS to decentralize healthcare provision in UK. That is, move a number of healthcare functions from the central government to local government units.

The government will not confiscate too much money from the people in the form of high taxes, the people keep more of their income and savings, they get their own private health insurance. If they are not satisfied with their current provider, or someone else will offer a better healthcare package, people can buy a new health insurance there.

This competitive system of health provision will do away with less sensitive or lazy health professionals, do away with inefficient healthcare management system.

People from developing countries should watch such development in the healthcare system in many rich countries. The "free healthcare" system there is not mostly a "bed of roses."
----

Now I see these 5 different news reports from 4 different sources, of how far from "model" healthcare system the UK government has. Here they are.

Consider the British hospital trust that was the focus of a recently completed independent inquiry. According to U.K. media reports, the review found that at least 400 and as many as 1,200 patients died from 2005 to 2008 because of poor care by Mid Staffordshire National Health Service Foundation Trust, which operates two hospitals...

The report is filled with examples that should be the shame of the British health system. It documents patient deaths due to apparent cases of neglect and misdiagnoses, and says managers "stopped providing safe care because they were preoccupied with government targets and cutting costs." There are records of patients developing infections, going hungry and left sitting on toilets.

The inquiry also noted "serious departures from the standard of basic care which every patient is entitled to expect," abuses of elderly patients, and the too-common presence of unwashed patients and bedding "soiled with urine and feces for considerable periods of time." Other sanitation problems included the presence of blood, discarded needles and used dressings.

These problems shouldn't be unexpected. Last year, the media reported that up to 10,000 cancer patients were dying needlessly in the U.K. each year because their condition was diagnosed too late, according to research by the government's director of cancer services. Also in 2009, there were reports that the health secretary ordered a probe into "claims that patients are dying due to poor care in at least 27 hospitals around the country."


A YOUNG mum died after a series of blunders by doctors who failed to spot a six-inch long TOILET BRUSH HANDLE embedded in her buttock, an inquest was told today.
Cindy Corton, 35, was left with the bizarre injury after a drunken fall in a friend's bathroom in 2005 but "serious errors" by doctors then led to her death.

It was two years before Cindy, who was in constant pain, was able to convince doctors that the thin serrated plastic handle was stuck in the flesh of her bottom.

After two unsuccessful operations in 2007 the mother-of-one was in such agony that she agreed to undergo further surgery in June last year despite being told it could prove fatal.

Cindy of Sleaford, Lincs, spent more than ten hours in surgery at Nottingham's Queens Medical Centre but died from massive blood loss. Husband Peter, 61, said that when his wife first attended A&E at Lincoln County Hospital she was sent home with painkillers, despite showing them the wound on her bottom.

Four days later she was in such pain she went to Grantham Hospital and, although x-rays were taken, nothing was found. He told the inquest in Grantham: "She wasn't properly examined by the doctor at Lincoln. "At Grantham she wasn't examined properly again...

Cindy's husband, a construction manager, is now taking legal action against United Lincolnshire Hospitals Trust. He said after the hearing: "Ok she was drunk but they didn't take her seriously. She showed them the wound but they didn't do a proper examination.

"I think it was probably down to the hospitals trying to save money and doing things as cheaply as possible." He added: "Cindy got a very poor service from the NHS. I'm sure she would have got better treatment in foreign countries."

Women in labour have been forced to wait while epidural equipment was borrowed from other hospitals, while other patients have been denied chest drains and radiology supplies, according to doctors at South London Healthcare Trust.

Minutes of a meeting between medical staff and the trust’s chief executive say “cash flow” problems at the trust which has a £50 million deficit, mean vital equipment is regularly not ordered.

A separate letter sent to managers of the trust, one of the largest in the country, says consultants have been misled into carrying out operations when it was not safe to go ahead because of bed shortages....

Minutes of a meeting of the medical staff committee of Princess Royal University Hospital in Bromley say managers acknowledged that “crude measures” introduced to cut spending had affected clinical supplies, meaning that stocks had run out when they were needed.

Doctors told managers “again and again” that consultants were unable to know that equipment was missing until the last item had been used, when their patient was already lying on the table, according to the minutes of June 16 meeting....

4. NHS reforms will cost £3bn and will not work: academic
The Telegraph
By Rebecca Smith, Medical Editor 8:00AM BST 17 Jul 2010 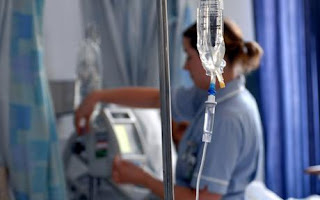 Reform of the NHS planned under the government's white paper will cost around £3bn without saving money or improving patient care, a leading academic has warned in the British Medical Journal.

"On the basis of the National Audit Office’s survey data, I estimate that the proposed NHS reorganisation will cost between £2bn and £3bn to implement, at a time of unprecedented financial austerity."

He said whether abolishing primary care trusts and strategic health authorities in order to set up GP consortia, which may number in the hundreds, will save any management costs remains to be seen.... 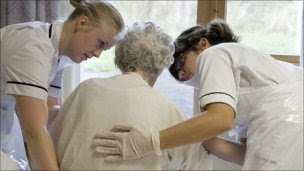 The NHS is failing to treat elderly patients in England with care, dignity and respect, an official report says.

The Health Service Ombudsman came to the conclusion after carrying out an in-depth review of 10 cases. The ombudsman, which deals with serious complaints against the NHS, said the patients - aged over 65 - suffered unnecessary pain, neglect and distress.

While the ombudsman's Care and Compassion report is only based on 10 cases, the ombudsman said they were far from isolated examples.

Of nearly 9,000 complaints made to the ombudsman last year, 18% were about the care of older people. In total, it accepted 226 cases for investigation - twice as many as for all the other age groups combined.

Several themes became clear from the ombudsman's analysis. Half the people featured did not consume adequate food or water during their time in hospital.

Some were left in soiled or dirty clothes. One woman told the ombudsman how her aunt was taken on a long journey to a care home by ambulance. She arrived strapped to a stretcher and soaked with urine, dressed in unfamiliar clothing held up by paper clips, accompanied by bags of dirty laundry, much of which was not her own.

Communication was also highlighted as a problem with one 82-year-old woman recalling how, on being discharged from hospital after minor surgery, she was frightened and unsure of how to get home. She asked the nurse to phone her daughter, but was told "this is not my job".

In another case, a cancer patient wanted to be discharged to die at home. When his daughter arrived to collect him, she found him sitting behind a closed curtain in distress.

He had been left for several hours in pain and desperate to go to the toilet. He was unable to ask for help because he was so dehydrated that he could not speak or swallow....

UK is a modern and rich country, so it is disorienting to hear or read this kind of stories. While there are many issues and factors that can explain why such things happen, I will only affirm my two central themes in this blog.

1. Where there is lack of competition, there is little incentive for the monopoly (or oligopoly) provider to improve its services and minimize cost, and

2. When something is provided for free or at a heavily subsidized price, demand will always be larger than supply. The result will be supply rationing and ultimately, a deterioration of the quality of service delivery.

H/t to Dan Mitchell blog for providing the links to the above reports.
-------

Noy, your posts on state-run health care probably provide the best empirical evidence of unintended consequences of government intervention I have seen. Thanks!

Thanks FFF. The news reports were already too graphic and sickening, I minimized my personal commentary above :-)