Climate alarmists and the “Earth savers“ are in for more disappointment. The planet has no fever, it is shivering with free-falling temperature, despite rising number of SUVs and coal power plants and other “dirty” energy sources.

Here is the latest data for the lower tropospheric temperature of the planet, average for the northern hemisphere (NH), the tropics and the southern hemisphere (SH). Graph and table below are from www.drroyspencer.com. Dr. Spencer is a climatologist at the University of Alabama in Huntsville (UAH), a former NASA scientist, a book author, and has been in the climate science for the past 40 years. 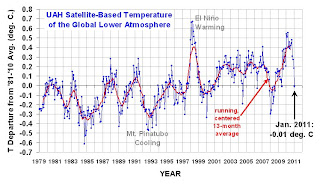 The temperature anomaly (or “deviation from the average temperature” the past 30 years, 1981 to 2010) as of last month was already negative, -0.01 C. Where is the warming? Is cooling also warming?

Too bad that truth is too far out from such simplistic explanation. The planet is simply cooling, period. It’s a simple climate cycle of warming-cooling-warming-cooling. Due to natural factors, internal (clouds, water vapor, sometimes volcanoes) and external (Sun, GCRs) factors. There was warming in the past, then cooling, then slight warming in the past century, then cooling now and the coming decades.

The current La Nina is severe in the tropics than in the NH and SH. Temperature anomaly, in Celsius, compared to average temperature from 1981-2010: 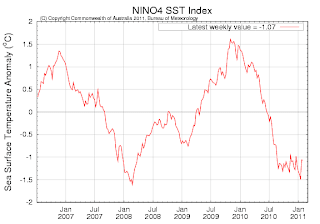 Of special interest for East Asia and west of Pacific Ocean like the Philippines, the temperature anomaly in equatorial Pacific region 4 (the region closest to East Asia) for the past five months or so has been between -1.0 to -1.5 C. Data as of January 30, 2011, data from Australia’s Bureau of Meteorology, http://www.bom.gov.au/climate/enso/indices.shtml.

PAGASA warned this week that the rainy season will extend until May this year. See one news report, Weather bureau warns of increasing calamities from rains. If this is the case, then this will be another “year without summer” or alternatively, “one year of rainy season” for the country, similar to what happened in 2008-09. By June, the regular rainy season will be back again in its annual, natural cycle.

What was unique about this conference was that it was in it's first year and there were several write my essay hundred people in attendance.