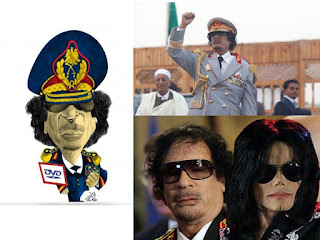 Libyan President Muammar Gadhafi (or "Gaddafi" in many other stories) will be 42 years in power this year. He might be the 2nd longest-staying dictator in the world next to Cuba's Fidel Castro. But unlike Castro, Gaddafi is known for colorful and sometimes, weird fashion. Well, weird looking for a leader of a state.

Majority if not all of the pictures here are from http://connect.in.com. Below are some collections of his fashion. 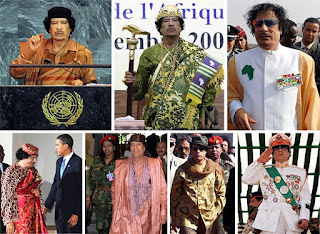 If we have bio-diversity, geo-diversity, cultural diversity, we can also have fashion diversity -- in one man. Well, he's been in power for the past 41 years, going 42 years this year. There is evolution in his sense of fashion.

Even assuming that his overall fashion taste changes every 10 years, then there should have been four general fashion themes in the past. 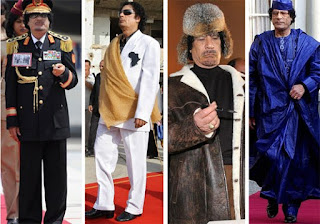 And more fashion, really eye-catching attires. From wardrobe to thick jackets to multi-decorated military official, the variety is far and wide.

Is he a state leader or a fashion leader? Seems that the quick answer is: both. 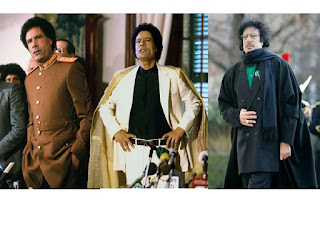 Then it just unfurled. Sometimes he appeared like a ramp model, or someone just strolling the high streets of London, Paris and New York, showing off latest design clothing. 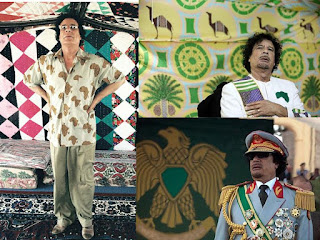 Notice that the background are sometimes tailored to the dress he's wearing for the day. 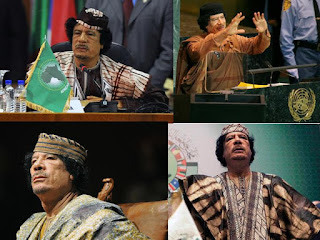 When he was at the UN general assembly, he should be catching attention a lot. Most diplomats and heads of state would be wearing the usual business attire. But it seems that he never wore that usual business clothing all those years?

Or maybe he thought that there could be an instant "cultural day" at the UN or other international gathering. 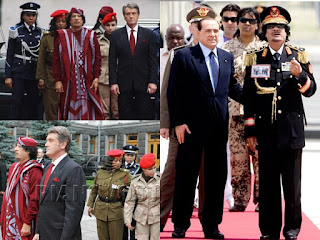 He could be marching here for a "Sergeant Pepper's Lonely Hearts Club Band" rock performance. But where are The Beatles? Or its reprise movie with The Bee Gees and Peter Frampton? :-)

Oh, I saw one cartoon of Gadhafi holding an electric guitar. I don't know where I saved that cartoon... 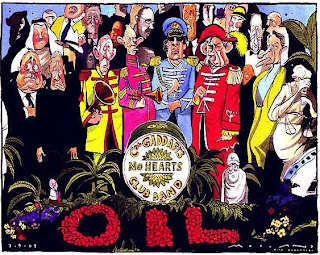 Oh yes, he did have a band. It's called the "No Hearts Club Band". The band members include all the dictators, kings, sultans or emirs, presidents, of many countries in the Middle East and Africa. Them who have been in power for 10 years, 30 years, 40 years or more. 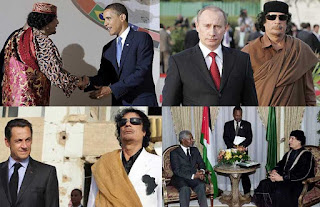 More fashion with more state leaders. This must be during the G8 summit in Italy in 2009. Clockwise from top left: With US Pres. Barrack Obama, Russian Pres. Vladimir Putin, UN Sec-Gen Kofi Annan, and French Pres. Nicolas Sarkozy. 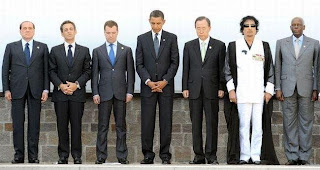 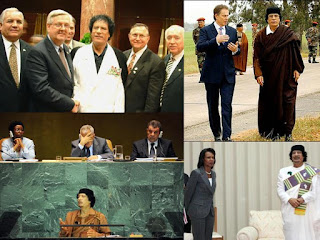 From top left, clockwise: with some members of US Congress, undated; with former UK Prime Minister Tony Blair. Possible conversation: Gadhafi: Push your human rights agenda and get your oil from Timbuktu. Blair: No, no, I was not talking about human rights. I was talking about... oil, precisely. :-)

Former US State Secretary Condi Rice... she seemed to be distancing from him. Was he making advances on her? :-) Gaddafi at the UN. He used to head the UN human rights commission, sometime in the mid-80s. 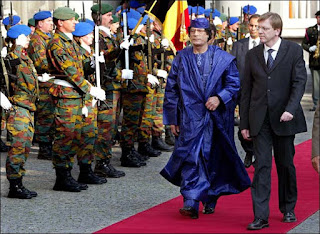 A visit at the EU. 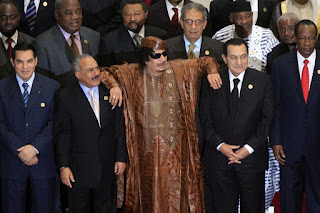 With other African leaders. Coat and tie is too boring for him. 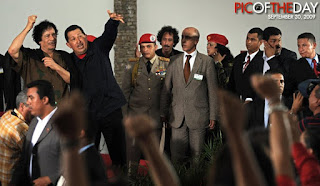 Celebrating with another dictator from another continent, Hugo Chavez of Venezuela. 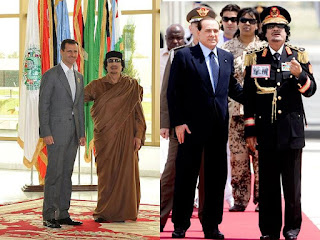 With the President of Syria, Bashar Al Assad. 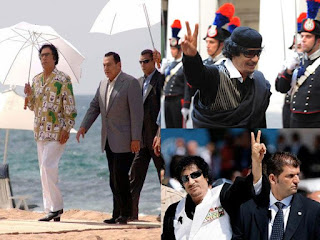 With long-time buddy, former Egyptian dictator Hosni Mubarak. With the latter's expulsion from power in a disgraceful manner, he offers "Peace man! Let there be 'peaceful and orderly' transfer of power." 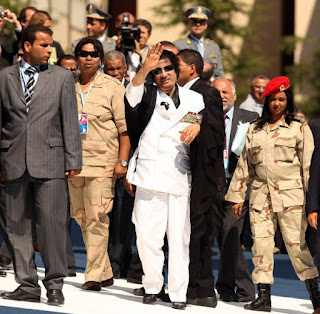 This should be the future picture of the dictator taken from the past -- waving goodbye to supporters and boot-lickers as he is leaving office for good.

do you think he's gay?

I think he's an AC/DC. He's got 7 sons, not sure if all are his biological sons or adopted. And he definitely likes female dress. So maybe he just swaks with a male or female partner.