CO2 is a Useful Gas

Anthropogenic global warming (AGW) fanaticism has resulted in the bastardization of a number of scientific facts. One of which is the declaration that carbon dioxide (CO2) is a harmful, pollutant and evil gas. 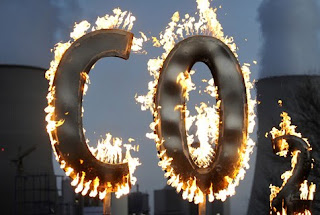 CO2 was demonized by the warming camp, saying that more of it in the past century contributed to "unprecedented global warming." And more of it now and the future will cause our planet's average temperature to rise by 4 C, even a worst case rise of 6.4 C, at the end of this century or just 90 years from now. Thus, they say, CO2 should be heavily regulated via various man-made restrictions like carbon taxes and carbon cap and trade.
The gas that we humans exhale is CO2. The gas that our dogs, cats and other pets, as well as our farm animals exhale, is CO2. Tha gas that our rice, corn, orchids, apples, mangos, other plants and trees use to produce their own food, is CO2. So how can this very useful gas now declared as an evil gas?
The quick answer is: politics, and deep desires by political institutions like governments and the UN, to have more power in their hands to regulate, to tax, people around the world.
There is a good article today in WUWT blog, CO2 is Plant Food (Clean Coal, Say WATT?) written by Ira Glickstein, a systems engineer. She gave this illustration and wrote: 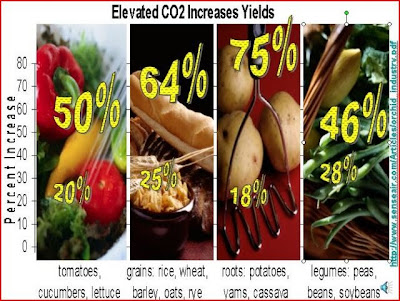 The current concentration of CO2 in the atmosphere is about 390 ppm (parts per million). Doubling or tripling that level in a CO2 greenhouse can greatly increase the yield of many crops. It turns out that 1000 to 1400 ppm is ideal for increasing production of tomatoes, cucumbers and lettuce by from 20% to 50%; grains such as rice, wheat, barley, oats, and rye by from 25% to 64%; roots such as potatoes, yams, and cassava by from 18% to 75%, and legumes such as peas, beans, and soybeans by 28% to 46%! It is likely that genetic engineering could develop new food crops that would thrive in CO2 levels of 2000 ppm or even higher, greatly increasing yields.

CO2 is essential to photosynthesis, the process by which plants use sunlight to produce carbohydrates – the material of which their roots, body, and fruits consist. Increasing CO2 level reduces the time needed by plants to mature. CO2 enters the plant through microscopic pores that are mainly located on the underside of the leaf. This enables plants to combine CO2 and water, with the aid of light energy, to form sugar. Nutrients and water uptake usually increase with higher levels of CO2 and plants develop larger, more extensive root systems that allow them to exploit additional pockets of water and nutrients, and spend less metabolic energy to capture vital nutrients. The chemistry is as follows:

There. Real science says that CO2 is a useful gas, while voodoo science says it is a pollutant and an evil gas. If people think that it is indeed a pollutant, then they should not kiss their partners/spouses lips to lips for long, or they should not talk close to their kids and friends. Otherwise, they will pollute and poison them.
This is a clear bastardization of basic biology that we took in elementary and secondary schools. They do it because of politics and their ecological-energy central planning agenda. 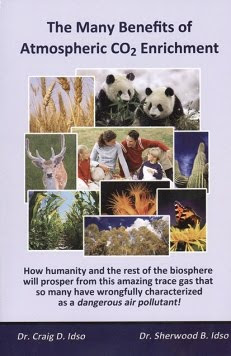 It is good that some independent scientists help combat this bastardization of basic science. Like the son-father authors of this new book, The Many Benefits of Atmospheric CO2 Enrichment, Dr. Craig Idso and Dr. Sherwood Idso. The book is subtitled How humanity and the rest of the biosphere will prosper from this amazing trace gas that so many have wrongfully characterized as a dangerous air pollutant.

Anthony Watts of WUWT has a new review of the book today at The Benefits of Carbon Dioxide. WUWT is among my favorite science and climate blogs. Lots of good papers there.

Two years ago, Dr. Craig Idso, a geographer-climatologist, partnered with Dr. Fred Singer, an atmospheric physicist, in writing and editing a comprehensive book, Climate Change Reconsidered. It's almost 900 pages long, published by the Heartland Institute. To read more about this book, visit the NIPCC website.

So let us not believe the UN and its attached environment/climate agencies (UNEP, WMO, IPCC, FCCC), Al Gore, the World Wildlife Fund (WWF), Greenpeace, other alarmist environmental groups, when they say that CO2 is a pollutant and evil gas.
Posted by Bienvenido Oplas Jr at 4:32 PM