Militarization and parasitism of the economy

My friend, Benson Te, posted this graph below in his blog article yesterday, How Militarization Diminishes Economic Competitiveness . 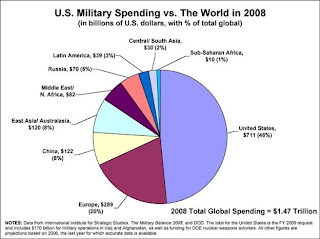 In 2008, the US government spent some $711 B of American taxpayers' money on military spending. It was followd by Europe with $289 B, China with $122 B, East Asia and Australasia $120 B, Middle East and N. Africa with $82 B, Russia $70 B, S. America $39 B, Central/South Asia with $30 B, and Sub-Saharan Africa $10 B. Total global military spending was estimated at $1.47 trillion! Original graph source is the Center for Arms Control and Non-Proliferation.

I believe that the bigger the military spending of an economy and the plentier the number of soldiers and army bureaucracies, the more parasitic the government is. With the exception of a few countries which have clear and explicit threats of internal and external aggression like Israel, many countries with large armies simply have parasitic, if not outrightly corrupt, governments.

This is because military activities and spending are unproductive, even destructive exercises, which distort the incentive system in the economy. A person will have a more stable income and future if he is a military official than becoming an entrepreneur that is subject to endless competition from other businessmen and investors. The distortion creates some economic and business hardship somewhere as the taxes and fees have to be high, partly to sustain the huge military establishment.

Where there is economic hardship, poverty will not be far behind. Poverty and social dislocation can invite anti-social and rebel behavior in some people, which necessitates expanding the army and training and arming them more. And a vicious cycle is created.

A free society that does not bleed its citizens with various coercive taxes, regulatory fees, fines and penalties, will have a dynamic economy. Which unleashes high entrepreneurial spirit among the people. People would rather cross national and continental borders with their various goods and services, with their music, culture and sports, than cross border with guns, tanks and bombs.
Posted by Bienvenido Oplas Jr at 4:59 PM

thanks for the plug Noy!