Climate alarmists and warming fanatics tend to connect almost everything unexplainable or socially undesirable as due to "man-made warming" or simply "climate change." Among such alarmists is Paul Krugman, an Economics Professor at Princeton University and a columnist in the New York Times. 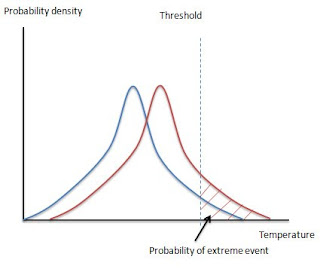 Now, what's wrong with this graph? Even assuming that "man-made warming" is true and not fiction?

In another article by Krugman 3 days ago, Droughts, Floods and Food, he wrote,

We’re in the midst of a global food crisis... The consequences of this food crisis go far beyond economics. After all, the big question about uprisings against corrupt and oppressive regimes in the Middle East isn’t so much why they’re happening as why they’re happening now. And there’s little question that sky-high food prices have been an important trigger for popular rage.

Wow! Krugman's logic can be shortened as: 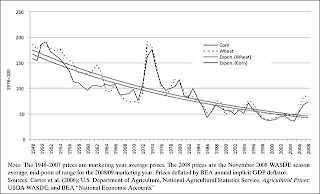 This graph is originally from Daniel A. Sumner's paper, RECENT COMMODITY PRICE MOVEMENTS
IN HISTORICAL PERSPECTIVE. Then Dr. Roger Pielke Jr., a Professor of Environmental Studies at Univ. of Colorado at Boulder, used this graph in his article, Krugman Loses Perspective. The graph simply says that food real prices (ie, minus inflation), corn and wheat from 1946 to 2008, were falling, not rising.

Krugman and other alarmists should be referring to nominal prices (ie, inflation included) of food as ever-rising. Well, not only food, but also the nominal prices of shoes, pants, beer, hamburger, cellphones, and so on, are rising. 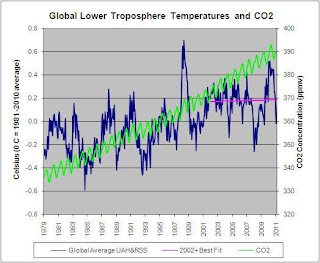 Here's the composite satellite temperature of the lower troposphere from the Univ. of Alabama in Huntsville (UAH) and the Remote Sensing System (RSS). The combined UAH-RSS temperature of the air from January 2002 to January 2011 showed a flat trend, zero increase or decrease in global temperature. The years 1998 (big El Nino), 1999 to 2001 (big La Nina) are outliers, so the trendline was started in 2002. Graph source is the Friends of Science.

And note that CO2 concentration in the atmosphere keep rising. From about 330 parts per million (ppm) in the 80s to 390 ppm in 2010. They say that "more CO2 will lead to more warming." The causality is absent, at least over the past 10 years. See also UAH graph of air temperature anomaly for January 2011, which has gone negative, -0.01 C and the extent of La Nina in Pacific Ocean's Nino region 4 at my recent article, Warming causes cooling sham.