(Notes: (a) this is my article today in thelobbyist.biz with original title, RE and Energy Cronyism. (b) Picture of a fozen and temporarily useless wind farm is from WUWT, and (c) Pictures of powerpoint slides are from Mr. Vince Perez's presentation. Click on those pictures to get larger images.) 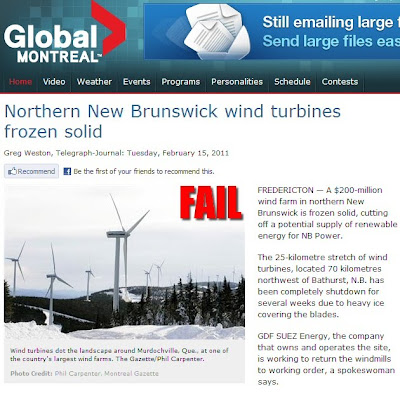 This is happening now, after the enactment of the Renewable Energy Act or RA 9513 in December 2008, and its implementing rules and regulations (IRR) became effective in June 2009.

The law is highly distortionary as it will give assured revenues and profit for the developers of immature, expensive and unstable power supply like solar, wind and ocean energy. A normal business in a competitive environment does not work this way. There is no “assured or guaranteed profit”, there are only possibilities of business expansion or bankruptcy, depending on how efficient a company is in producing the products and services needed by the consumers and the public.

The favoritism and cronyism given by the law and its IRR to RE developers and companies are too much compared to the various regulations and taxation imposed on non-RE companies and developers, when both simply produce energy that our houses, offices, schools, malls, computers and cell phones need. 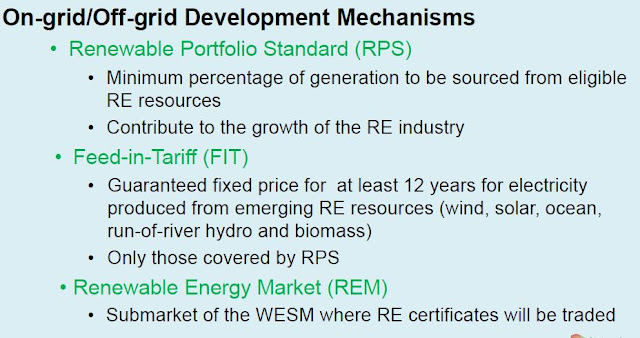 Several schemes in the law and its IRR assure the developers of RE companies but the two most important ones are the Renewable Portfolio Standard (RPS) and the Feed-in-Tariff (FIT).

RPS is giving minimum percentage of generation to be sourced from eligible RE resources. FIT is giving guaranteed fixed price for at least 12 years for electricity produced from emerging RE resources (wind, solar, ocean, run-of-river hydro and biomass). See the presentation by former DOE Secretary Vince Perez, Status of Renewable Energy Policy in the Philippines presented in June 2009. 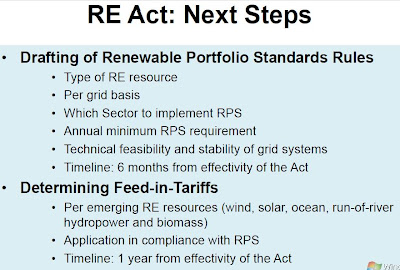 These two schemes immediately assure the RE companies of guaranteed markets and buyers, even if current RE costs per kwh are high, between 2x to 5x the prevailing rates, and even if RE supply is unstable and unreliable. Us energy consumers will be forced to pay for their more expensive energy output, on top of the already expensive energy costs. The ballpark figures are about 15 centavos per kwh add-on to the already high energy costs. 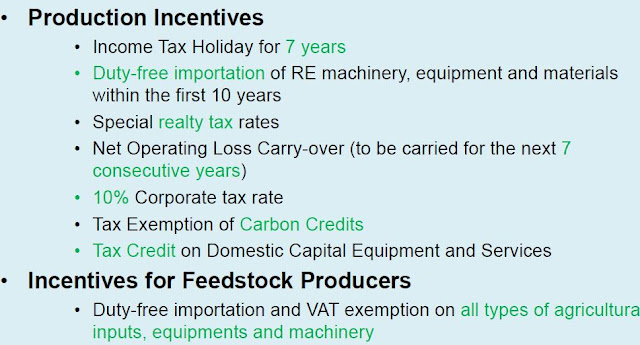 And aside from the above guaranteed market at guaranteed price, there are lots of other incentives given to RE companies that are absent or not provided to non-RE companies. These freebies are: (a) Income Tax Holiday for 7 years, (b) Duty-free importation of RE machinery, equipment and materials within the first 10 years, (c) Special realty tax rates, (d) Net Operating Loss Carry-over (to be carried for the next 7 consecutive years), (e) 10% Corporate tax rate, (f) Tax Exemption of Carbon Credits, and (g) Tax Credit. 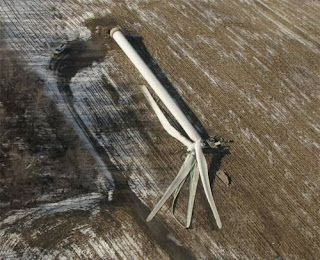 If the government is hungry for more revenues to plug its endless and annual budget deficit, to pay its ever-rising interest payment (constituting on average one-fifth of total expenditures of the national government) due to its ever-rising public debt, why would it give lots of income tax holidays to RE companies?

The quick answer is that the government will slam-dunk the other companies and private individuals with the heavy burden of existing taxes (like 32 percent personal income tax, 30 percent corporate income tax, VAT, doc stamp tax, import tax, etc.).

Mr. Perez’ presentation also has a table entitled "Comparison of RE Promotion Policies, Asian Countries". The Philippines is giving away so many freebies to RE companies, but not to non-RE companies. It is a give away admission of how much favoritism and cronyism the RE law has created. 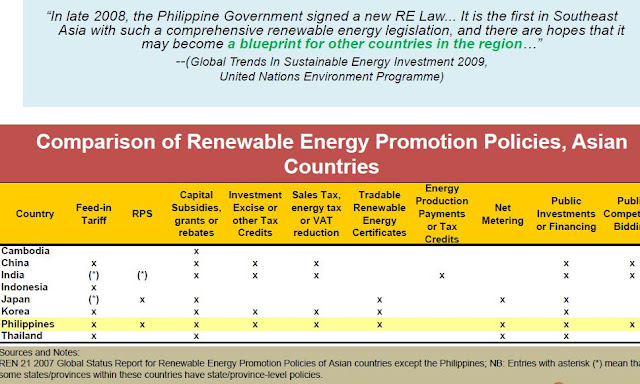 Then there are two new bureaucracies created by that law. One is the National RE Board (NREB) to be composed of different government agencies to some private sector players. The other is a technical secretariat, the RE Management Bureau (REMB).

The scientific, economic and business distortions created by the man-made warming scam keep increasing. And we taxpayers, we energy consumers, will pay for all those distortions and rent-seeking behavior by certain government agencies in cahoots with new crony companies and NGOs.
-------