Here's my continuing survey of how terrible the current global warming is in Asia. Here's Part 2 of this series)

Wear your long johns. That's the message from the South Korean government to citizens this week as record cold weather strains electricity reserves across the country.

The temperature in Seoul hit a decade-low of minus 17.8 degrees C (0 degrees F.) on Sunday, and other parts of Korea are seeing the coldest weather in 96 years. As Koreans turn up their radiators to keep warm, energy usage in the nation has hit record highs. Demand for electricity exceeded 71 gigawatts last week, leaving only 5 percent of the country’s reserves available.... 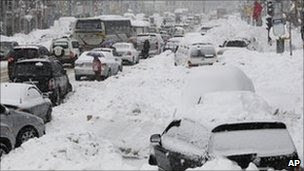 The heaviest snowfall in more than a century on South Korea's east coast is causing widespread chaos.

Hundreds of houses have collapsed under the weight of the snow. One newspaper described it as a snow bomb.

The BBC's Nick Ravenscroft in Seoul says that although winters are colder than anywhere else at its latitude, with frequent frost and snow, this year has been different. January was the coldest since the 1960s.

In Gangwon on the eastern coast, one city recorded 80cm (2.6 feet) of snow in a single day - the heaviest fall in 24 hours since records began there back in 1911...

The Han River in the capital, Seoul, iced over for the first time in years - but the latest snowfalls have left the capital unaffected so far.

A wave of extremely cold weather this winter is a suspected factor behind the ongoing spread of avian flu in Japan, according to ornithologists.

Flocks of migratory birds infected with an avian flu virus may have arrived in parts of the nation after advancing farther south than in an average year, instead of wintering on the Korean Peninsula. Their arrival may have been an attempt to avoid a wave of cold weather in continental Asia that has intensified since the beginning of this year, experts said.

"The spread [of avian flu] may have become even greater as a result of these birds arriving in this nation after migrating through such highly virus-dense areas as Siberia, China and Mongolia," Hiroyoshi Higuchi, a professor of ornithology at the University of Tokyo, said....

BEIJING, China - Snow and icy roads are causing travel woes in southern and eastern China ahead of the Lunar New Year holiday, which unleashes the world's biggest annual human migration.

Snow and freezing rain at airports in China's eastern cities of Hangzhou and southwestern region of Chongqing stranded hundreds of travellers this week, the official Xinhua News Agency reported Thursday.

Heavy snow and ice hit the regions of eastern, central and southwestern China this week, slowing traffic, delaying flights and shutting off power, the report said. In the southern region of Yunnan, snow and ice shut down power stations in eight cities...

The Chinese New Year holiday ended Monday, and now the weather is expected to become cold again. According to the Central Weather Bureau's (CWB) report, a strong cold front will arrive Friday, bringing the temperature down to under 10 degrees Celsius in the northern Taiwan. T

he CWB suggests people to grasp the winter sun of the next few days and enjoy the good weather until it turns cold again....

As Hong Kong shivers through its second-longest cold spell since 1885, scientists point to global warming to explain the abnormal cold weather phenomenon worldwide...

Hong Kong yesterday recorded its second- longest cold spell - 21 days. The longest cold period - when temperatures fall below 12 degrees Celsius - lasted 27 days in 1968. This record is expected to remain intact as the thermometer is forecast to register a low of 13 degrees by Sunday.

Hong Kong has also experienced more than 456 hours of cold weather this winter - more than double the 205-hour record in January 2004...

The Public Health Ministry confirmed yesterday that at least two people had died in the cold weather - one in Loei and the other in Chiang Rai.

"Victims in this category are people who died because they lacked warm clothes and lived in areas declared as being hit by a cold spell," Public Health Minister Jurin Laksanawisit said.

In recent days, temperatures have dropped across most of the country.

HA NOI – The total number of cows and buffaloes frozen to death in Viet Nam has reached 23,000, the Ministry of Agriculture and Rural Development's Livestock Breeding Department said yesterday.

Minister Cao Duc Phat has instructed provinces from Thua-Thien-Hue northward to establish working teams to instruct in food and shelter measures to help cattle and poultry cope with the chill and hunger.

Terai is hardest hit with most deaths. Repeated blackouts have cut power to hospitals, factories and airports. Hundreds of schools have been closed to avoid further loss of life. Only Catholic schools have remained open for those who want to go to class despite the bad weather.

According to local doctors, people who fled fighting during the Maoist-led insurgency but still living in tents or makeshift shelters are most at risk...

According to the Metrological Department of Pakistan rain is expected in different parts of the country. Along with the rains, the temperatures are expected to drop significantly and the cold weather is going to intensify.

Posted by Bienvenido Oplas Jr at 9:45 AM