(Note: the original title of this article was "Rising Cancer Deaths")
related articles in this blog 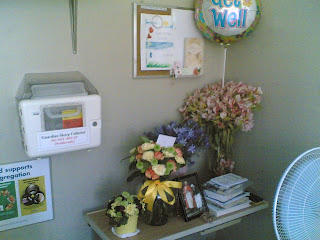 Today is the 10th day of the death of our beloved Ninang Telly Goce-Dakila. She fought a rare breed of cancer, "leiomyosarcoma" for about a year. In her remaining days in the hospital, my wife would give her flowers on some weekends, like in this photo. She liked it.

In my first book, "Health Choices and Responsibilities" that was published last month, I included her in the Dedication. I wrote there, "...Cristela, one of our wedding godmothers, a brave and cheerful fighter currently battling a merciless disease crippling her body." I wrote it around January 12, 2011, then submitted to the publishing house. January 22, the book was delivered to me. That day, I went to the hospital and gave her a copy of my book. Though she was already weak, she managed to browse through the pages, saw the Dedication. I was told that she proudly showed the book to her physicians and visitors. A week after that, Ninang Telly died. Another victim of a merciless disease called cancer.

Last week, February 4, was the World Cancer Day. There was a report that day, Cancer on the Rise in Developing Countries: Report,

In fact, the majority of the world's new cancer cases and deaths (7.1 million and 4.8 million, respectively) are now occurring in economically developing countries, the authors of the report noted. And this, they say, reflects the growing adoption of unhealthy behaviors -- such as smoking, sedentary lifestyles and poor diets -- that typically accompany economic development.

The report, "Global Cancer Facts & Figures," highlights lung, breast and colorectal cancers as being particularly vulnerable to this dynamic.

...about one-third of all cancer deaths that occurred worldwide in 2008 (equal to roughly 7,300 deaths per day) might have been avoided by focusing on preventable risk factors such as smoking, drinking, infection patterns and dietary habits.

...as stark as global disease figures already were in 2008 (12.7 million new cancer cases and 7.6 million cancer deaths), those numbers are expected to almost double by 2030 as the world's population both grows and ages.

Perhaps Ninang Telly's cancer belonged to the other two-third which are not related to unhealthy lifestyle as I know that she was very careful with her diet and health.

Cancer has killed my elder brother (prostate C), his wife and my sister in law (colon C), my mother's first cousin (also prostate C), and two of our wedding godmothers already. It seems that cancer is now the number 1 killer disease in the Philippines and many other countries. 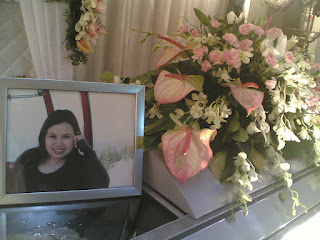 I sincerely hope that modern medicines, vaccines and other treatment will continue to evolve and improve in order to save more productive lives. It is one of the central arguments of my book that political intervention in health like drug price control only offers short-term political benefits to politicians and patients but cause more long-term damage by discouraging the entry of more powerful, more disease killer drugs and treatment into the country as there are politicians and political threats awaiting the inventors of such modern drugs and treatment.

As the number of cancer deaths keep rising worldwide, politics should step back, modern science and medicines should advance. Prices of drugs and treatment will always be an issue but so long as there is competition among drug producers, pharmacies, hospitals, cancer specialists and other health professionals, "excessive" pricing will be minimized.

later on May 4, there was a two-fer. On top, there was a misspelling of Victoria, and on bottom writing research proposals women should have been woman. Then,