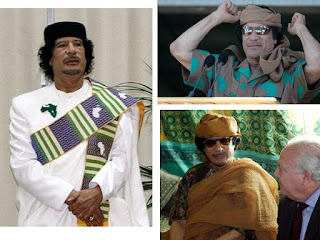 I just realized that there are many other pictures of different fashion and apparel by the Libyan dictator, Muamar Gadhafi (or "Gaddafi", "Qaddafi", "Qadhafi", "Qaddafy", there could be a dozen or more spelling of his name).

It should be too space-consuming if I put the pictures one by one here, so what I did, I compiled them 2 or 3 pictures per slide. Sources of the pictures are many too. So instead of searching the web sources of the pics, I will just put a clear disclaimer: ALL pictures here were taken from the web, not one of which I personnally took. 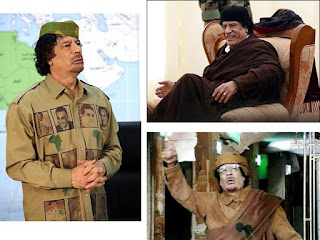 Left dress is a picture of the famous African political leaders in the past, including one of his idols, Naser of Egypt who articulated the pan-Arab world.

Lower right picture is among his most recent pictures, speaking on tv, rallying his supporters to keep supporting him and to attack those who oppose him. 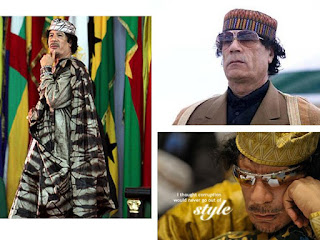 I think it was Time magazine which coined the left-most picture as among the "worst dress" by a country leader sometime in the last decade. 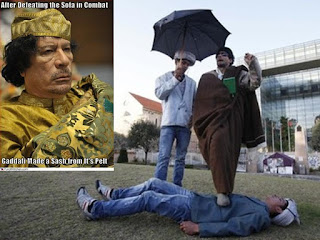 And what is this, the man holding the Green Book as he steps on another man, to emphasize the weight and power of the "ideas" contained in that book? 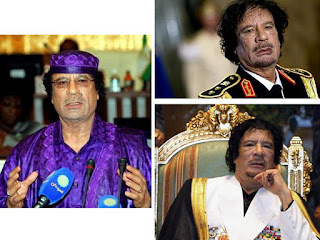 Nice hair-do without the cap, he looked like a drug addict :-) 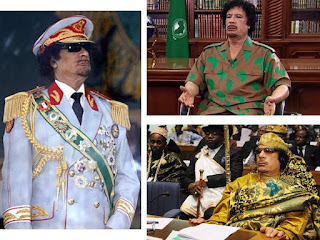 Sometimes he's a military general, sometimes a casual dresser, sometimes fully covered from head to toe, except the face and hands. What a guy. 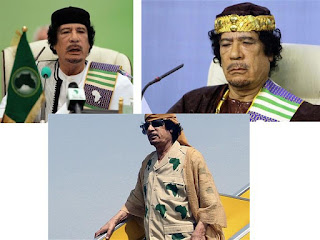 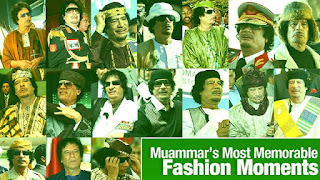 More "comprehensive" photos from the web :-)

Meanwhile, the dictator and his army, thugs and mercenaries have already killed several hundreds. The specter of losing endless resources and privileges to dress in whatever fashion he wants scares him and his supporters a lot.
Posted by Bienvenido Oplas Jr at 3:50 PM