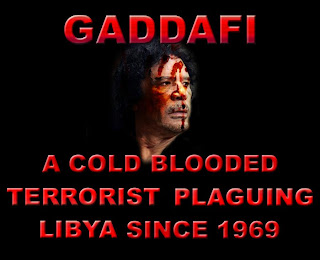 As of this writing, Libyan dictator Muamar (or "Muammar" or "Moamar", etc.) Gadhafi (or "Gaddafi" or "Qaddafi" or "Khadafi"...) is getting more isolated especially in the international community but still holding out. He should have more surprises in his sleeves, the way he was able to stay in power for 41 years, going 42 this year.

We read in the news various names of opposition leaders in certain areas within or outside of Tripoli. 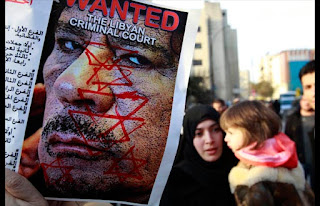 But these names are generally "new and strange" for new watchers of the political development in the Middle East-North Africa in general, and Libya in particular. Mr. Gadhafi has succeeded in crippoing political opposition to his four decades in power. In fact we read more the names of his sons, those who were primed and trained to succeed him, than the names of any stand out political opposition leaders.

This is a real problem for countries under dictatorship for many years. Only the dictator and his few powerful supporters, the military leaders, are trained for political succession, and their main agenda is simply to continue the "happy days". 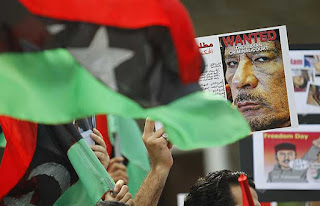 A few Filipino friends who work in Libya -- they should be on their way back to Manila already, if not here already -- told me last week that there is a big question mark of who will succeed Gadhafi if he is toppled in power as an organized and disciplined political opposition was generally absent. On the days of demonstrations against the dictator in Tripoli, there were several instances of looting, burning and plain disorder. Meaning the political unrest was an opportunity for thieves and other criminals to come out as there was no clear organized group/s yet who can discipline those thugs and criminal opportunists. 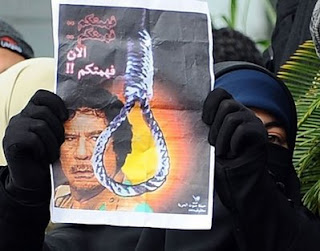 The way things are going, with more explicit pronouncements and warnings from leaders of more powerful countries like the US, Gadhafi is not going to last long. The question only is how much destruction in properties, how many hundreds of casualties and injured people more, will be sacrificed before Gadhafi, his family and closest supporters, will be toppled.

Should that event happen, the next step is to institute a democracy in the shortest time possible. That the next set of leaders will be popularly supported, and not just a rehash of past Gadhafi supporters who suddenly became "opposition". Then bring to a national or international court Mr. Gadhafi and his family so that past crimes will be unearthed and accounted for.

The institution of democracy is not the ultimate goal per se, in Libya or elsewhere. Rather, it is the promulgation of the rule of law. Thieves, plunderers and murderers must face the courts and be appropriately penalized. A clear statement should be made to the public and the succeeding governments. The law against stealing, the law against killing, the law against corruption, should be upheld at all times in all places. Whether the country is under a democracy, autocracy, theocracy or other forms of government.
Posted by Bienvenido Oplas Jr at 11:04 AM

One big thing emerging from all these upheavals: they don't require BIG government actions -- and minimal taxes -- on the part of the U.S. government. Which brings me to to conclude that democracy can flourish from within and doesn't need to be carried "on the backs of Rumsfeld's tanks".

I also think the same way. The Libyan freedom fighters, civilian or soldiers, would treasure the idea that they themselves solved the Gadhafi problem, with no US or European soldiers/mercenaries and tanks. Perhaps a "no-fly-zone" and immediate arms embargo, on top of international isolation, would be huge factors to weaken Gadhafi and his forces.

though i appreaciates a lot the courage of the liberians, but it is much better if no human been wasted...may this mess ends so soon..