Hockey stick of this blog

The "hockey stick" graph is famously associated with Michael Mann of Penn State U. His graph showed a generally flat, very little up and down, global temperature variations for the past 1,000 years. Then in the mid-1800s, coinciding with the Industrial Revolution, the temperatures suddenly shot up. The shape of the graph resembled like a hockey stick, generally flat then a sudden spike upwards. That's why they called it "unprecented warming" (no precedent, no period in the past was warmer than the last century's warming) caused by humanity or simply called "man-made warming".

Of course that graph was later proven to be a hoax as there are hundreds of peer-reviewed articles that showed that the medieval warm period (MWP) indeed occured sometime in the years 800 to about 1300, and such period was warmer than the past century's warming. So that graph was later ridiculed as "Mann-made warming". :-)

This blog attracts a modest viewership. Its latest data, January 2011, has nearly 11,500 pageviews in one month, or something like 380 pageviews per day on average. Not big but not bad either. The first two weeks of this month showed generally the same pattern.

Until about 1 hour ago. The blog experienced a "hockey stick" graph in pageviews, see here. 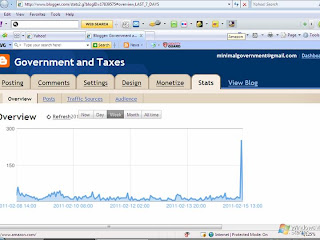 About 250 pageviews in one hour! Why? I'm wondering. There may be a big group of people who suddenly got interested in my blog, they watched it, some 100+ or 200+ of them. Maybe they are curious, or some of them are plotting against the blog and its contents?

Hmmm, if they're studying my writings to plan a more coordinated way to counter-attack, I'll be happy to face them. Yuhooo, come on in!

But if they are simply curious and are happy to read my blog and learn from it, Yuhooo! visit this blog daily! :-)

Thanks readers.
Posted by Bienvenido Oplas Jr at 1:05 PM