The mystique of wind, solar and other renewable energy sources keeps floating, mainly to help 'save the planet". It's a mystique and paranoia at the same time that drives certain energy policies in many countries to irrational levels. Like pouring lots of taxpayers money to subsidize these renewables, or jacking up the cost of electricity to households and businesses.

We zoom in on wind power. In Germany, period covering 1990 to 2011, capacity utilization for (a) wind about 15%, (b) solar about 10%. The other renewables have higher utilization rate.

Call it communist power management. In the communist days it took 10 men to the job of one man in a free market. On the energy market, it takes 5 green generators to do the job of a single conventional generator.
Little wonder that Environment Minister Peter Altmaier says Germany’s transition to green energy is going to cost $1.3 TRILLION dollars if the madness isn’t stopped soon.

Is this something that one can be proud of, while paying very high energy costs? If you install a 100 MW wind or solar, you also need to install 100 MW of conventional power as back up because power from wind and solar is very erratic and unstable. If they produce only 10% or less, one must turn on the nearby conventional power, or suffer blackouts. They have that blackouts in the richest economy in Europe. 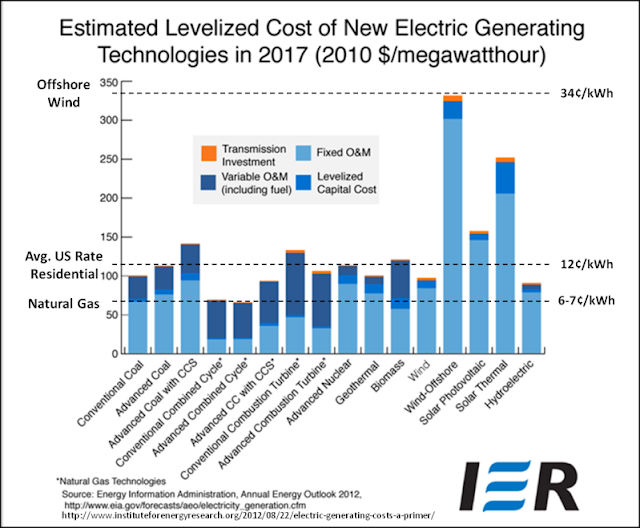 Wind at 5x the cost of natural gas and 4x of coal and other conventional power sources, is this glamorous?

The above article further noted,

The much ballyhooed Cape Wind project, off Cape Cod, is projected to have a 454 MW installed capacity. It will cost approximately $2.5 billion to build. This works out to $5,506,608 per MW. A natural gas plant generally costs less than $900,000 per MW.
Cape Wind currently has a long-term contract to sell half its output for 18.7¢/kWh. The average U.S. residential rate is in the neighborhood of 12¢/kWh.

$1.7 billion in taxpayer-funded subsidies divided by 200 MW works out to $8.5 million worth of SUBSIDIES per MW of installed capacity!!! They could build 2,000 MW of natural gas-powered generating capacity for the cost of just the subsidies…

No wonder why stock prices of the renewables have been declining, another case of renewables bubble burst.

And yet we are enamored with stories and promises of wind power. Like this which says, "25% of Denmark is now powered exclusively by wind." 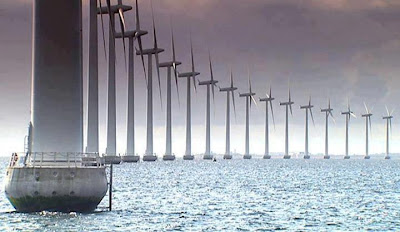 Am curious what is the actual power generation out of Denmark's total installed cap of wind. They will be very very lucky if they get 25%.

And the famous Bangui wind power in Ilocos Norte, 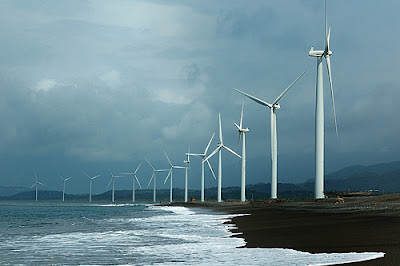 The owner of this wind farm is a renewable energy corporation owned by Vince Perez. Vince is former Secretary of the Department of Energy (DOE). The Renewable Energy law was enacted during his term. When his term at DOE ended, he headed two renewable energy companies and also chaired the World Wildlife Fund (WWF) in the Philippines. WWF is a strong lobbyist for more renewables, which are highly uneconomical and made "economical" only via feed in tariff (FIT) and renewable portfolio standards (RPS). Meaning we electricity consumers in the Philippines will pay even higher to subsidize those uneconomical and costly wind farms.

Ok, don't get me wrong. I have nothing against renewables per se -- wind, solar, biomass, etc. They are useful, especially for off-grid areas like remote and/or island municipalities. What I am against is forcing us taxpayers and energy consumers to subsidize these power sources. Meaning more taxes and/or more expensive electricity. People who believe that renewables help "save the planet", then let them pay the full cost of power generated, that should be fine as it allows them to walk the talk. But forcing the rest of us for this fooly is simply dictatorial.

Ohh, enjoy this photo too. 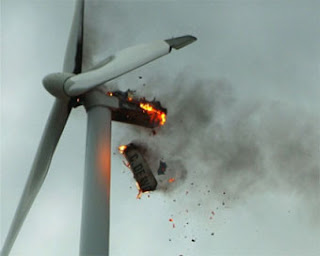 it would be good to at least help a little to slow climate change. money can't save the planet, what we do will.

CC is true and it is purely natural. Warming-cooling-warming-cooling, in endless natural climate cycles. With or without humans and their cars or bicycles.